The Blank Center for Stuttering Education and Research officially opens Atlanta center with a ribbon-cutting. (Photo by Maria Saporta.)

Atlanta now has a new center dedicated to stuttering education and research, thanks to a $12.25 million grant from the Arthur M. Blank Family Foundation.

A ribbon-cutting was held on Tuesday to dedicate the first satellite location of the Arthur M. Blank Center for Stuttering Education and Research at the University of Texas at Austin’s Moody College of Communication.

It builds upon a $20 million legacy grant the Blank Foundation provided in 2020 to expand the stuttering program started by Dr. Courtney Byrd in 2003.

For Arthur Blank, chair of the Blank Foundation and owner of the Atlanta Falcons, the cause is personal. 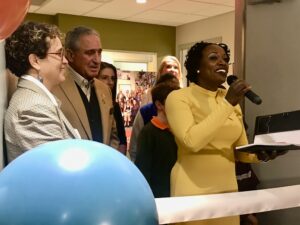 Dr. Kia Johnson, who will run the Atlanta satellite of the Blank Center, speaks before the ribbon-cutting. (Photo by Maria Saporta.)

“My connection to stuttering goes back to my childhood,” Blank said at the ribbon cutting. “I just had a very supportive mother who told me: ‘What you say is important.’”

Blank said stuttering has been part of his family for several generations, and they had previously attempted treatment to improve fluency.

Blank described meeting Dr. Byrd a couple of years ago when he was visiting the University of Texas. He immediately understood Dr. Byrd’s “unique approach” to effectively understand and treat stuttering.

“I felt a tremendous connection,” said Blank, who subsequently has visited the White House with Dr. Byrd to meet with President Joe Biden, who also openly talked about being a stutterer.

After the ribbon-cutting, Dr. Byrd spoke of the grand vision for the Blank Center — referencing how Arthur Blank was a co-founder of the Home Depot.

Plans exist to build 10 other satellite centers in the next decade — four in the United States and six around the world.

“We are trying to scale up, sort of like Home Depot,” Dr. Byrd said. “The Blank Foundation wanted to do everything they could to expand the Center worldwide.” 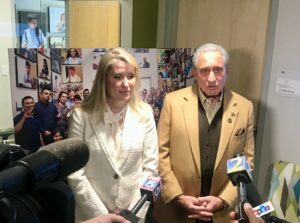 Dr. Courtney Byrd stands with Arthur Blank during a press conference following the ribbon-cutting of the new Blank Center for Stuttering Education and Research in Atlanta. (Photo by Maria Saporta.)

The ribbon-cutting included several testimonials, including one from Stephen Washington, who drove up from Dallas, Ga. to attend the ribbon cutting. The 42-year-old father, a stutterer, has two sons who also stutter. He took his youngest son to Texas to attend the “Dream. Speak. Live.” camp, an intensive treatment program that will soon be offered at the Atlanta center.

“It was an amazing experience,” said Washington, adding that part of his son’s learning was accepting that he stutters and not seeing it as a handicap. “It’s about being able to articulate what you want to say.”

The Atlanta location is currently open at 1605 Chantilly Drive NE and will be permanently housed at the new Arthur M. Blank Hospital at Children’s Healthcare of Atlanta, which is scheduled to open in 2025.

Blank said he was thrilled to see the center available for the people in Atlanta and throughout the region. In addition to developing other satellite centers nationally and internationally, the partnership will establish “Dream. Speak. Live.” camps throughout the world, including Nigeria, South Africa, Italy, Portugal, Germany, Ireland, Belgium, the Netherlands, Malta, Pakistan, Norway and Mexico.

The Blank Centers will also provide education for students and clinicians so that they are equipped to serve people who stutter. The Center provides evidence-based programming to treat children, teenagers and adults at no cost, and it creates a pipeline of expert clinicians and researchers to make quality, effective treatment accessible to all people.