Joining the Zoo Atlanta family is a teeny-tiny reptile. Why is the hatchling making headlines? Because the quarter-sized bog turtle, who hatched on May 21, is one of only about 2,500 left on earth.

The team is elated by this newest addition because, while the Zoo already has three adult bog turtles, this was the first time in three decades that one has been born there. 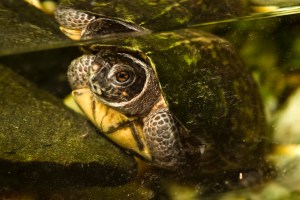 Bog turtles are one of the rarest species in the U.S., found in mountain bogs in the East, including north Georgia. In addition to its rarity, the bog turtle is also the smallest turtle species in North America — with hatchlings only about an inch long and full-grown adults coming in at around 4 inches.

For such small animals, Associate Curator of Herpetology Robert Hill said the scaly creatures have a lot of character.

“When you walk into the room where the adults are, they often poke their heads out hoping that you’ll give them an earthworm or something to munch on,” Hill said. “In the wild, they’re very cryptic and very hard to find, but the ones that live at the Zoo have big personalities for a tiny turtle.”

The herpetology team, which specializes in amphibians and reptiles, was on the lookout for eggs after one of the females was gaining weight and spending more time basking in the sun. One day during weigh-in, the team saw that she was significantly lighter, which told the team she likely laid eggs. After searching around the enclosure, they found two eggs buried in the substrate — a mix of moss, sand and soil. 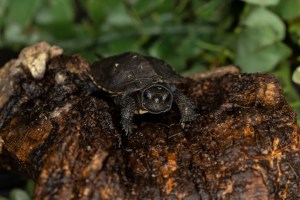 The new bog turtle is the first time the species has hatched at the Zoo since 1992. (Photo courtesy of Zoo Atlanta.)

The eggs were then placed in an artificial incubator, set to 78 degrees Fahrenheit, and about 37 days later, the hatchling emerged. Sadly, the second embryo was lost about halfway through incubation.

Now that the hatchling’s incubator days are behind it, the herpetology crew has crafted a natural habitat with food — like earthworms, crickets and turtle pellets — and artificial light because it’s still too little to hang out outside. The team will monitor its growth over time, and because of its size, the team won’t know whether the hatchling is female or male for a few more years.

The hatchling represents one step towards fostering this species, which has been deemed critically endangered since 2011. Bog turtles have reached this critical threshold because they are “habitat specialists,” meaning they require a very specific type of environment — the mountain bog — to survive. Like many other habitats, mountain bogs have become a rarity and have been altered due to human interference.

Mountain bogs are generally open habitats with a lot of sunlight, Hill explained, which are maintained by naturally occurring fires.

“With human development around mountain bogs — like building of homes and roads — the fires are not necessarily encouraged,” Hill said. “A lot of that natural fire regime that helps maintain the bogs isn’t there anymore, so the bogs get filled in by other plants that take up all the sunlight and suck up the water from the bog. Eventually, they become not suitable for the turtles.”

To aid the habitats in peril, the Zoo’s horticulture team joined forces with the Georgia Department of Natural Resources and The Nature Conservancy to provide maintenance and remove woody shrubs encroaching on bogs.

Another key threat is the illegal trade of this species, which folks aren’t allowed to keep as pets.

The species, along with other types of turtles, are illegally shipped or smuggled abroad due to demand, primarily in Asia, where they are used as pets, food or in traditional medicine, according to the Association of Zoos and Aquariums (AZA). The Zoo has joined the AZA SAFE American Turtles Program to help combat this illegal trade by confiscating the turtles and providing care.

“[AZA] is trying to establish a triage to care for some of those turtles, make sure they’re healthy, and, where applicable, try to get those animals back into the wild,” Hill said. “But a lot of times, they don’t know where exactly they came from, and there’s potential risks of spreading diseases that may not be within a natural area.”

Hill believes that protecting the bog turtle is essential and hopes to see its population grow because every species plays a role in the larger ecosystem.

“Everything has a place. Anything we can do to help counteract [their endangerment] is really important,” Hill said. “I think our responsibility as stewards of the environment is that we should be doing what we can to help protect even common [species], we should try to keep common and rare [animals], hopefully, make them a little less rare if we can.”