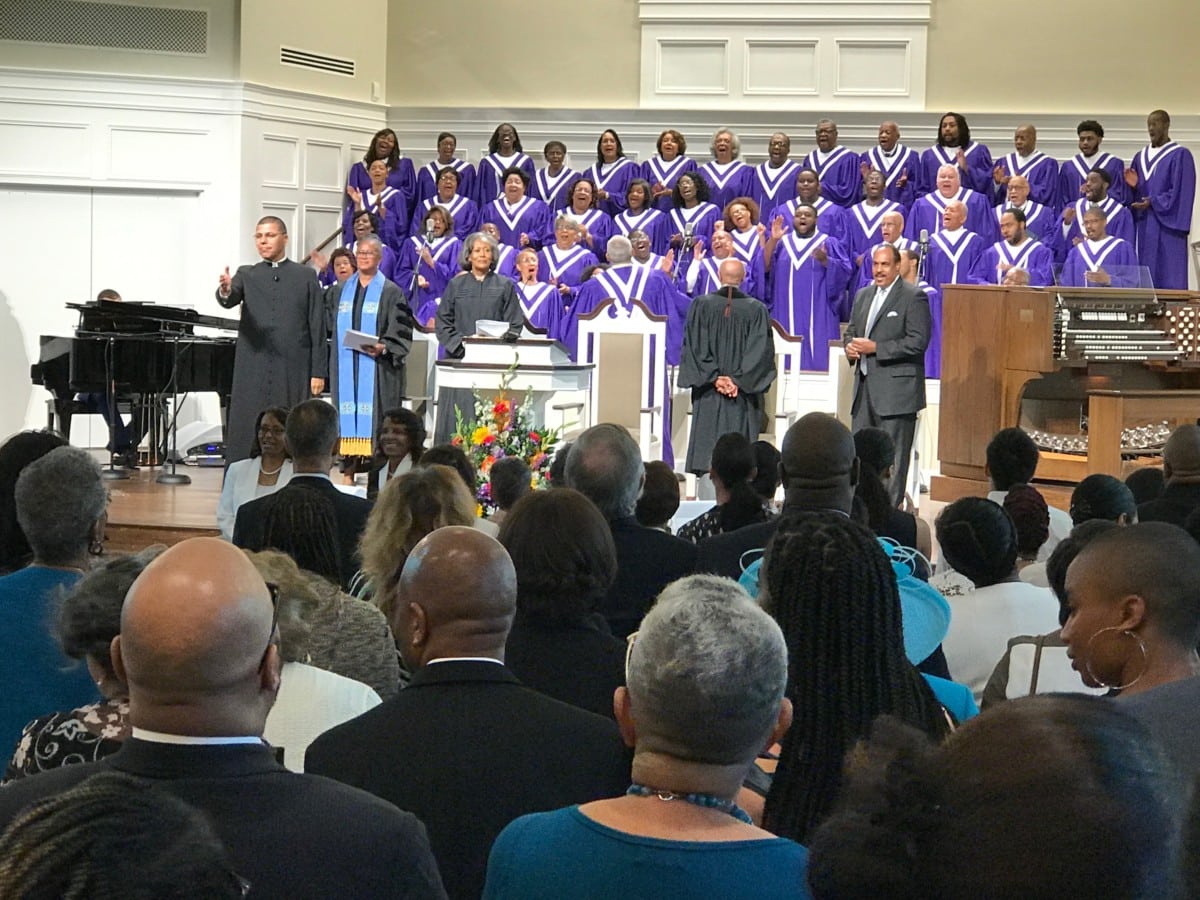 Friendship Baptist Church has its own home once more.

After three years of being in temporary quarters, the historic congregation of Friendship Baptist Church held its first service in its new home on Sunday.

At the first service, there were songs of rejoice and an uplifting spirit – following feelings of displacement, dissension and disorientation.

The new church, at the corner of Walnut Street and Beckwith Court, is only two blocks away from its former home where the Mercedes-Benz Stadium now stands. 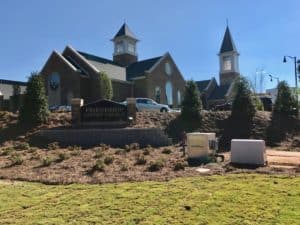 The historic church, formerly on Mitchell Street (now renamed Martin Luther King Jr. Dr.), had been a pivotal player in where the new stadium would be located. The congregation voted on Sept. 22, 2013 to sell its beautiful white-stucco church and adjacent for $19.5 million so a new stadium for the Atlanta Falcons could be built south of the existing Georgia Dome and near two MARTA stations – an option that became known as the “south site.”

Mount Vernon Baptist Church, across the street from Friendship, also was acquired for $14.5 million, so the new stadium could be built on that site.

The other option – the “north site” – would have placed the stadium closer to North Avenue and would have been a half-mile away from MARTA.

During and after that decision, strong sentiments were expressed, both within and outside the church walls, about two historic black churches having to be moved for a new football and soccer stadium.

Friendship Baptist Church is an institution that dates back to 1862, when it was started by 25 former slaves who formed the congregation with the help of white Christians. Originally, the church’s home was in a railroad boxcar that served as a place of worship on Sundays and as well as a classroom on weekdays.

Of special note, Morehouse College and Spelman College began in the basement of Friendship. The historic Friendship Church was built in 1895, where it stood until its last service in that location on May 25, 2014.

But Sunday’s service was one of celebration rather than looking back. 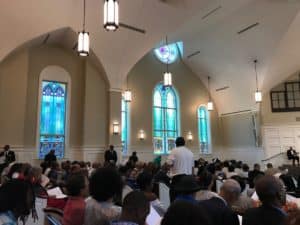 The leaders of Friendship incorporated the stained glass from its former home into the new church. New stained glass windows, in the style and colors of the historic windows, also contributed to the ambiance. Leaders also brought over its organ, which had recently been upgraded thanks to a gift from Henry and Billye Aaron.

“Our prayers have been answered,” proclaimed Friendship Rev. Angela Sutton. “We have a home.”

Deacon Robert Bozeman gave thanks to those who had helped make the new church a reality, including the construction workers. He also thanked Morehouse College for giving the Friendship congregation a place to convene over the last three years, and Providence Baptist Church, which gave office space to Friendship’s administration.

The day was especially rewarding to Rev. Dr. Richard W. Wills, Sr., who joined Friendship in 2015 and was giving his first sermon in its new home.

Not surprisingly, the theme of the sermon was: “We Shall Come Rejoicing.”

But Wills did allude to the challenges the congregation has faced over the past several years by mentioning the storms we all face in life.

“Storms are undeniable, unavoidable and inescapable,” Wills said. “Storms are a byproduct of human beings. We perpetually find ourselves in one of three life categories. Either we are in a storm or we have just come out of a storm or we are about to enter a storm. Although storms do come, they do not last.” 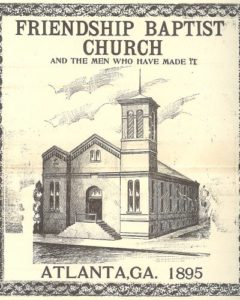 And then he referenced T. Bone Walker’s song “Stormy Monday” – telling folks to google it later.

The music at Sunday’s service was special. Joyce Johnson, Spelman College organist, played the organ. And Wills’ family friend – Joseph Joubert – was the guest pianist, delighting the congregation with his arrangements of “All Hail the Power/Holy, Holy Holy” and “I am on the Battlefield for My Lord.” And then there was the Friendship Chorus, which Wills proclaimed was the best in the country.

During his sermon, Wills also reminded the congregation of the work it needs to do to recreate a thriving community on the Westside. Referring to a passage in the Bible, Wills spoke of a people returning to a community that was dry and barren rather than a place it used to be where milk and honey flowed. And the people rebuilt their community with the help of God.

Wills is only the seventh pastor in the church’s 155-year history. 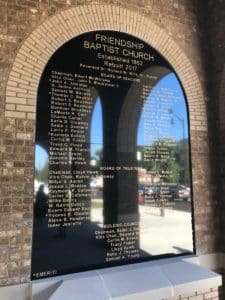 In fact, Rev. Guy, who served for 37 years, was present for Sunday’s opening of the new, larger church. It is nearly twice as large as the historic Friendship with a total of 44,000 square feet. The sanctuary seats 500 people compared to 325 in the former church. The Fellowship Hall has room for 450 people, and the chapel is able to seat 200. It also has an expansive lobby where people can gather before and after the service.

The new Friendship was designed by Bill Chegwidden of CDH Partners and built by Van Winkle Construction and C.D. Moody Construction. Trustee Lloyd S. Hawk, who helped oversee the project, would not disclose the final cost of the new church.

Looking around the new facility, all Hawk would say was: “You can see we spared no expense.” 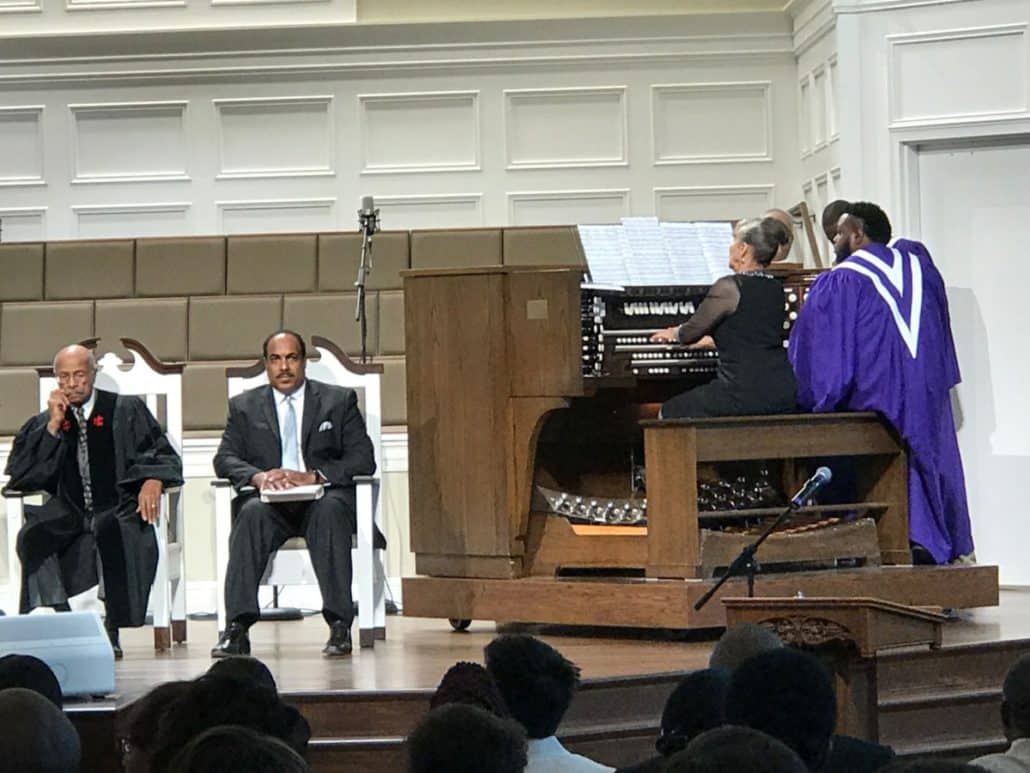 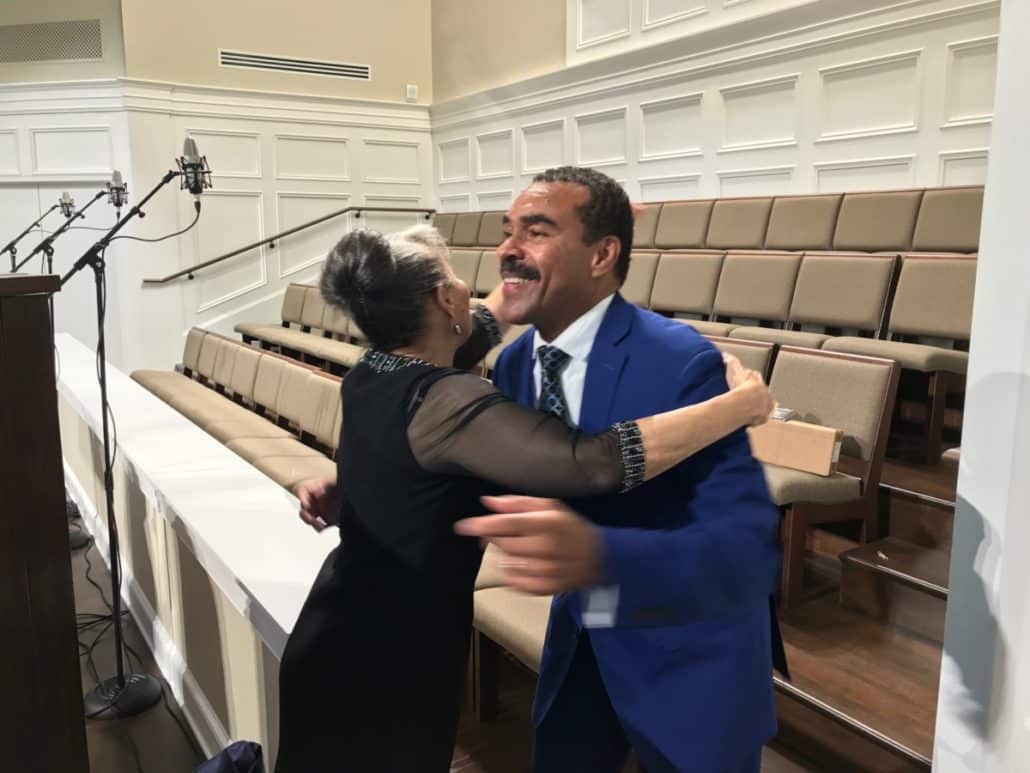 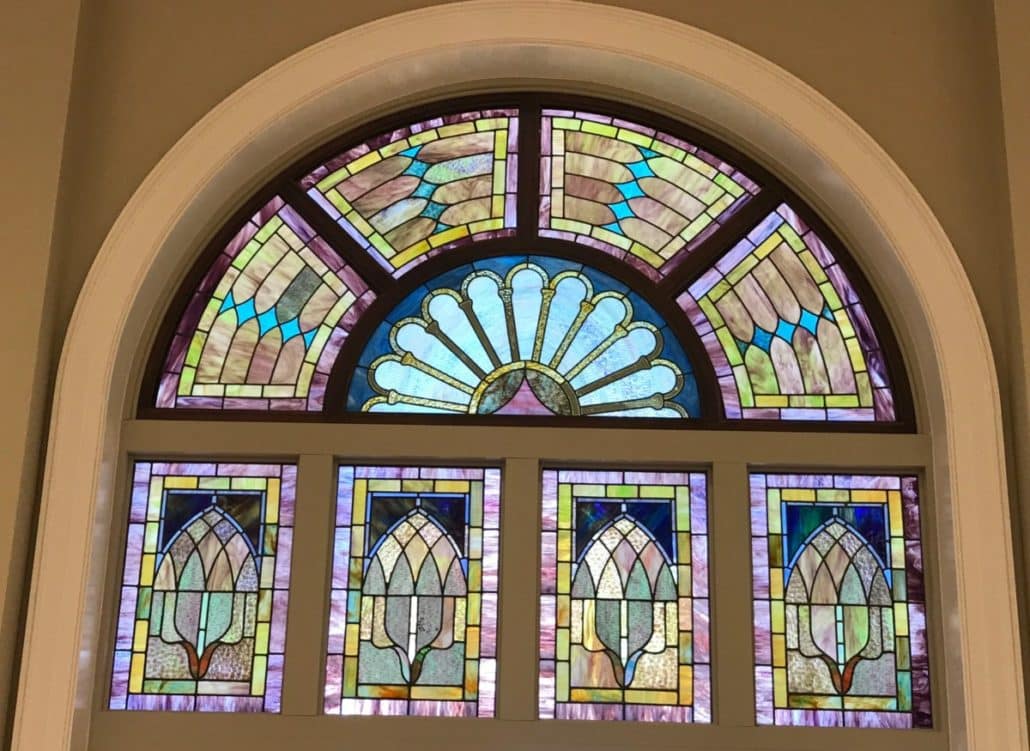 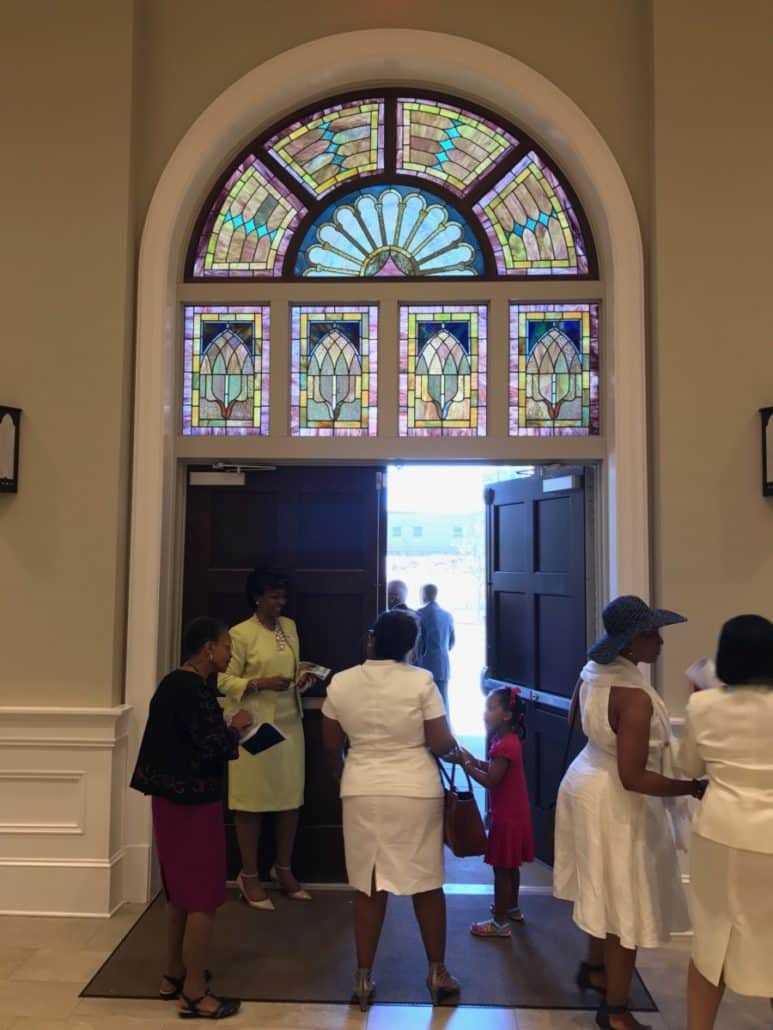 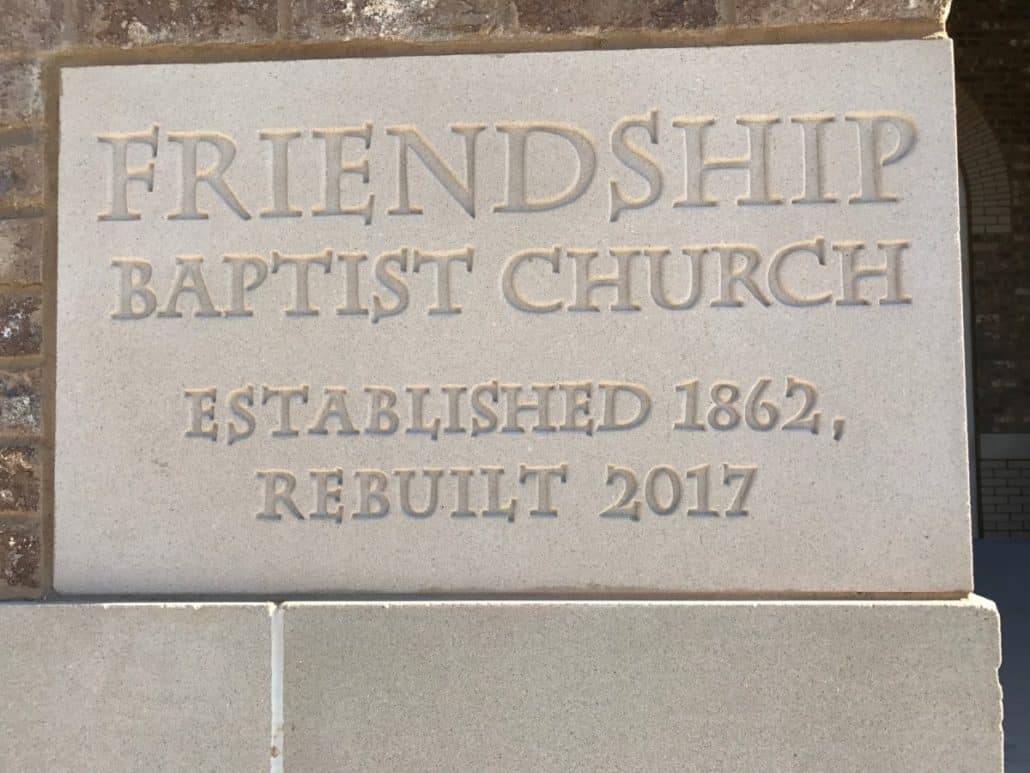