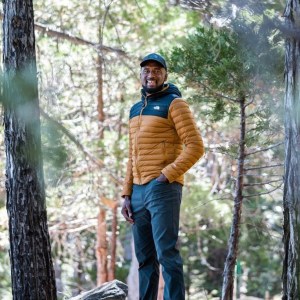 Greening Youth Foundation (GYF), an Atlanta-based environmental nonprofit, recently welcomed a new leader to the helm, with Lesford Duncan joining as CEO. GYF aims to improve outdoor access for underserved youth and young adults and offers programming to connect them to careers in the environmental sector in North America and West Africa.

As an avid nature lover — with an affinity for ultramarathon running, kayaking and climbing — and a background in social service, Duncan sought a role that combined the two. He found that in his most recent role with Outdoor Outreach, serving as associate executive director for the San Diego nonprofit that connects underrepresented youth to the outdoors.

In that role, Duncan learned a “fundamental concept,” which he carries into his new position.

“She was describing a movement,” Duncan said. “A movement to increase diversity in career opportunities in the outdoors, land management and so forth. More importantly, a movement to empower youth and allow them to explore their own leadership styles and identity in the outdoors, especially Black and brown kids. What I also saw was an environmental education organization that was Black-founded, Black-led and there are so few of us across the country. I was really inspired by the work and mission.”

While getting acquainted with his new home, Duncan is looking at ways to leverage Atlanta’s strengths while working on some of its weaknesses. 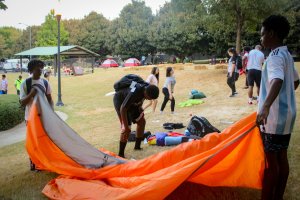 The 2022 Legacy Campout is Sept. 30, for kids ages 11 to 17. During the 2019 Campout, GYF hosted 75 kids to spend the night under the stars while celebrating Martin Luther King Jr.’s legacy and meeting key local figures like the late John Lewis. (Photo courtesy of Greening Youth Foundation.)

“Atlanta is one of the greenest urban centers in America. It’s also one of America’s most vibrant and diverse cities with deep roots and a rich history. There’s such a deep sense of community and interconnectedness amongst organizations in the public and private sector that we’re really grateful to be an integral part of.”

Barriers still exist, however. “There’s a disproportionate use and access to our green spaces, beautiful parks and natural resources here in Atlanta,” Duncan said.

Duncan has been in the new role for less than a month but has his sights set on helping change the face of the environmental field to better reflect local residents and communities.

For example, Duncan is focused on GYF’s HBCU Internship program — offered in partnership with the National Parks Service (NPS) — which helps connect minority students to career opportunities with NPS.

The team will also continue to leverage its role with the Outdoor Foundation’s Thrive Outside Community — led by the West Atlanta Watershed Alliance — which aims to increase access and programming around the Chattahoochee River, along with other greenspace restoration and preservation.

Ultimately, though, Duncan is staying true to the organization’s core mission by engaging younger generations with the outdoors and helping encourage careers in conservation.