New leaders at Morehouse: ‘Time to turn the page’ 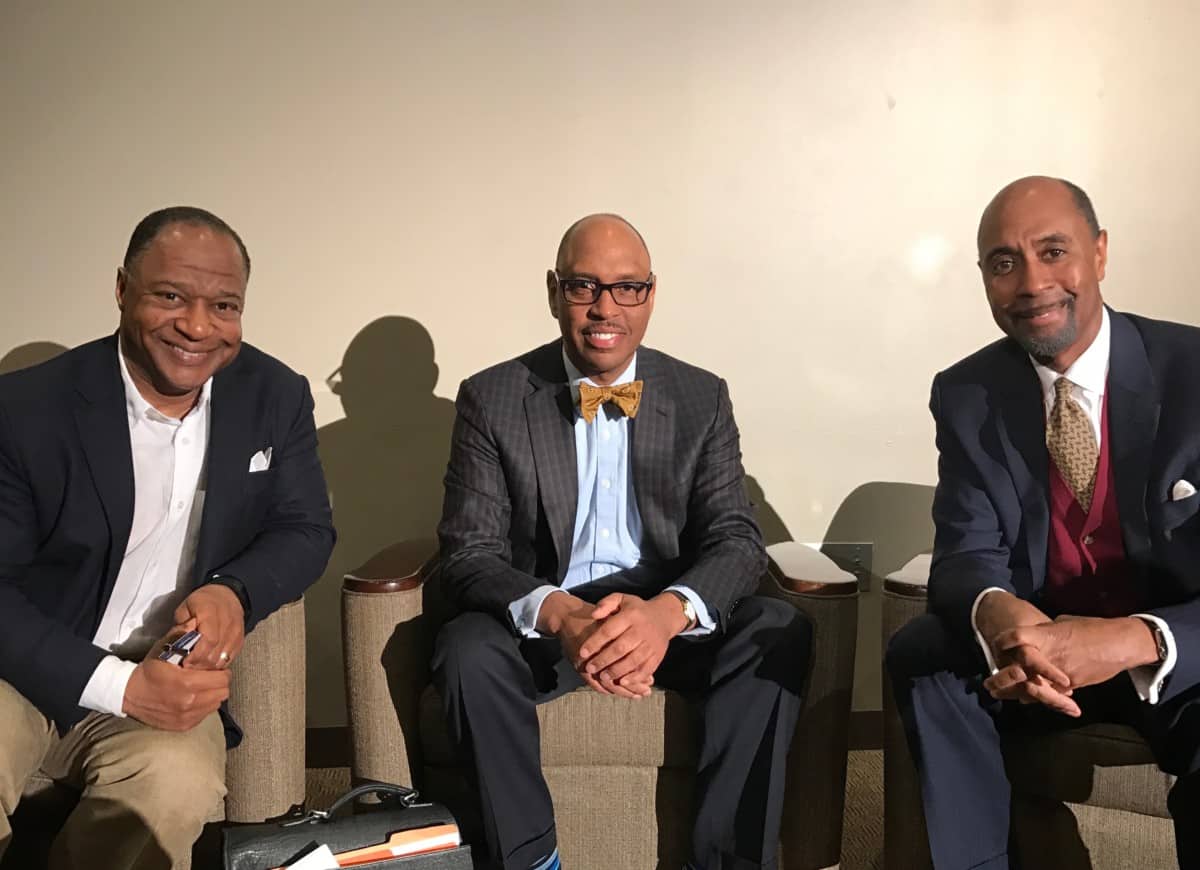 A new leadership team is in place at Morehouse College as its Board of Trustees elected a new board chairman – Willie Woods; and named William “Bill” Taggart as the interim president.

The trustees, who met in Atlanta on Friday and Saturday, made the leadership changes after a host of reports revealed a fractionalized relationship between the board – in particular its Chairman Robert Davidson – and its president for the past four years – John S. Wilson.

“It was time to turn the page and make a leadership change,” Woods said in an interview on Saturday afternoon following the board meeting. “I think we heard the community loud and clear that a full scale change was necessary.” 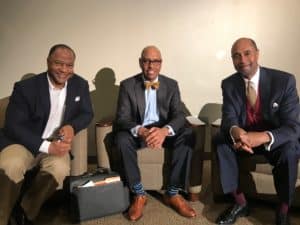 Dale Jones, chair of the Morehouse presidential search; Willie Woods, the new board chairman, and Bill Taggart, who is serving as interim president, sit down for an interview following the Morehouse board meeting (Photo by Maria Saporta)

The rancor of the past several months had extended to the Morehouse student board, which had filed legal action against the board, as well as the College’s faculty, which last month had passed a vote of no confidence in the board.

On Friday, board members met with members of the faculty and students, a move several observers believed should have happened years ago. The new leadership team, which also included a change in every officer on the board, was announced on late Friday afternoon. The other officers elected included: John Thorton as vice chair, Richard Thaler as treasurer, Harold Martin as secretary and Dr. Dorothy Yancy as assistant secretary.

“In transition, you always discover new ideas,” said Woods, who is president and managing director of New York-based ICV Partners. “We are going to discover ourselves.”

The board also is moving forward with a search for the next president of Morehouse.

Dale Jones, a Morehouse alum who is president and CEO of Diversified Search and is chairing the search committee, also was interviewed after the board meeting.

“We have now moved beyond a level of dysfunction to a higher level of collaboration,” Jones said.

The Boston-based search firm of Isaacson Miller has been retained to help Morehouse find its next president.

“We made the commitment there will be no barriers or bias around race, gender and experience,” Jones said. “We really want the best leader for the next season in Morehouse history.”

The past several presidents have been “Morehouse Men” – alumni who attended the well-respected institution, internationally known for graduating such leaders as Martin Luther King Jr., Maynard Jackson, Samuel Jackson, Spike Lee among others.

Jones they would consider people with a demonstrated track record of success, and he did not exclude the possibility that a woman and/or a white person would be considered.

“Because Morehouse is a national treasure, we really wanted to do a national search,” Jones said. “Out of the crisis, there has been a clarion call for unity.”

At the same time, Jones said the board has been reviewing its governance and bylaws for several years, and it should vote on its bylaws change at its October board meeting. 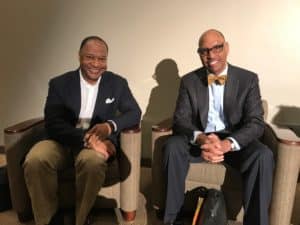 The board’s practices are under scrutiny after a visit this week from the Southern Association of Colleges and Schools, the accrediting agency.

“All the regulators want is transparency and honesty,” Woods said. “That doesn’t worry us because that’s what we plan to do.”

Faculty member Ron Thomas, who serves on the Morehouse board, said it has been well known that there was tension between the former chairman and President Wilson. Until Friday’s meeting, “the faculty didn’t feel they knew their board.”

Taggart said it was important for the change to happen now “especially in the 150th anniversary year.” He hopes to help “enhance the Morehouse brand” and increase the college’s “interaction with the city” of Atlanta.

“I’m sure over 150 years, we have had our ups and downs yet Morehouse grew stronger and more vibrant,” Taggart said.

Johnathon Hill, president of the Student Government Association who also sits on the board and the presidential search committee, said the organization filed legal action when it was not included in board meetings that decided Wilson’s fate in January.

“We were fighting for voice and input. We wanted our input to be valued – the students and the faculty,” said Hill, who was encouraged by the tone of the meetings this past weekend. “This is our new chapter and our own narrative.”

Later Hill said: “It’s important to digest what has just occurred. We have to demonstrate that everything that has happened this weekend wasn’t for show.”

Morehouse has always encouraged its students to be leaders and to challenge the status quo.

“The students are bright, smart, hardworking and opinionated,” Taggart said. “I’d rather have folks who care and who are passionate, even if it causes a little bit of turbulence.”

The turmoil has been at a peak since the January board meeting (the King holiday weekend) when trustees voted to not renew Wilson’s contract past June. The discord within the institution showed no signs of quieting down until June, when Chairman Davidson also was to step down from his post.

The dual decision for both Davidson and Wilson to step down early had become almost inevitable.

“We couldn’t just wait,” Woods said. “We needed to send a message now. The quicker you get to make change, the quicker you can get to raising money and getting rid of uncertainty.”

When asked if he would be interested in the permanent post, Taggart said: “I’m just focused on being the best interim president Morehouse has had in its history.”

Taggart, who is not a Morehouse Man, attended Howard University and Harvard Business School in 1991, just two years before Woods received his MBA from Harvard.

In looking back, Jones said he was sure the transition to new leadership would make Morehouse a healthier institution.

“Morehouse has stood the test of time over 150 years,” Jones said. “We believe we will emerge better and stronger out of this period with greater transparency and accountability.”