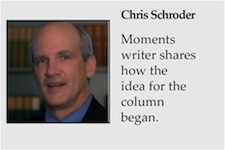 I seem to remember Moments. I can’t tell you the name of the movie I saw last week, but my friends look to me to remind them of scenes from our childhood and high school years. I also remember the day I came up with the idea for this Moments column that we’ve been publishing since last January.

It was on September 7, 2011 – just a few weeks after Maria Saporta asked me to join in the fun and contribute a weekly column to this increasingly popular journey in journalism that we call SaportaReport – that the idea first struck me. I was sitting quietly at a table at On the Border restaurant in Buckhead as my Friday Morning Men’s Fellowship group. My weekly table-mates were discussing the Bible passage in which Saul was struck by lightning – and blinded – while on the road to Damascus.

As I recall in the accompanying one-minute video (which we filmed before we kicked off the series last year), I was listening to the guys at my table discussing how Paul’s life was never the same when he was knocked off his horse when Bob Voyles commented on the life-changing episode when Saul turned into Paul. “Wow,” Bob said. “Paul really had quite a moment!”

I’ve had dozens of Moments since I was a teenager when an new idea strikes me. Some of the ideas have turned out well. Others, well, not so much. As I get older though, I believe I am learning to recognize the better ones. They come with a recognizable charge – almost a vibration of a feeling. My mom would tell me it is the Holy Spirit. Since I’m a recovering Catholic, I give the credit to God.

I’ll probably get around to describing those other Moments in the future – perhaps when we have a gap in the flow of shooting these videos and writing these columns. I liken them to when you purchase a new app. Suddenly, in the time it takes to download a computer application online, the details of an idea will fill in a new part of my brain.

It happened when Bob made his comment that Friday morning. “That’s it,” I said under my breath. “Moments. I’ll ask people in Atlanta about the Moments that have changed their life.” 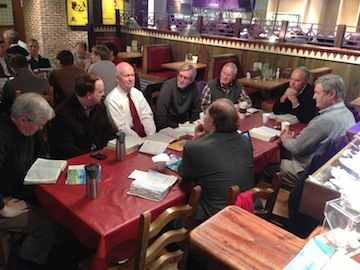 My Friday Morning Men’s Fellowship table at On the Border, which helped inspire Moments.

In the past year, I’ve been amazed that so many metro Atlantans would be willing to invest their time in this effort, allowing us to film their often very personal Moments. From Sam Massell and Arthur Blank recalling when they were suddenly fired from their jobs to Bo Jackson and Brad Cunard reliving those sad Moments then they suddenly lost members of their family to Mayor Kasim Reed revealing the decision that caused him and his dad not to speak for a year.

There were some deeply revealing Moments as well, such as Josh Starks describing those seconds before he nearly jumped off the top of Colony Square, or Charles Driebe discussing his family’s intervention and 22 years of sobriety, or Gary Price talking about how his life as a CEO changed when his wife walked out the door and left him to raise the kids.

There were spiritual Moments as well, from Plemon El-Amin discussing when the Nation of Islam provided more answers to his questions than the Baptist church, or Joyce Fownes, when she was felt as if she was struck by lightning when she was sitting in church and Jesus entered her being for the first time. Unlike Saul, Joyce didn’t need to change her name, but she did change her approach to life and to others.

Beginning next week, we’ll return with another year of more fascinating Moments. From a father whose 12-year-old son dropped dead on the basketball court just a few weeks ago to a CEO who started one of the larger professional service firms in Atlanta when he took a minister’s sermon to heart.

See you next week. Thanks for reading … and watching.