Growing up, New Year’s was always the pinnacle for our family during the holidays.

So, from an early age, the holiday we really celebrated was New Year’s. 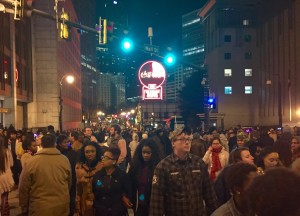 People take over Peachtree Street during the 2015-2016 Peach Drop at Underground with the replica Coca-Cola sign in the background. (Photo by Amy Wenk.)

My parents, my sister Elena and I would welcome the new year by going downtown to stand in front of the dazzling neon Coca-Cola sign that brightened up Margaret Mitchell Square. There would be hundreds — no, thousands — of people at Atlanta’s version of New York’s Times Square. When the digital clock struck midnight, we would be cheering and hugging each other as well as strangers to welcome the new year.

On New Year’s Day, we would go to our neighbors’ house – Dick Munroe and Luis Maza – who would cook collard greens and black-eyed peas for their eclectic group of friends – instilling in us the tradition that eating Southern fare on New Year’s Day would bring us good luck and fortune for the coming year. 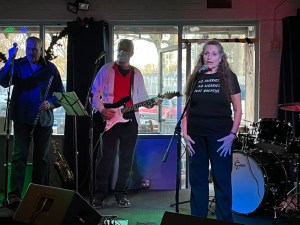 New Year’s Day 2023: Maria remembers Tom Gray, a friend and talented musician, who passed away in 2021. (Photo by Matthew Rao.)

So, in 1992, Jonny and I combined forces to jointly host a New Year’s Day party – first at his Morningside home and then in later years at my home in Midtown. Jonny and the Hibbert brothers – Henry and David – invited their musician friends, and I invited my musician friends – namely Tom Gray and Larry Marcinko – to join in the annual musical adventure.

Eventually, the party outgrew my house. We were nomads going from place to place for a few years until we landed at the Tin Roof Cantina on Briarcliff Road on Jan. 1, 2017. We’ve been there ever since, even though the party was on hiatus for two years because of COVID.

It felt so good to be able to resume our tradition of superstitious Southern fare with fabulous music back at Tin Roof, thanks to the hospitality of owner Jack Hudnall.

We welcomed a new cooking team this year – Eric Weiland and his wife Kristen – who own the Dinner Shoppe on Clairmont Road. (Shané Gruezo Cook, who had been cooking everything for the party for about 15 years, has moved to Florida and couldn’t be with us this year). 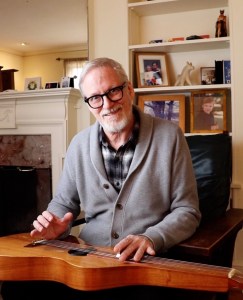 Tom Gray was a master at playing on a lap steel guitar. (Special: Janet Gray)

But that is life – people come and go – and hopefully they come back in our lives as the years go by.

The changing of the calendar year always provides a perfect time to take stock on life – to reflect on the past and the people we’ve lost – while looking to the future with an opportunity to start anew.

We lost Tom Gray, who rarely missed one of our New Year’s Day parties, on Oct. 17, 2021, of cancer.  I have known Tom since I was 14 because we belonged to the same group of friends – many of whom were famed musicians in Atlanta’s new wave music scene.

Tom was the founder of “The Brains,” and he wrote the song “Money Changes Everything,” which Cyndi Lauper turned into a hit. Tom also played with the band “Delta Moon,” for many years.

We paid tribute to Tom during Sunday’s party — complete with a slide shown on a loop — and Larry Marcinko sang “Money Changes Everything.” Jonny Hibbert also played an instrumental that he wrote to honor Tom Gray. 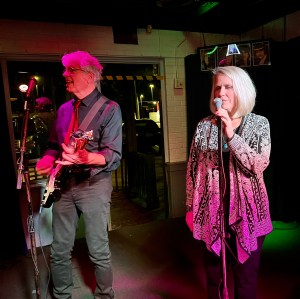 I was so glad that Janet Gray, his widow, could join us.

We also honored John Wyeth Dale, another party regular over many years, who died last year. Jane Jaskevich – John’s partner for 23 years – happened to be in Atlanta, so she was able to join us.

Also in town was my dear friend Connie Mayberry, who sang a couple of tunes, just like the old days. In the 1990s, Connie was my assistant when I was a columnist for the Atlanta Journal-Constitution. We were known as the dynamic duo. Eventually, she moved to North Carolina, and we lost touch. Although it had been 13 years since we had seen each other, it felt like old times.

I got reacquainted with several other friends from my past in 2022, such as Lynn Saussy — we were single parents together in the 1990s — and Jeanette Ross, who I worked with at the AJC’s Intown Extra in 1981.

That’s the way life goes. People come in and out of your life, and the secret to life is to appreciate special people when you’re with them. 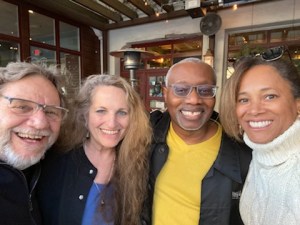 I always miss Mama and Papa around new year’s.

But I am comforted by the fact so many people still remember my parents – such as Bill Bolling, who my parents adopted as the son they never had. Brother Bill, Lyle Harris, Kym Estis and I got together on the Wednesday before the new year when we fondly remembered the now-defunct “First Night” – the incredible New Year’s celebration back in the 1990s put on by the Midtown Alliance, filled with cultural offerings and magnificent fireworks.

More recently, my frequent New Year’s Eve “date” – Stephanie Davis – and I spent several years going to the Peach Drop – walking in the middle of a closed-to-cars Peachtree Street while celebrating the new year with strangers. But Stephanie had other plans with family this year. 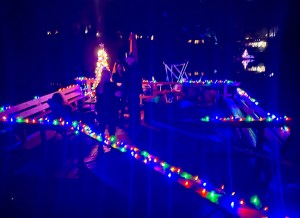 So, my best friend Francie Lasseter and I accepted an invite from a newer dear friend Carolyn Rose-Aviva to join her and her husband (and others) at a New Year’s “progressive dinner” in DeKalb County’s Kenilworth community near Stone Mountain. We went from house to house around Kenilworth Lake for various treats along the way. The setting was a stark contrast to the Peach Drop or First Night experience, but life is all about trying something new and welcoming new people in your life.

In fact, 2022/2023 has been all about blending old friends with new friends – finding ways we can intentionally make our community stronger. An example of that was present on Sunday when both Tom Houck, founder of the Civil Rights Tour of Atlanta, spent time with Jill Savitt, president and CEO of the National Center for Civil and Human Rights. 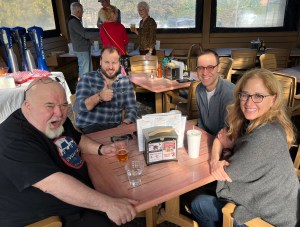 Jill and I were able to go on Tom Houck’s tour on Dec. 18, when we were even more inspired to better preserve Atlanta’s unique civil rights history. We’re planning to host a “preservation tour” with Tom Houck to bring key people together to see how we save our precious past.

Looking forward, I want to spend much of my energy making connections by reweaving our civic fabric. I call it Atlanta Way 2.0, and I will share more about this vision in weeks to come.

Meanwhile, in February, SaportaReport will celebrate its 14th anniversary, which amazes me. We have been fortunate to weather the years and continue to provide relevant stories, columns and features about our metro Atlanta community. Thanks goes to my incredible team as well as our Thought Leaders and corporate sponsors.

And thank you, readers, for continuing to follow us. Together, we can strive to make our community as good as it can be. 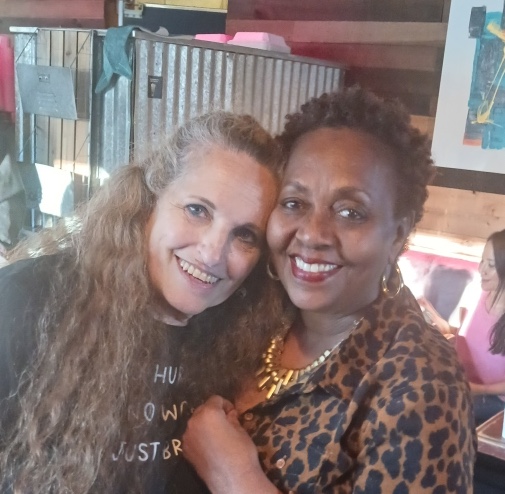 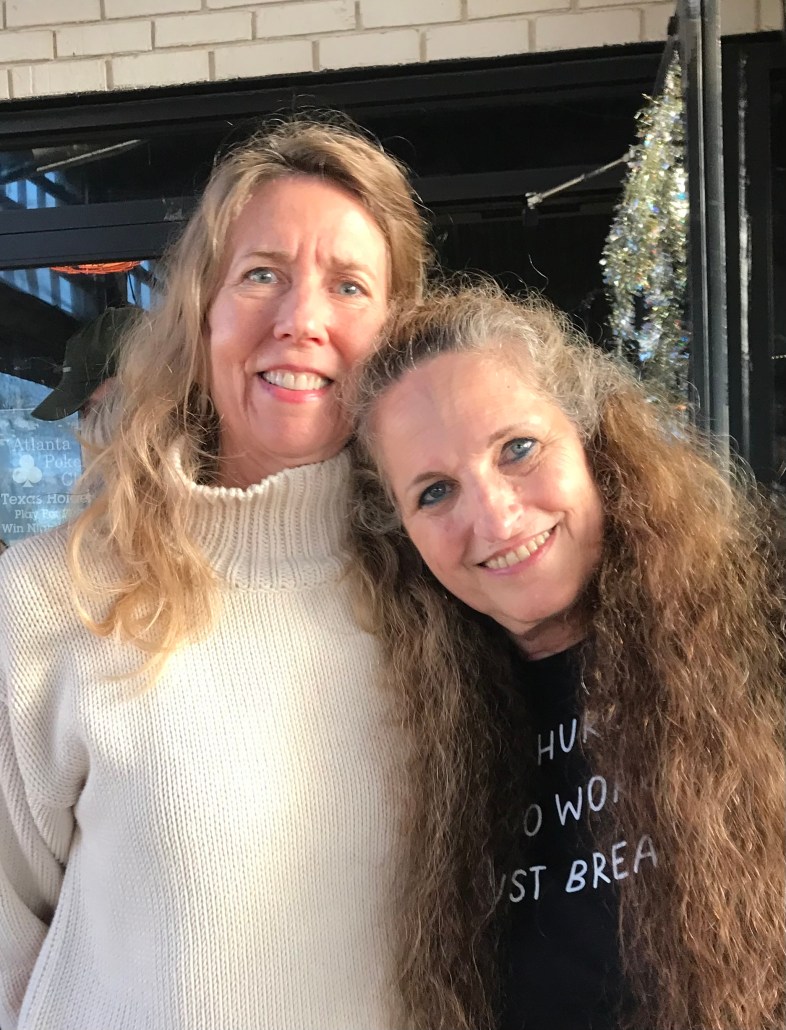 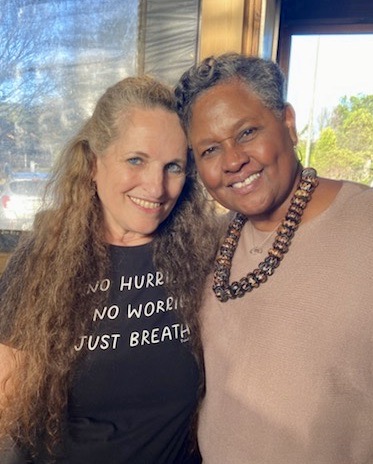 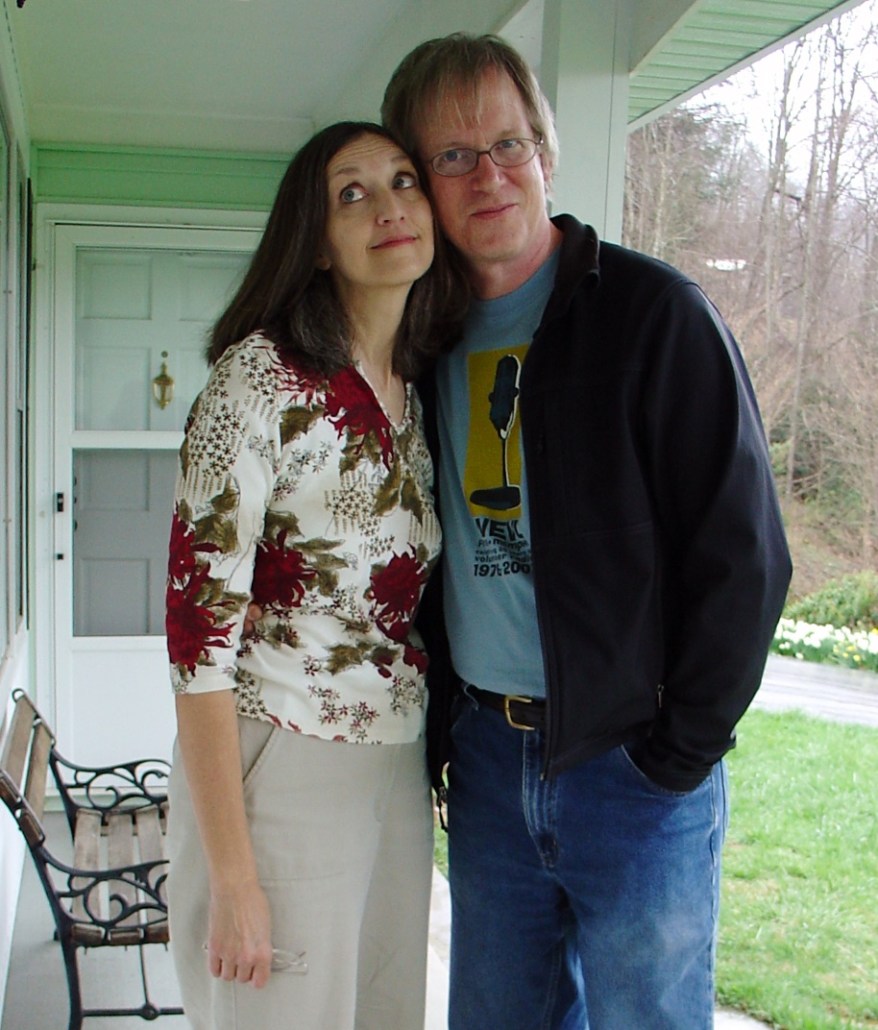 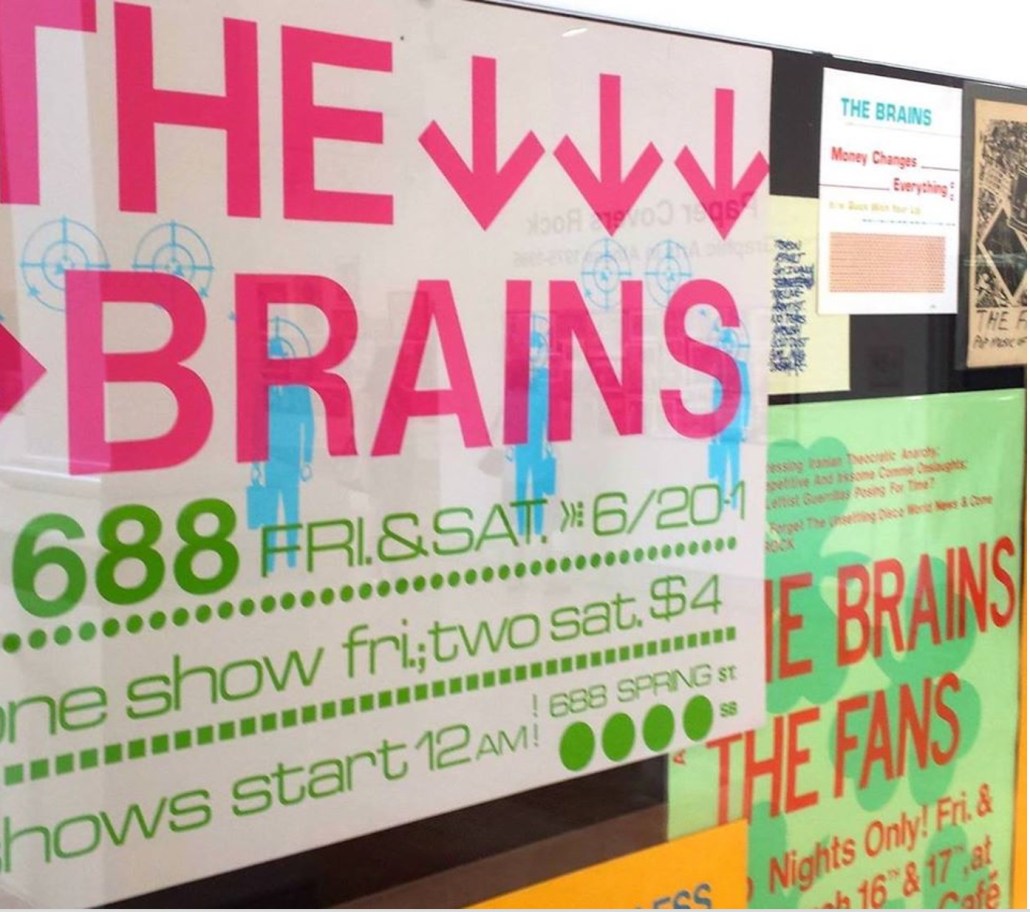 Tom Gray founded the new wave band called “The Brains.” He also was close friends with members of “The Fans,” another significant new wave band from Atlanta. (Special.) 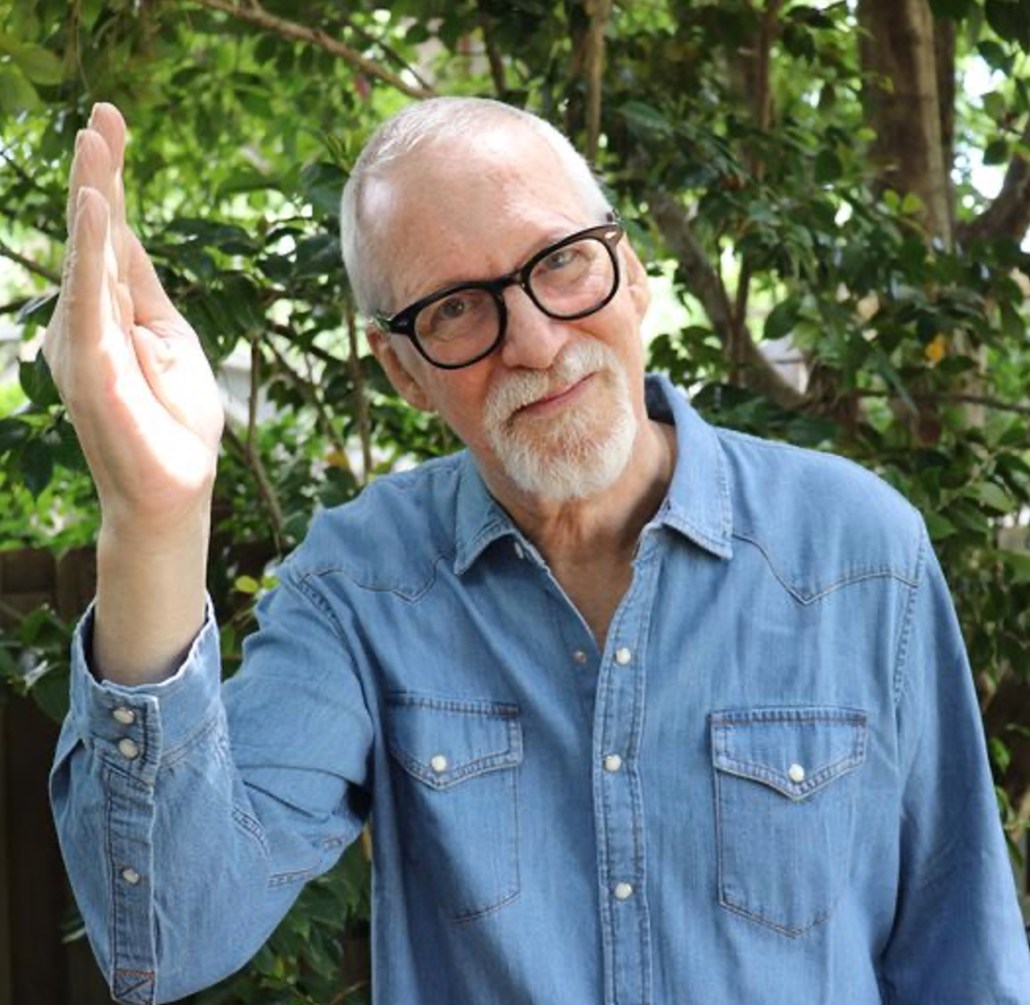 Tom Gray waves goodbye as we remember him with love. (Special.)