Newnan’s Carnegie Library — the reclamation and return of a lost legacy; and a Southern Litfest featuring “bourbon on the porch” 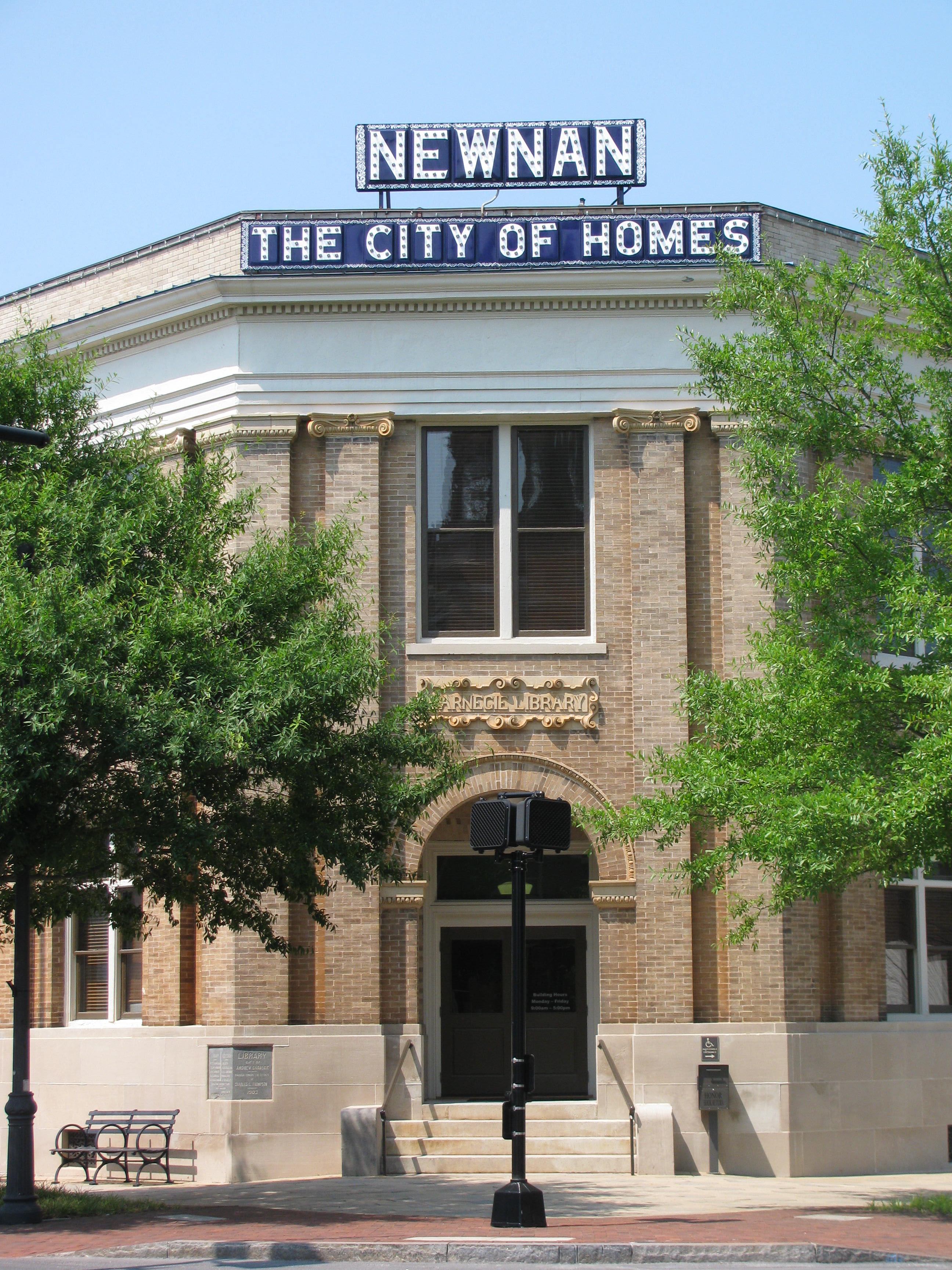 This week guest contributor LAUREN JONES, Newnan Carnegie Library Foundation member, and a Georgia Humanities board member, tells the story of the Carnegie library in Newnan, from its creation to its decline and rebirth.

If a building could have a soul, the Newnan Carnegie Library might be a shining example. The library was built on dreams and determination through an unlikely alliance.

On June 1, 1880, Charles Thompson was born to prominent, educated parents in Newnan. As a child he suffered a fall from a tree while climbing to see if a bird’s nest contained any eggs. Tragically, his injuries resulted in confinement to a “rolling chair” for the rest of his life. Thompson, however, was undeterred, always optimistic and highly motivated despite his frailty. 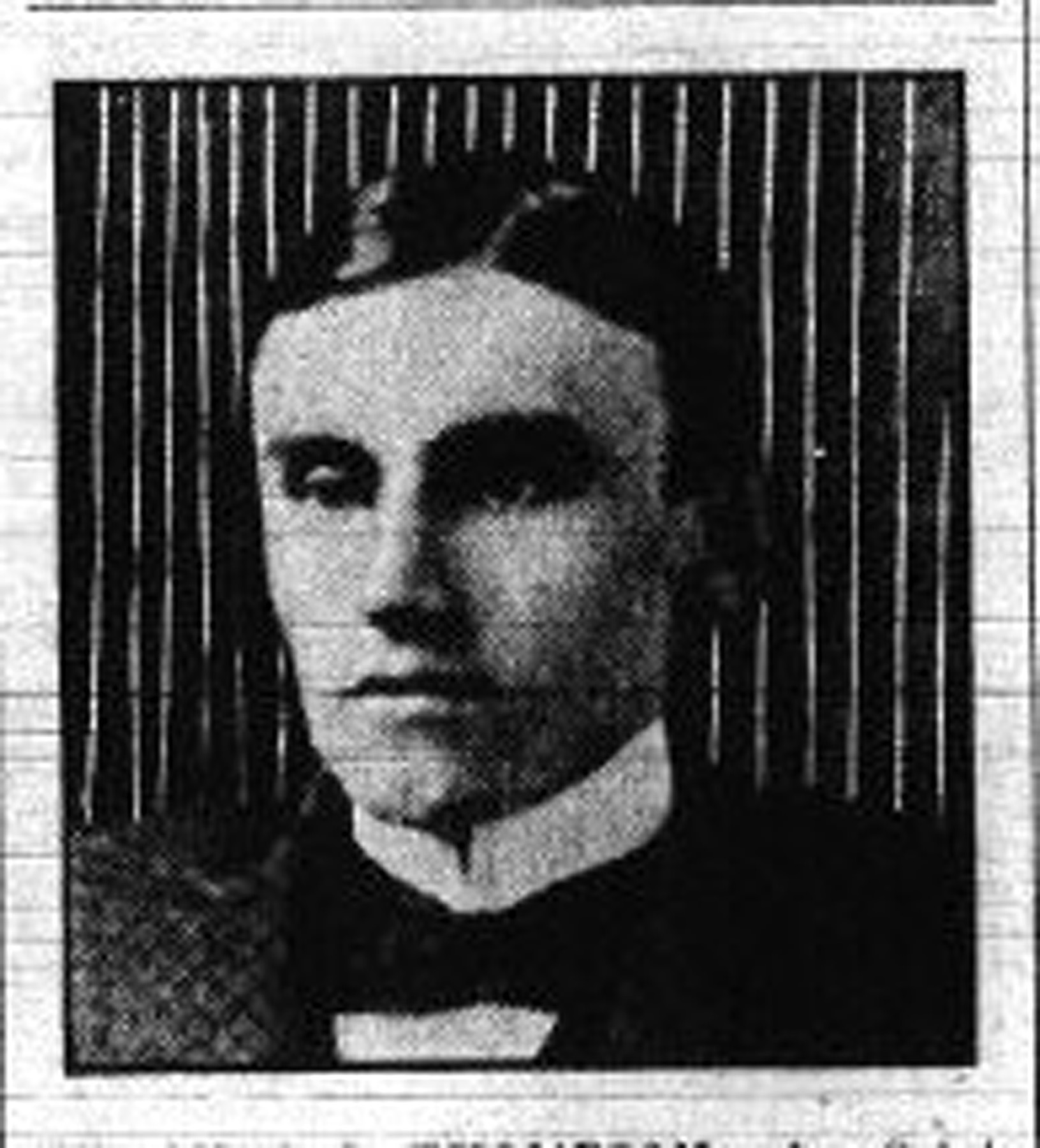 Charles Thompson had a vision for a Carnegie library in Newnan

Prompted perhaps by a visit to the Carnegie library in Atlanta, Thompson wrote an eloquent appeal to businessman and philanthropist Andrew Carnegie — who supported the construction of libraries nationally through grants to towns requesting such funding — to fund a library in Newnan. With the support of the Newnan city council, site location and financing was approved and, with Carnegie’s assent, plans for Georgia’s second Carnegie library were underway. It would, as Carnegie mandated, be centered in town within walking distance of neighborhoods and be matched by the city at 10% yearly of his $10,000 investment. Thompson took the unusual step of insisting an auditorium be situated on the second floor for special events. 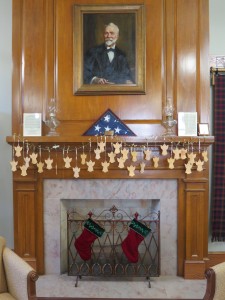 Over the mantel hangs a portrait of Andrew Carnegie, presented by Mrs. Louise Carnegie at the refurbishing of the library in the 1940s.

But Charles Thompson was never to see his dream realized. Shortly after the library plans were approved, he went door-to-door in his rolling chair, conducting a survey on what citizens wanted their library to provide. The cold, wet January weather and his fragile health led to pneumonia. He died on January 30, 1902, at age 21. The local newspaper stated, “The library. . .will stand as a memorial to his public-spiritedness and love for his fellow-man. But those who knew him, those familiar with his kindly voice and cheerful face, will need no memorial to remind them of his virtues.”

His grief-stricken father would spearhead the project to fruition. On August 4, 1903, a cornerstone was laid, and in 1904 the Carnegie opened to a weeklong celebration with speakers and events. 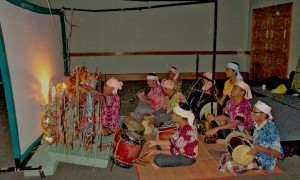 A recent performance in the Carnegie auditorium by Malaysia’s Walang Kulit troupe, in collaboration with the Rialto Theatre for the Arts and Georgia Humanities. Credit: Newnan Times-Herald

Through the generations the Carnegie became the beloved nexus of downtown activity with brimming bookshelves, storytime, after-school homework, plays and programming, teen dances and scout meetings — all the activities that invigorate a community and a downtown.

In the 1980s the Carnegie closed after the construction of a new, larger library on the outskirts of town. Its closing, for many, was an unexpected and unpopular move — the Carnegie was where memories were housed — it was an institution. Sadly, any prospect of its return ended when the county rented the space, converting the structure to a courtroom, offices, and a holding cell for prisoners.

Fortunes changed for the Carnegie in 2007. The county judicial center was completed, and the local government would no longer need to rent the building. A highly focused grassroots coalition, Friends of the Carnegie, immediately formed to bring library services back. The group formulated and circulated a needs survey after soliciting the help of Dr. Shirley Spears, winner of the first National Library Service Award. Enlisting the early backing of Mayor Keith Brady and with survey results in hand, the Friends group garnered unanimous support from the city council. A plan of action was underway barely months after the Carnegie was vacated. 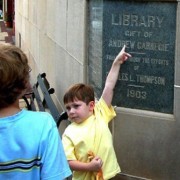 The 1903 cornerstone of the Newnan library

The Carnegie library would return — with its children’s and adult reading rooms, honor books, computers, wi-fi, auditorium, and Mr. Carnegie’s portrait hanging once again over the fireplace. Funded by the General Fund and partly by 2007 SPLOST revenues with a renovation cost of more than $1.5 million to the city of Newnan, the Carnegie library would be uniquely city-owned and would operate on a tight budget. The Friends group reorganized as a 501(c)(3) organization, the Newnan Carnegie Library Foundation, to solicit donors for programming and other initiatives. A more popular city council decision was never made. Celebrating its grand opening in September 2009, the Carnegie library had come full circle back to its original intent. 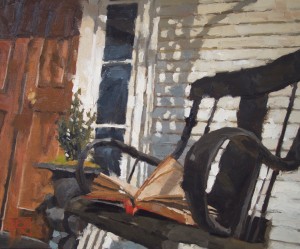 Southern Litfest in Newnan, June 5-6. Painting, The Center of the Universe, by David Boyd Jr.

Today the Carnegie is thriving. Distinguished lecturers visit year-round, and summer brings dozens of programs for children. The exciting installation of D2D (high-definition, real-time interactive video conferencing) has created a bridge to labs and resources at Georgia Tech, to Hawaii’s Aloha telescope, and to compatible systems all over the world and every classroom in Coweta County.

This weekend, June 5-6, the Newnan Carnegie Library Foundation will stage its first Southern Litfest weekend, with a celebration of James Dickey, William Faulkner, small towns, and “all things southern” that would have delighted Charles Thompson.

Through the collaboration of citizens, government, and business, with a bit of entrepreneurship and a large dose of vision, the Newnan Carnegie Library is a true success story about how to make things work. It holds the distinction of being the only Carnegie in the world to have been brought back to library services after conversion to another use, and to retain its original footprint. Today, the library exists as the oldest and possibly most beloved Carnegie in Georgia.

Lauren Jones is a member of the Newnan Carnegie Library Foundation and a board member of Georgia Humanities.

Previous Article
How can we cut the waste in healthcare? To be part of the solution, are we willing to focus on overall wellness and plan our own end-of-life care?
Next Article
Care for a yak filet? Try KSU dining hall, part of school’s sustainable culinary program