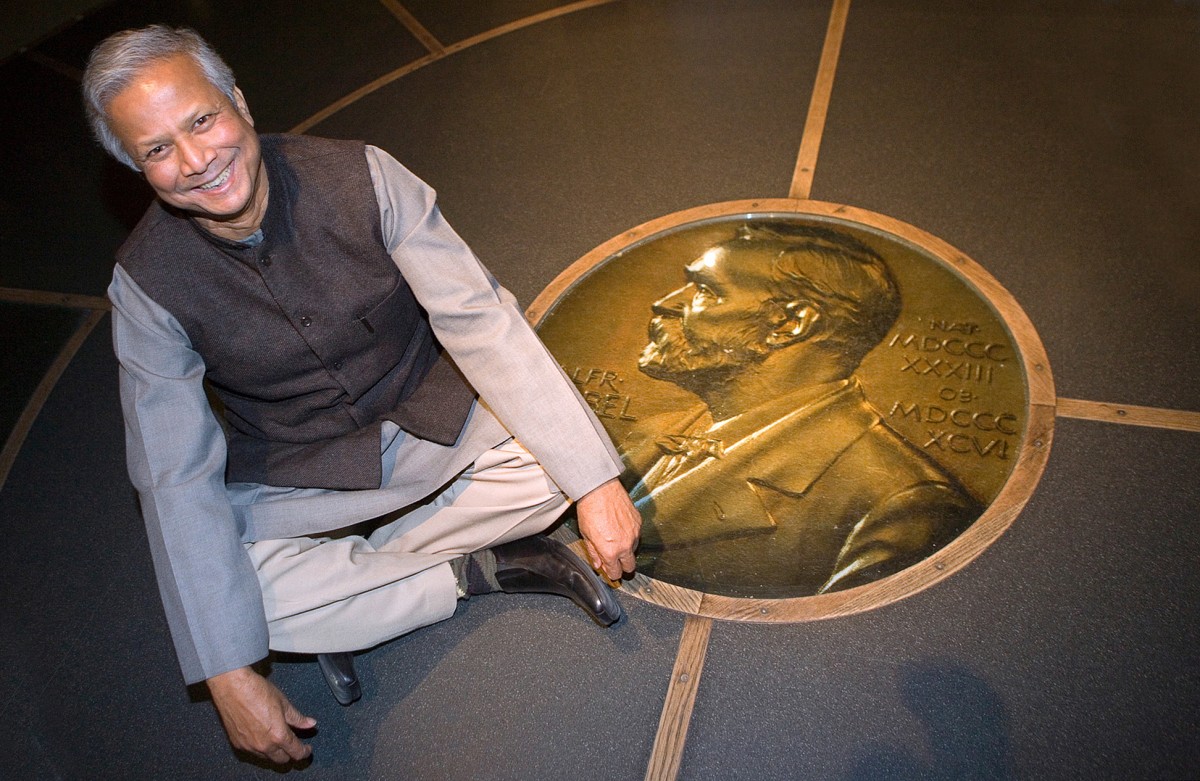 It was his way to kick-off next year’s 2015 Nobel Peace Prize Laureates Summit that will be held in Atlanta from Nov. 15 to Nov. 19 – expected to be the largest gathering of people and organizations of people who have received the Nobel Peace Prize since the founding of the annual summit.

Yunus, who won the Nobel Peace Prize in 2006 for the founding of the micro-lending Grameen Bank in Bangladesh, was instrumental in Atlanta being selected as a host city for the Nobel Peace Laureates Summit. 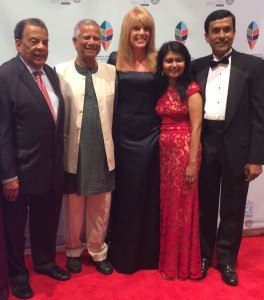 Only Yunus and his team could have had the ability to push politics aside for peace at a Gala Celebration Saturday night at the InterContinental Hotel in Buckhead.

At the Rotary Club of Atlanta luncheon on Monday, Yunus repeated the theme of the Nobel Summit making Atlanta a city better recognized for peace around the world.

A visitor from out of town, would not have realized Saturday night there was a hotly contested gubernatorial race underway in Georgia.

Gov. Nathan Deal, who is running for re-election, sat across the long head table from his Democratic opponent Jason Carter. Although both men were on the official program, politics was not on the menu.

Gov. Deal promised that Georgia would put on “a great show” next November and that people around the world would be coming to discuss the all-important issues of world peace and poverty. Just as Georgia was able to demonstrate in 1996 during the Summer Olympic Games that it could host a world-class event, it would do so again in November, 2015.

When it was Carter’s turn to speak, it was on behalf of his grandfather, former U.S. President Jimmy Carter, who won the Nobel Peace Prize in 2002.

Carter said his grandfather always credited Martin Luther King Jr., who received his Nobel Peace Prize in 1964, for the evolution of the city of Atlanta, Georgia, the South and even Jimmy Carter’s life and platform. 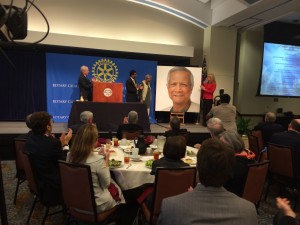 When it was his time to talk at the Gala, Yunus spoke of why he believed Atlanta was an ideal location for the Nobel Summit.

“In my mind, Atlanta is a unique city,” Yunus said. “There is a heritage of peace, a long legacy of peace starting with Martin Luther King, and Ted Turner devoting his life – vowing to stop weapons of mass destruction. Of course there’s President Carter, Andrew Young… This is a tradition. This is your heritage. Why don’t we have a summit where everybody gets involved.”

Yunus said the Summit has the ability to bring the whole state together and to spread a message of non-violence to a new generation.

“We want the whole world to understand, to look at Atlanta,” he said. “It should be a summit of all people – arts and culture, peace activists, media people, young people, people from all over.”

Peace, however, will only happen when the world is able to rid itself of extreme poverty – which is the second half of Yunus’ message. 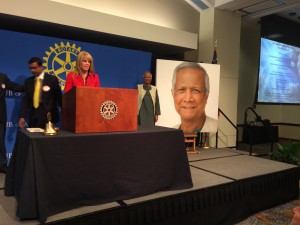 Social businesses are a way to lift people out of poverty and to help people develop businesses that will provide them a livelihood.

During his talk to Rotary, Yunus explained the way that the Grameen Bank had provided microloans to millions of women in Bangladesh, who then became owners of the bank. The proceeds of the bank was reinvested in the community in student loans or other civic ventures.

The idea has grown, and Yunus has broadened his work to include a host of other entrepreneurial ideas, which he refers to as “social businesses.”

“Solve human problems in a business kind of way,” Yunus said. That approach has led to setting up nursing schools and centers to provide cataract surgery throughout Bangladesh. It also has led to business opportunities in Haiti where commercial efforts are underway to reforest the country as well as to support the country producing its own food and fishing operations rather than importing almost everything it has.

“That’s what makes peace – when there is not poverty, when people have access to healthcare,” Yunus said. “Making money is a great happiness. Making the world happy is a super happiness.”

Yunus said he envisions Atlanta hosting a community-wide “March for Peace” event during the Nobel Summit in 2015, and he added that it could become an annual event.

“The whole world will be looking at Atlanta and saying Atlanta means peace,” Yunus said. “Atlanta becomes synonymous with this word.”