Former Atlanta Mayor Maynard Jackson, whose administration created the Neighborhood Planning Unit in 1974, as pictured in the Center for Civic Innovation's presentation on NPU system reforms.

The Center for Civic Innovation’s effort was the first comprehensive review of the nearly half-century-old NPU system, which provides input to City government on virtually any topic, since 1979. The recommendations center on empowering the NPU system with resources, information and coordination. They were praised by many NPU leaders via the chat feature in the virtual announcement meeting, and CCI is urging City officials to formally adopt them by year’s end.

“We know it’s not going to happen overnight,” and will require many partners, said CCI Executive Director Rohit Malhotra. But, he said, the reform would be a great start as the NPU system’s 50th anniversary nears in 2024.

Mayor Maynard Jackson created the NPU system in 1974 especially to get public input on the City’s long-term comprehensive development plan. At that time, many U.S. cities established similar systems of community input councils to democratize government. Today’s system in Atlanta consists of 25 NPUs, each named for a letter of the alphabet, that represent various areas around town, plus an umbrella group called the Atlanta Planning Advisory Board. 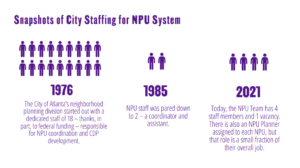 One slide from the CCI’s presentation that caught the attention of NPU members in the Sept. 16 meeting depicted the changing amount of City staffing for the system over the years.

The system remains influential, but concerns have grown about its effectiveness on City decision-making, its accessibility to average residents, and the resources available to operate it. CCI staff mentioned a couple of recent City planning controversies: a draft revision of the comprehensive development plan that many NPUs have criticized for input-free changes, and a public safety training center whose Atlanta Prison Farm site was chosen with no community review.

CCI is a young nonprofit, founded in 2014, that is currently focused on issues of civic engagement and inequity. CCI took it upon itself to conduct the NPU review, which it has said was not commissioned by anyone.

“Our work really started with a quote, that ‘things built for us without us are not for us,’” said Malhotra. And aside from strengthening the system, he said, the work includes an “intention to say, ‘We’ve been bad. There’s a lot of harm that was created.’”

The review included historical research, NPU visits and interviews, focus groups and a community survey that CCI says got about 670 complete responses and more than 1,000 in total. CCI’s full report on the system was not immediately available, with staff instead showing select findings and listing its conclusions about challenges and recommended reforms.

To view the initial presentation, click here. The full meeting video is available on CCI’s Facebook page. CCI set up a webpage about the recommendations, including a form to urge Mayor Keisha Lance Bottoms and the City Council to act.

The gist of the recommendations include: