One of the contaminated soil mounds on the Chattahoochee Brick Co. site that will is being moved to a permitted landfill (Special: Norfolk Southern)
Share
Tweet
Share
Pin
Pocket
WhatsApp
Buffer6
Email
Reddit
6 Shares

Although it has abandoned its plans to build a rail transfer facility on the Chattahoochee Brick Co. in west Atlanta, Norfolk Southern will complete the environmental cleanup of the 75-acre site.

The work will become much more noticeable Monday when Norfolk Southern will start removing 3,500 cubic yards of contaminated soil from the site. 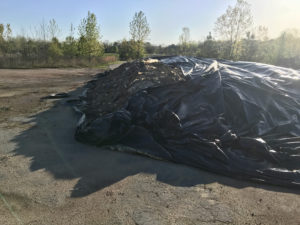 One of the contaminated soil mounds on the Chattahoochee Brick Co. site that will is being moved to a permitted landfill (Special: Norfolk Southern)

“There will be 40 trucks a day taking the soil out and bringing in clean soil,” said John Hatfield, Norfolk Southern’s vice president of corporate communications, in an interview. “We estimate it will take six weeks to remove all the soil and replace it. We are not restarting work on the site.”

But Hatfield said Norfolk Southern, despite dropping its plans to develop the property, wanted to leave the site in better shape than it was when the railroad first got involved with the project.

“We want to end our involvement with the site in a responsible way, so we will complete the planned remediation of the property,” Hatfield said. “Upon completion, we will record an environmental covenant and certify to the Georgia Environmental Protection Division that the site is safe for certain uses, such as industrial operations.”

Hatfield said additional remediation may be necessary for other uses, such as residential development or converting it into a park. The site sits at the northwest corner of the city of Atlanta along the Chattahoochee River and Proctor Creek.

Community leaders have hoped the property would be converted into a memorial that honors the convicted workers who labored and died on the site as well as into a park that would provide Atlanta residents public access to the Chattahoochee River.

“We recognized from the beginning that anyone who would develop that property had a special responsibility,” Hatfield said. “We believe we had a plan that would have returned the site to productive economic use and provide a memorial, a park and a connection to the river. Our view was that the legal arguments were in our favor. But we didn’t want to go through protracted litigation.”

In February, Norfolk Southern walked away from plans to develop the property into a rail transfer facility following community opposition and after Mayor Keisha Lance Bottoms announced the City of Atlanta was filing for a preliminary injunction with the Surface Transportation Board to stop development of a fuel terminal on the site. 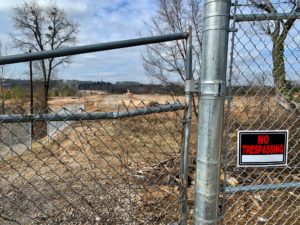 Looking through a chain link fence at the former Chattahoochee Brick Company site in Atlanta, GA. (Photo by Kelly Jordan)

The history of the Chattahoochee Brick Co. in Atlanta has been controversial for decades. The company manufactured millions of bricks by using convict labor – leading to the 2009 book “Slavery by another Name” by Douglas Blackmon.

The land is owned by Lincoln Energy Solutions, which originally wanted to build a fuel terminal on the site. But it was unable to get environmental approvals for the project. It then found another option – to lease the land to Norfolk Southern, which had the ability to develop the property without going through all the regulatory hurdles Lincoln had faced.

Hatfield said that after the six weeks of removing contaminate soil and replacing it with clean soil, Norfolk Southern involvement with the site will be over. He said he is not aware of what the next chapter for the property will be. But it likely will be up to the City of Atlanta and Lincoln Energy to see if there can be an agreement.