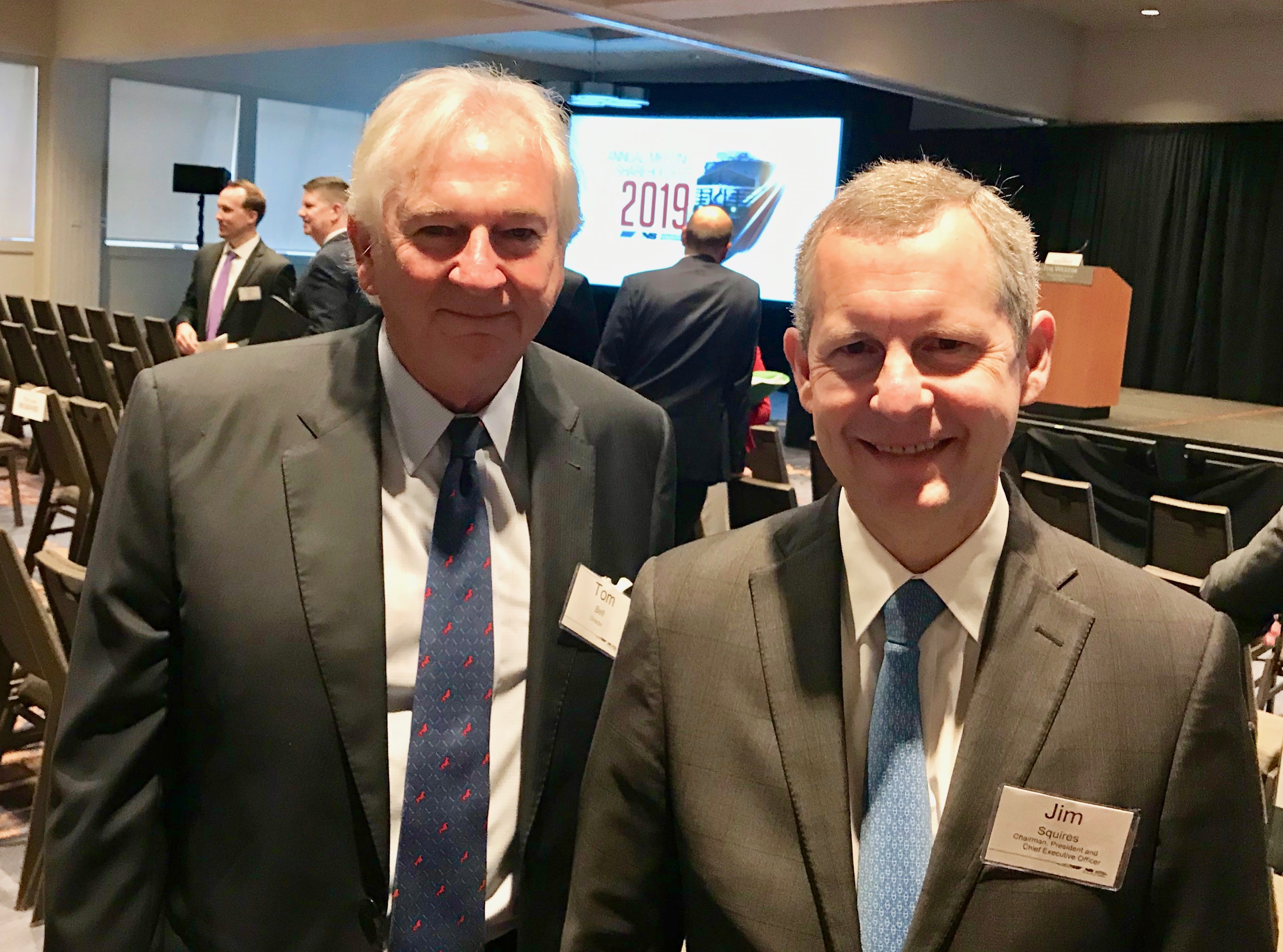 Norfolk Southern Corp. made it clear Thursday morning at its annual shareholders meeting at the Westin Peachtree Plaza – it is now an Atlanta-based company.

“We welcome you to Atlanta,” began Jim Squires, the CEO of the railroad company. “We are delighted so many of you can be here with us today.”

It is the first time in more than 25 years that Norfolk Southern has held its annual meeting in Atlanta. The previous years the company met in Atlanta were in 1991, 1987 and 1984.

The company announced last year that it would be relocating its headquarters from Norfolk, Va. to Atlanta so that it could consolidate its central operations into one location. 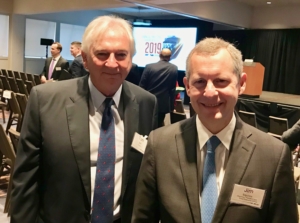 Norfolk Southern holds annual meeting in Atlanta on May 9, 2019. Left to right: Atlanta’s Tom Bell, a director of the railroad since 2010, stands with Jim Squires, the CEO of Norfolk Southern since 2015. Squires has been a director since 2014 (Photo by Maria Saporta)

“As a company that spans 180 years – from the steam age to the digital age – Norfolk Southern is no stranger to change,” Squires told a group of about 30 shareholders present at the Atlanta meeting. When the company had its ground-breaking of the new headquarters in March, he said “people could feel the excitement” surrounding the decision.

The official business of the meeting including the election of 11 directors, including Atlantan Tom Bell, chairman of Mesa Capital Partners and a previous CEO of Cousins Properties.

In addition to ratifying the appointment of KPMG as its independent auditor and approving the advisory resolution on executive compensation, Norfolk Southern shareowners also approved a shareholder proposal urging the company to adopt a “simple majority vote” on all matters rather than having a super majority.

The shareholder proposal, which had been filed by John Chevedden of Redondo Beach, California, said that currently a 1 percent minority can frustrate the will of our 66 percent shareholder majority. “In other words, a 1 percent minority could have the power to prevent shareholders from making an overdue change. This can be particularly important during periods of management underperformance and/or  an economic downturn.”

The company announced that the shareholder proposal had passed despite a board recommendation to oppose it. When asked by what percentage it passed, company officials said the final result would be made public in a few days.

Meanwhile, Squires made an upbeat presentation on the financial and operational status of the railroad. The company is implementing its second three-year strategic plan since Squires became CEO in 2015.

“We are moving full-speed ahead with new plans for the future,” Squires told shareholders. “In many ways, 2018 became a year of transition for us; 2018 was a year to take stock of our achievements and adopt a new strategic plan.”

That plan was “rolled out” in February, and the corporate headquarter move will help in its implementation.

“For the first time, our executive team will be together in one place – in a world-class transportation hub here in Atlanta,” Squires told shareholders.

Only two shareholders asked questions after Squires’ presentation. One of them –Jimmy Ku – asked about the headquarters move to Atlanta.

As a retired IBM employee, Ku said he was glad Norfolk Southern was moving to Atlanta.

“I have been here since 1975, and I’ve watched how Atlanta has grown,” Ku told Squires and the rest of the board. “I believe Georgia Tech is going to become the Silicon Valley of the South…. I’m so glad all your management will be under one roof. But Atlanta’s traffic keeps getting worse and worse. What are your two or three main challenges?”

Squires responded by saying: “We are certainly well aware of the traffic challenges in Midtown. We have 2,000 employees already working in Midtown. We are trying to assist our employees with transportation.”

Squires went on to say that the headquarters location is directly across the street from the Midtown North Avenue Station, which will be convenient for those using transit. The company also will be providing onsite parking, and it will have a dedicated space for ride-sharing vehicles.

“We are well aware of the commuting challenges here in Atlanta,” said Squires, but he said the new headquarters between West Peachtree, Spring streets and 3rdStreet actually has better access to the interstate than the company’s current Atlanta base on Peachtree Street between 14thand 15thstreets.

In a brief interview after the meeting, Squires said he would be moving to Atlanta sometime this summer.

“We are delighted,” Squires said of the move. “This day has been a long time coming. Things are going extremely well.”

“The project is on track,” said Squires, perhaps unconsciously using a railroad metaphor.

Asked if Norfolk Southern would be holding next year’s annual meeting in Atlanta, Squires said the company has not yet decided.

“We’ve done it different ways,” said Squires, adding that recently the company has been meeting in the southeast Virginia area. “The trend with annual meetings has been to downsize. Some have even gone virtual.”

But Squires said an “in person” annual meeting allows shareholders an opportunity to meet with Norfolk Southern’s executives and directors.