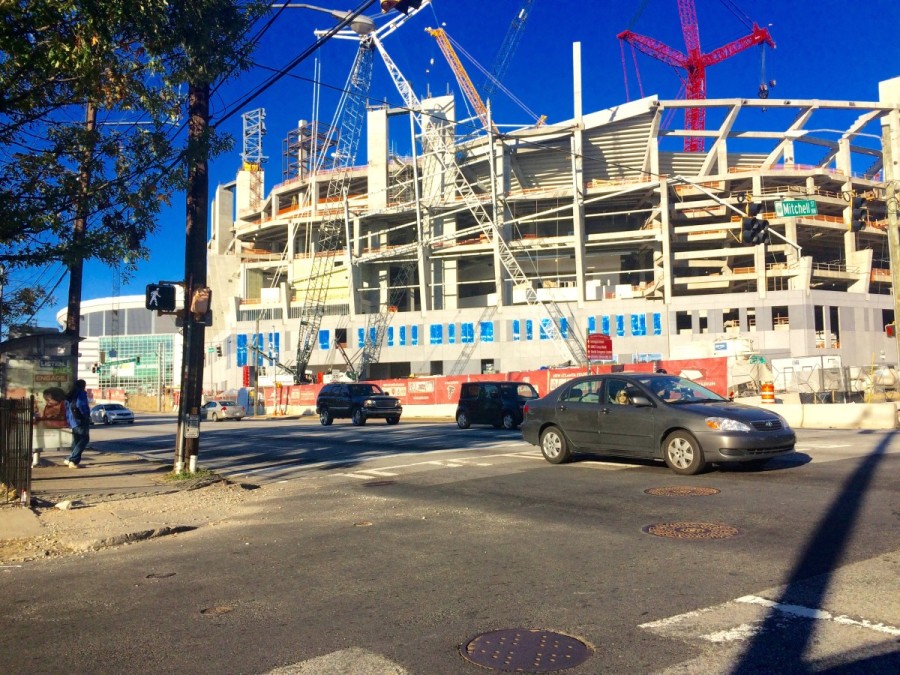 Intersection of Northside Drive and what is now Mitchell Street - slated to become the new Martin Luther King Jr. Drive because of the new stadium (Photo: Maria Saporta)

For decades, Northside Drive has been the great divide separating downtown on the east from the economically-depressed communities on the west side.

Northside has served like a moat – creating a symbolic barrier between the haves and the have nots.

So when a new stadium for the Atlanta Falcons was being planned, neighborhood residents begged for that wall of separation to be recast as a welcoming mat for people on both sides of the street.

The City of Atlanta – working with the Atlanta Falcons – has been working on an elaborate pedestrian bridge that would connect the Vine City MARTA station with the plaza of the new Mercedes-Benz Stadium. 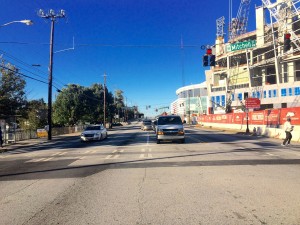 But that begs the question?

Is that the best use of $6 million to $10 million to connect the Westside with Atlanta’s downtown?

(Mayor Kasim Reed has said the city had set aside $6 million for a barebones bridge, but he added that he was willing to invest more on the bridge to make it a world-class amenity in keeping with the new stadium).

A few points to consider. Discussion is underway to only open the bridge when there are events at the stadium for security reasons. Also, the amount of patronage using the Vine City MARTA Station is modest to say the least – bringing into question whether it is even needed during major events.

Lastly, there is the eternal debate for urban areas. Pedestrian bridges remove people from the street – creating an environment that is less inviting to the human-scale city we say we are trying to design. 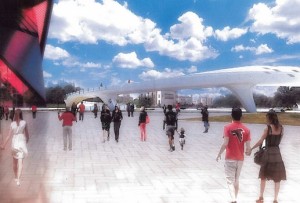 In numerous conversations with people in the community, there is one point of consensus.

Today, Northside Drive is anything but a friendly street to people on foot. As a state road, the Georgia Department of Transportation has to be a willing partner in changing the design of the street.

And there is a growing rallying cry to make Northside Drive a “complete street” – one that is welcoming to pedestrians and cyclists by having wide sidewalks with attractive streetscapes, a landscaped median, bike lanes and well-designated crosswalks with bold, white painted lines clearly showing cars the safe zone for people on foot.

Joe Hudson is a member of Central United Methodist Church, which sits in the bulls-eye of this discussion between Mitchell Street and Martin Luther King Jr. Drive along Northside Drive. 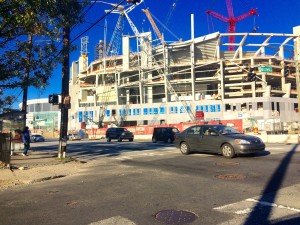 Intersection of Northside Drive and what is now Mitchell Street – slated to become the new Martin Luther King Jr. Drive because of the new stadium. Not a welcoming spot for pedestrians. (Photo: Maria Saporta)

“The whole idea of west side planning and redesign – including the streets and roads – should be to integrate the community value into all plans and recognize the importance of the unique surrounding community,” said Hudson, who is chair of the economic development committee of the Atlanta branch NAACP and a long-time advocate for black-owned businesses.

As it relates to Northside Drive, Hudson put forth his recommendations:

Hudson said the whole streetscape should be “softened” and open to “invite people into the community” rather than being “unwelcoming” to visitors, and he’s suggesting that plazas be incorporated with the design as a way to involve smaller businesses.

“The corner at MLK in particular should have some statement reflecting the importance and history of the community and invitational – welcoming to visit the community and recognize its history and potential,” Hudson said. 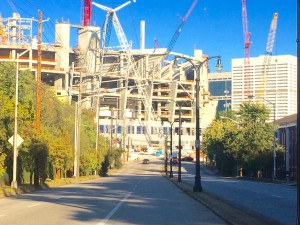 The existing Martin Luther King Jr. Drive is no longer a through street connecting to downtown. This part of the street will be turned into a virtual dead-end when the new stadium opens. Could it become a pedestrian plaza? (Photo by Maria Saporta)

Yvonne Jones, chair of NPU-L – which includes Vine City and English Avenue, said she wished the community had been invited to be part of the conversation. The city has not presented the concept or the plans of a pedestrian bridge over Northside Drive to the NPU.

Jones, who was attending the ground-breaking of Friendship Baptist Church on Sunday, said she hopes the community is invited to participate in the redesign of Northside Drive.

“Just make Northside Drive an asset so people will want to be there,” Jones said. “I’m in support of quieting down Northside Drive. We definitely need better pedestrian crosswalks. It needs to be accessible to walking and biking. There needs to be much more walkability.”

She also said the street must be designed in a way that invites diverse businesses to the area, including retail that serves the community.

Lloyd Hawk, chairman of the board of trustees for Friendship Baptist Church, said Georgia DOT should make sure Northside Drive is pedestrian-friendly and reflects the quality investment of the stadium and the prospective revitalization of the Westside. 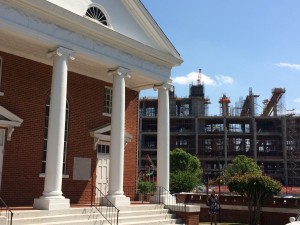 Hawk also supported the idea of wider sidewalks and a landscaped median that would make it easier for pedestrians crossing the street. A model could be the “complete street” design of Peachtree Road between Piedmont Avenue and Lenox Road in Buckhead.

“Martin Luther King Jr. Drive also needs to have that same character,” Hawk said – referring to both the existing MLK and Mitchell Street, which will become the new MLK for several blocks. A pedestrian plaza with limited automobile access along the legacy MLK could become a wonderful gateway between the Westside and downtown.

Most importantly, Hudson the community wants to be sure that “everything that is done is…reflective of the value that is placed upon our community as an important part of Atlanta.”

If the city, which has been considering a “Design Manual for Active, Balanced and Complete Streets,” is serious about reknitting the community with the monolithic structures of the Georgia World Congress Center and the Mercedes-Benz Stadium, it must begin by humanizing Northside Drive.

That should be the top priority. And if our city and state leaders say they don’t have the money to make pedestrian improvements along Northside Drive, well I’ve got a pedestrian bridge I can sell them.

In the end, if we have limited dollars, let’s invest them at street level rather by building a pedestrian bridge that rarely will be used. 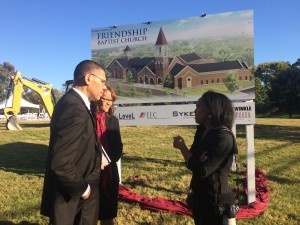 Rev. Dr. Richard W. Wills Sr. and his wife stand in front of a rendering of the new Friendship Baptist Church at the ground-breaking ceremony on Oc.t. 18. It was his first Sunday as Friendship’s seventh pastor in its 153-history. (Photo by Maria Saporta)