The dilapidated home of George Alexander Towns, walking distance from the Mercedes-Benz Stadium, will be restored. (Photo by Kelly Jordan.)

Two dilapidated but historic homes in Atlanta’s Vine City will be preserved thanks to a $1 million grant from the National Park Service (NPS).

The NPS grant will assist in the restoration of two adjacent homes of George Alexander Towns and Grace Towns Hamilton currently owned by Invest Atlanta. The grant will go to Invest Atlanta, the economic development arm of the City of Atlanta and the nonprofit Preserve Black Atlanta. 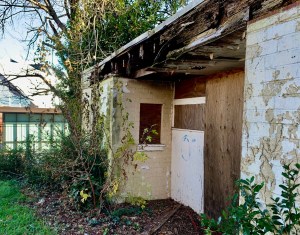 Grace Towns Hamilton built a modern home next door to her parents’ home in 1956. (Photo by Kelly Jordan.)

“Atlanta has a proud legacy of leadership in civil and human rights, and we are truly fortunate to live in a city where we are surrounded by tangible history of movements and their leaders,” Atlanta Mayor Andre Dickens said in a statement. “Thank you to the National Park Service, Preserve Black Atlanta and Invest Atlanta for helping us preserve that legacy for future generations.”

The homes have been vacant and have deteriorated for many years. Invest Atlanta and Preserve Black Atlanta recognized the value of both properties in telling the story of the city’s Civil Rights Movement and preserving community assets, though.

The goal is preserving the historic integrity of the homes as well as activating the properties as community resources and educational spaces. Invest Atlanta will work with Preserve Black Atlanta, which will serve as the project’s Principal Investigator, to oversee the responsibilities associated with managing the grant. 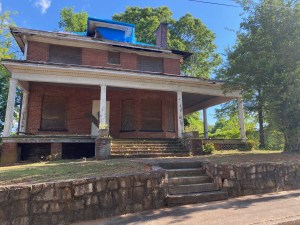 “Historic preservation is proven to be a catalyst for economic development,” said Eloisa Klementich, president and CEO of Invest Atlanta. “Not only does the historic preservation of buildings help to give people a sense of place and connection to the past, but it also drives significant growth in that it helps enhance real estate values and attracts investment and tourism to a community.”

This project is supported through an African American Civil Rights grant, provided by the Historic Preservation Fund, as administered by the National Park Service, a division of the U.S. Department of Interior.

George Alexander Towns built his own home in 1910. As a co-founder of the Niagara Movement and the Atlanta branch of the NAACP, James W. Johnson, W.E.B. Du Bois, and Walter White were frequent guests.

His daughter — Grace Towns Hamilton — completed her home in 1956. She was the executive director of the Atlanta Urban League. In 1966, she was the first African American woman elected to serve in the Georgia House of Representatives. 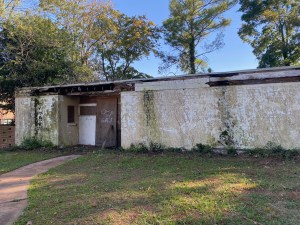 “Located across from the Herndon Home Museum, both Towns’ properties allow the nation to learn about the long organizational history of the Civil Rights Movement,” said Karcheik Sims-Alvarado, CEO of Preserve Black Atlanta. “Both sites remind us of the important contributions of early Civil Rights leaders.”

This years’ NPS awards, totaling $16.25 million will benefit 44 projects in 15 states and support the continued preservation of sites and history related to the African American struggle for equality.