Amid change in Oak Grove, chicken nachos never dip as a Saturday ritual

Note from Michelle: This week’s column is by guest writer Ben Smith.

The deep-dish pizza rose from the north side of the Chicago River.

The best chicken nachos ever can be found at a butcher shop and delicatessen in north suburban Atlanta.

That’s no brag, just fact, according to the regulars who swarm into Oak Grove Market at the corner of LaVista and Oak Grove Roads every Saturday for a plate of the eatery’s number one seller.

More than a taste, the nachos are a tradition that helps keep this small business going in the recession, and gives people a one-of-a-kind experience that they won’t get at a chain restaurant. It’s the same recipe, the same day of the week, at the same place – chicken nachos transformed into a social anchor. 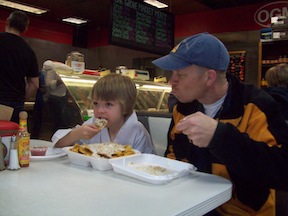 Ethan and Derek Butler got in line early on a recent Saturday for the chicken nachos at Oak Grove Market (Photo: Ben Smith)

“I can’t believe they can pack so much deliciousness in one little chip,” exclaimed a wide-eyed Ethan Butler, 8, just before shoving a tortilla chip loaded with shredded chicken and runny cheese into his mouth. “They’re just too good to be true.”

You don’t have to do anything to coax such hyperbole out of the customers about their favorite dish here. It just gushes out as fast the nachos go in. They’re not pretty — tortilla chips covered in what looks like chicken salad, but taste a little hotter.

Ethan didn’t stop to change out of his green belt and gi after taekwondo practice. He and his father Derek rushed to beat the line that formed behind him shortly after 11 a.m. on a recent Saturday.

The line eventually wrapped three-quarters of the way around the store and put customers in every seat in the place as well as the chairs and tables outside. Almost all of them had ordered chicken nachos. 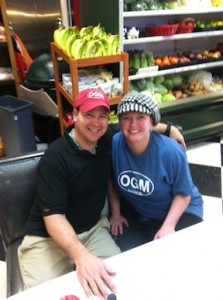 Jeremy and Nicol Turner own and operate the Oak Grove Market, where Saturday chicken nachos help bring the community together (Special photo).

The immense popularity of Oak Grove’s chicken nachos may be attributed as much to the effect of limited supply as it is to the quality of the dish. The lunch plate, which sells for $7.99, is only on the menu on Saturday. It goes on the board at 11 a.m. and comes down when the deli runs out, usually sometime after 3 p.m., according to Oak Grove Market co-owner Jeremy Turner.

Some of the leftover nacho meat mix gets repackaged and sold cold.

“One of our customers uses it to make an award-winning white-chicken chili,” Turner said.

The recipe for Oak Grove’s chicken nachos isn’t a secret. It isn’t hidden in a safe, though its origins may be a mystery.

“Hey Oscar,” Turner shouted at one of the employees behind the counter. “Who made the recipe?”

The two men rattled off a couple of names without settling on one.

“It’s got jalapenos, Mexican spices, with red and yellow peppers in it,” said Turner, describing the recipe as “homemade.”

The “homemade ”description is perhaps relative. Oak Grove doesn’t slaughter the chickens on the premises nor does it milk the cows to make the cheese, but the poultry is locally bought and the melted cheese is blended on site.

“The chicken you eat today was clucking yesterday,” Turner said.

Atlanta is known for tearing down its old stuff and rising anew like the phoenix. The nachos buck that story line. The chicken nachos have been around for seven years and have survived multiple menu changes and more. 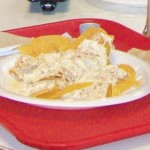 Turner and his co-owners purchased the butchery and delicatessen two and a half years ago. The Saturday chicken nachos tradition came with the sale.

In a previous incarnation, Oak Grove Market was Northeast Meats and located on the other side of Oak Grove Road where a Walgreen’s now stands. At that location, Turner enjoyed chicken nachos for free, and so did his fellow colleagues in law enforcement. Now that he’s retired his badge, he said, he has to work for the nachos.

But it’s worth it to him. Beaks down, chicken nachos are the store’s biggest hit on the menu. Saturdays are the market’s biggest revenue-generating day of the week.

The surrounding neighborhoods have experienced permanent change from infill “McMansions,” school redistricting and heavy traffic. Amid those outside forces, chicken nachos are a constant.

“It’s yummy Saturday for me,” said Amanda Brooks, 52, who comes with her family every Saturday if they are in town. “We even buy the chicken nacho meat and take it home and make chicken enchiladas with it.” 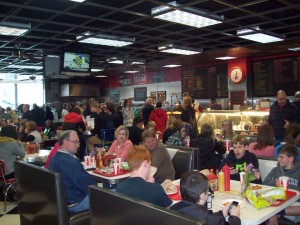 That, and they’re always running into friends and neighbors at the market, said Brooks,   whose 14-year-old daughter Ivy often comes for chicken nachos with members of her club soccer team.

For Beth Shedd, 30, who lives next door to the market, knowing how her food is made, and washing it down with a glass bottle Coke, is the real thing. “You go to a Mexican restaurant, you get taco meat, jalapenos and other crap in there,” she shrugged. “These are better.”

An expert on communities weighed in on that too. Jim Durrett, who lives about a mile and a half away, is a member of the MARTA board and is director of the Buckhead Community Improvement District. On this Saturday, he traveled by bicycle through Tucker, Stone Mountain and Stonecrest Mall in Lithonia — about 55 miles by his count. 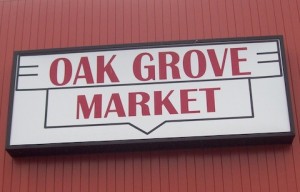 He comes for the chicken nachos as often as some folks get communion at church — about once a month. If his son returns from a college, he comes more often.

For Durrett, the nachos are more than a meal; they’re a shared ritual.

“This is a social gathering place,” he said. “That is what this experience is about.”