The East Lake Foundation has named Lawrence Schall, president of Oglethorpe University, as its new board chair.

Schall , who is succeeding Lillian Giornelli as chair, will join the foundation’s 13-member board, serve a two-year term. Giornelli will continue to serve on the board as vice chair and as head of its fund-raising committee.

Schall said he sees his new role as the foundation’s board chair as an extension of his role as Oglethorpe’s president. Oglethorpe has been one of the partners at Drew Middle School, and Schall has been encouraging the university’s students and faculty to become more involved in the community.”

“Our partnership started in 2007,” Schall said. “A lot of Drew’s students spend time on our campus.”

Schall also has participated with Purpose Built Communities, the organization that has been working to replicate the East Lake model to other communities across the nation. The model promotes a comprehensive approach to neighborhood revitalization — mixed-income residential communities, reinvigorated schools and other community amenities, such as early learning, after-school programs, recreational facilities and new neighborhood retail development.

“One of my goals to help East Lake and Drew be engaged in a broader conversation,” Schall said. Instead of having a concentration of poverty with crime and inadequate schools, the idea is to lift up an entire community by mixing people with different incomes and creating a mixed-income environment. 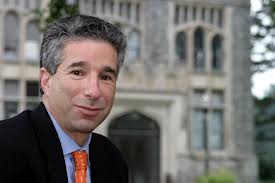 “The unemployment rate in East Lake when Drew Middle School opened was over 80 percent,” Schall said. Today, unemployment in East Lake is below 20 percent. Before the foundation was created in 1995, the crime rate in the East Lake community was 18 times the national average. Today crime has declined tremendously.

The Foundation is able to invest in the community through the annual proceeds of the TOUR Championship by Coca-Cola. That golf tournament is generating about $2.3 million a year for the Foundation.

Also, the Drew Charter School just received approval to establish a high school program so it can bridge its students from middle school to college.

“This is a big time of transition with the opening of the high school, which is really exciting,” Schall said. “We now are touching about 1,000 kids, and it will be about 2,000 when the whole system is up and running.”

Schall was named Oglethorpe’s president in 2005. The university has opened the Center for Civic Engagement, to connect its students to the City of Atlanta and volunteer civic projects.

A native of Wilmington, Delaware, Schall graduated from Swarthmore College and earned his Doctorate of Education from the University of Pennsylvania. He currently serves on the boards of the Council on International Cultural Exchange, the Atlanta Local Education Fund, the Lovett School and Project GRAD.

Other board members of the East Lake Foundation are:

Dr. James Don Edwards, retired J.M. Tull professor of accounting at the Terry College of Business at the University of Georgia;

William Pate, president and CEO of the Atlanta Convention and Visitors Bureau;

Previous Article
Atlanta’s new home loan, refi program available for homes to $374,268
Next Article
Newell Rubbermaid’s reorganization of its top executives leaves women and diversity out in the cold