In 1909, the Olmsted Brothers drafted a Master Plan for the iconic Piedmont Park. Today, the Midtown park sees over six million visitors a year. (Photo by Kelly Jordan)

Activist, maverick and visionary — Those are a few words used to describe Frederick Law Olmsted, the iconic landscape planner. Even if you don’t know him by name, if you’re an Atlantan, you’ve almost certainly visited one of his parks. 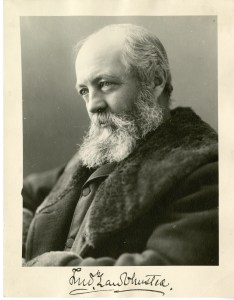 On the bicentennial anniversary of Olmsted’s birth — April 26 — landscape, history and park lovers celebrated the man who helped shape our connection between nature and urban life.

To commemorate the occasion, D.C.-based nonprofit The Cultural Landscape Foundation (TCLF) created a digital guide called “What’s Out There Olmsted,” offering a deep dive into 320 landscapes and over 100 people in Olmsted practice.

Olmsted had a hand in Atlanta classics like Piedmont Park, Grant Park, the Druid Hills Linear Park, and many iconic landmarks nationwide. He was also an outspoken environmentalist and abolitionist.

“[The beauty of the park] should be the beauty of the fields, the meadow, the prairie, of the green pastures, and the still waters. What we want to gain is tranquility and rest to the mind,” Olmsted wrote in 1870, according to the Central Park Conservancy.

Throughout his career of nearly 500 projects — including 100 park designs — Olmsted continued to view outdoor spaces as the antidote to the stress of urban life.

After his death in 1903, his legacy and values were kept alive by The Olmsted Firm, run by his nephew and stepson John Charles and son Frederick “Rick” Law Olmsted, Jr. — coined “The Olmsted Brothers.” The firm was active from 1857 to 1979, completing around 6,000 projects. 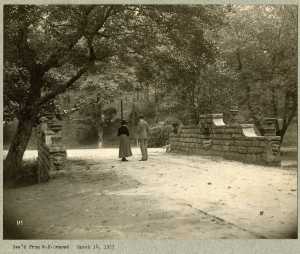 “I find that a lot of placemaking is manufactured,” Birnbaum said. “To Olmsted, placemaking was the genius loci of the place. The place was already there, and what Olmsted was doing was teasing it out and creating a scenographic experience. If the landscape was of some scale, it would reveal itself like a movie, frame by frame. To me, that’s the genius of Olmsted.”

This approach can be seen in the design of Atlanta’s oldest and second-largest parks — Grant Park and Piedmont Park, respectively.

“In Atlanta, there isn’t a tabula rasa, like a clean-the-slate approach to the project work,” he said. “It’s about working in harmony with the natural, the scenic and the historical attributes of a site.”

When planning the Druid Hills neighborhood, Olmsted’s top priorities were preserving the woodlands — like the future Deepdene Park — and the floodplains. He also crafted the Druid Hills Linear Park, the only Atlanta park that Olmsted personally designed.

If it weren’t for the Linear Park, Atlanta landscape architect Spencer Tunnell guesses the neighborhood would be unrecognizable. “If the parks weren’t there, there would be a six-lane highway there now,” he said. “The parks were a central component of stopping the Stone Mountain freeway.”

Tunnell is an Olmsted scholar involved with the Olmsted Linear Park Alliance, a board member for the National Association for Olmsted Parks and the author of “Olmsted’s Linear Park.”  He puts Olmsted on a list with the greats, like Mozart, Michelangelo and Leonardo Da Vinci, adding that part of Olmsted’s genius was his protection of wild spaces.

“Wherever there was sort of a wildland, he tried to put a lasso around it as quickly as he could,” Tunnell said. “To me, the heart of the movement there is, yes, humans are flawed, and our systems are flawed and we do stupid things. But if the parks are there, the Earth is going to forgive a lot of this stuff.”

And Atlantans are lucky that Olmsted prioritized these pockets of green amid an urban landscape — offering a sanctuary for those bogged down by city life. 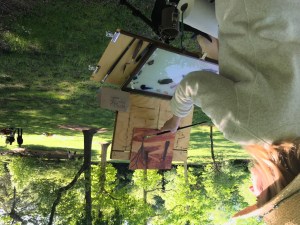 “[Parks are] exactly what we needed during this pandemic,” said Sandra Kruger, executive director of the Olmsted Linear Park Alliance. “If we had not had this park in the last three years, I don’t see us being a collective, collaborative community. If we had not had this incredible, beautiful, historic green resource, we would all be in a very different place right now.”

Birnbaum shared a similar sentiment, adding that city lovers and park enthusiasts should take a moment to thank Olmsted for his dedication to providing public spaces for all.

“There’s much known about his park-making, but there’s so much more Olmsted did to advocate, like the need to protect our waterfronts for public access and not just for industrialization; The need for green lawns and public open space; The need for democratic grounds and open space for all,” he said. “[The firm] literally shaped the fabric of cities.”

If you’re interested in learning more about Olmsted and his lasting legacy, click here to check out TCLF’s digital guide.