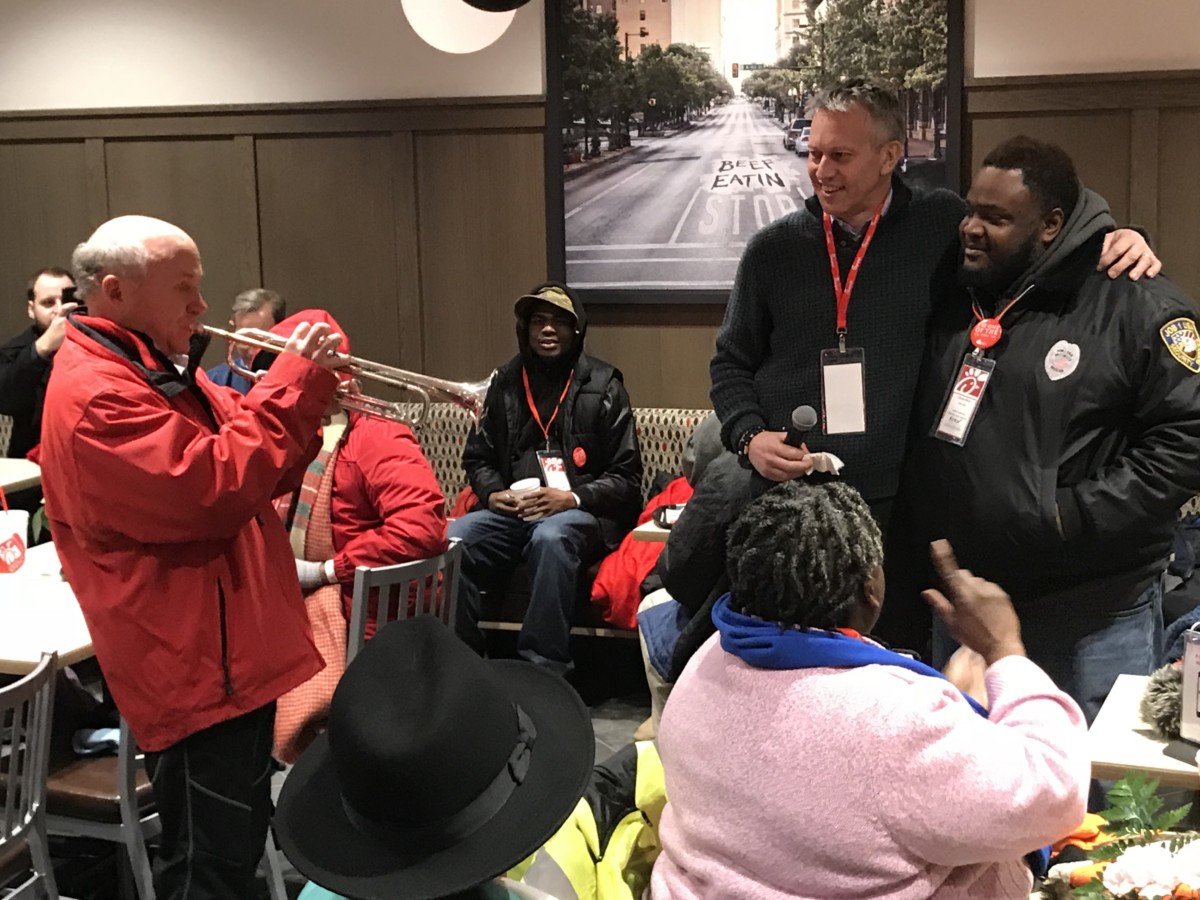 Dan Cathy plays his trumpet while Coca-Cola's James Quincey listens with Alex, who was among those seeking free Chick-fil-A for a year (Photo by Maria Saporta)

The eve before the opening of the new Chick-fil-A restaurant on Martin Luther King Jr. Drive was a night unlike any other in Atlanta’s history.

The “haves” and the “have nots” huddled indoors and ate dinner in the warmth of a new Chick-fil-A restaurant on the Westside of downtown on Wednesday night braving below-freezing temperatures and ice-covered streets. 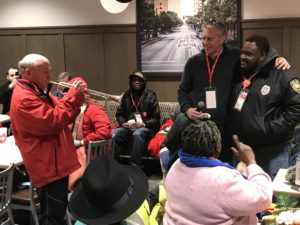 Dan Cathy plays his trumpet while Coca-Cola’s James Quincey listens with Alex Corbin, who was among those seeking free Chick-fil-A for a year. Both were celebrating January birthdays. (Photo by Maria Saporta)

They dined next to dozens of community residents, many of whom were spending the night outdoors so they could be among the 100 people who would win a weekly Chick-fil-A meal for a year.

It has been a long-standing tradition for Chick-fil-A to have a crowd of people spending the night so they can be one of the 100 lucky winners of free sandwiches for a year.

But this time, they were joined in the event with some of the most powerful leaders in Atlanta – many of whom camping outdoors in tents on one of the coldest nights of the year.

It was a true coming together of rich and poor, black and white, men and women, young and old –  gathering at “Main and Main” of Atlanta’s civil rights history – previously known as Hunter and Ashby Street and now Martin Luther King Jr. Dr. and Joseph E. Lowery Boulevard. 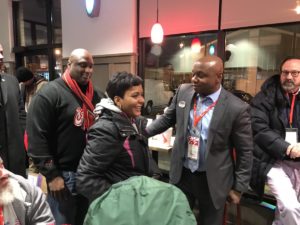 That is the location of the new Chick-fil-A – house that Dan Cathy built and a place that already has come to symbolize so much more than just a new fast-food restaurant.

“I’m particularly excited to be here tonight because of the significance of this location,” said Cathy, who challenged the Atlanta community several years ago to revitalize the Westside. “I can assure you that this location did not come up on our databases that we work on to find site locations for a lot of different reasons.

“But we knew that we needed to be here because of a bigger purpose that we have, which is a reflection of our corporate purpose, which is to glorify God,” Cathy continued.

Even recently-elected Atlanta Mayor Keisha Lance Bottoms came by to join in the celebration.

“My family’s home is just a few blocks from here,” she said. “To see this community really come full circle – it’s really a testament to the belief you have in the Westside. I look forward to spending a lot of time at this Chick-fil-A. Yeah for the Westside!” 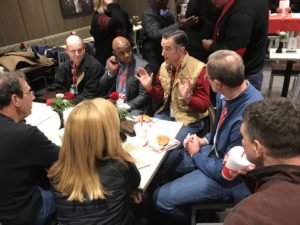 It was the younger Cathy who welcomed Quincy Springs, the franchise owner of the new Chick-fil-A, who formerly worked on the same block as the manager of the adjacent Walmart store.

“We are turning over our name and reputation to you,” he told Springs. “We know we can entrust our name to you.”

Georgia Power’s Paul Bowers told the local residents that he hoped they recognized the dedication that business leaders have towards the community.

“We want for the next generation to have a vision of what can be and have a super impact,” Bowers said. “That’s our passion. This is kind of a celebration night for all of us. We are here for a higher purpose. Our purpose is to serve you.”

After everyone had had a chance to dine of Chick-fil-A sandwiches and break bread with each other, Dan Cathy took the night to the next level.

“I have long recognized how powerful food is to bringing people together,” he said, adding that going back to ancient times, “food would be used to find common ground, to set those differences aside and to recognize our common humanity.”

Before going outdoors to spend the night, the business and civic leaders huddled around to talk about the challenges they face in their quest to lift up the Westside.

Richard Dugas, who chairs the Westside Future Fund, said the goal is to revitalize and repopulate the area without displacing the existing residents. 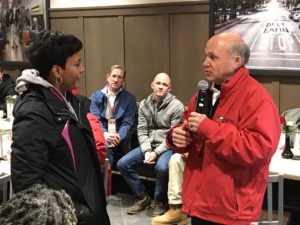 The Fund has established two ways for entities to contribute – an investment fund to help acquire properties in the community and a philanthropic fund to help make sure rents remain affordable for the existing residents.

During the 1960s, the four neighborhoods that are part of the Westside Future Fund had a population of about 50,000 people. Now it’s closer to 15,000 with more than 80 percent people who are renters. Those are the ones who are the most vulnerable to gentrification and displacement.

Liz Blake, retired general counsel for Habitat for Humanity International and on the WFF board, said the situation was urgent because people already were being displaced.

“We have a social contract with the 15,000 people who live here,” said Blake, adding that donations and investments are needed now to make sure people are not pushed out. “We need gobs and gobs of money.”

If Atlanta can get this right, it would become a national model of how to revitalize a community while protecting its residents from being displaced and improving their lives at the same time.

No matter what, it was a night to remember for the millionaires and billionaires spending the night in one of Atlanta’s poorest communities. 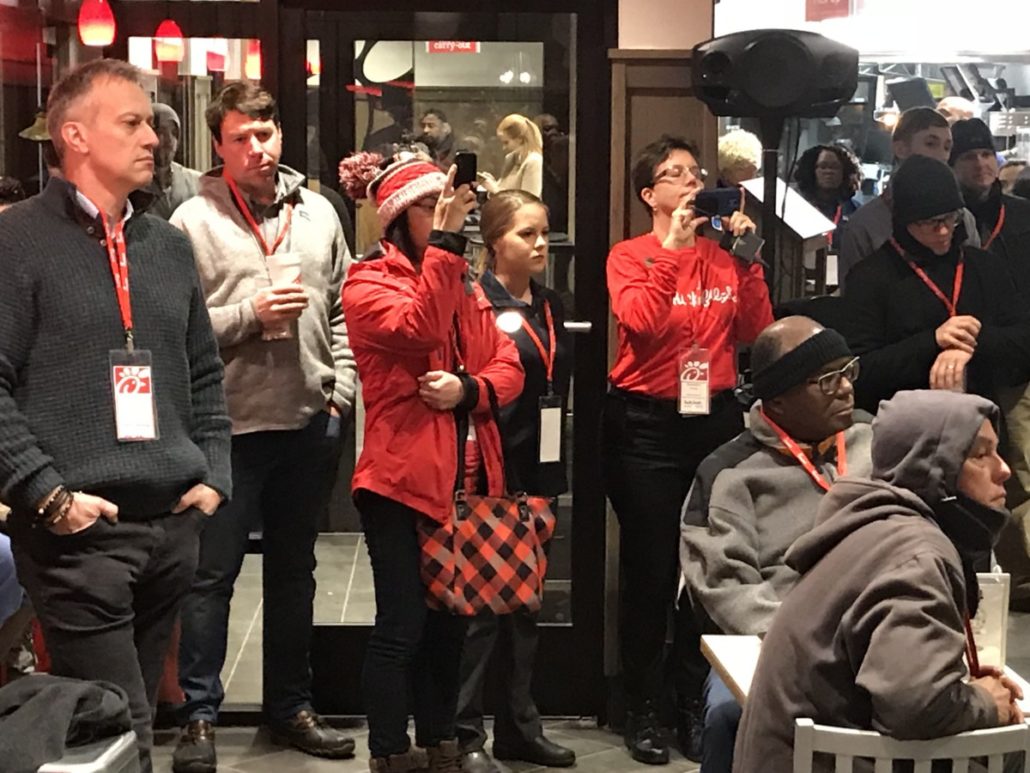 James Quincey, Alex Taylor and others listen to Dan Cathy talk about the opening (Photo by Maria Saporta) 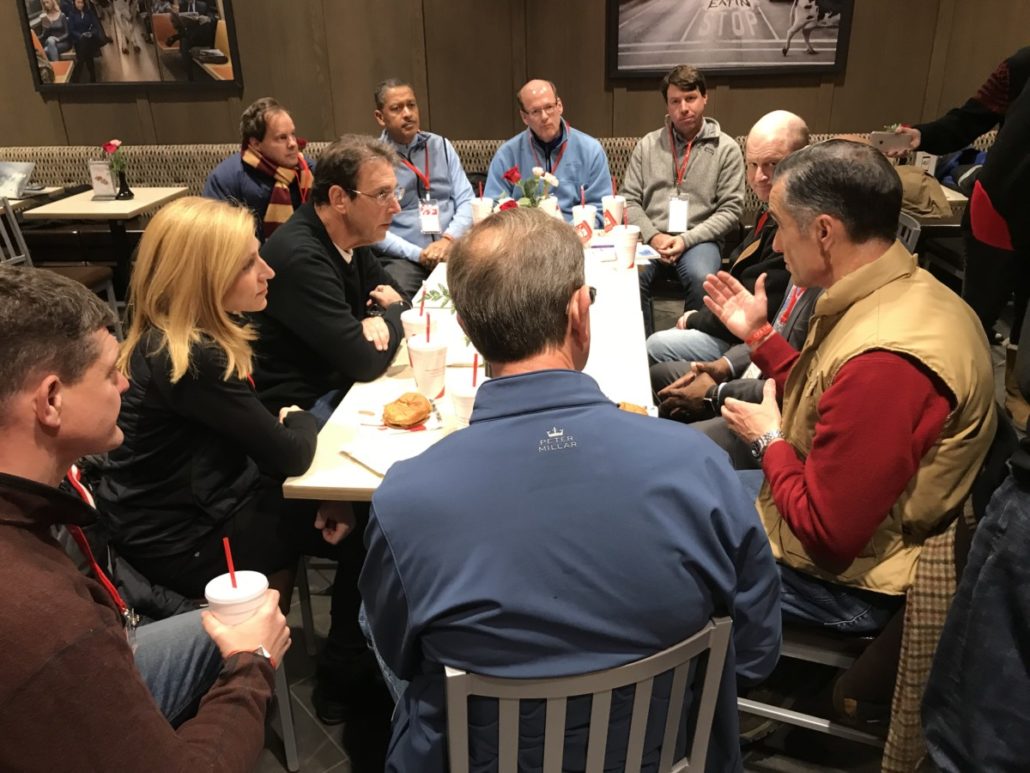 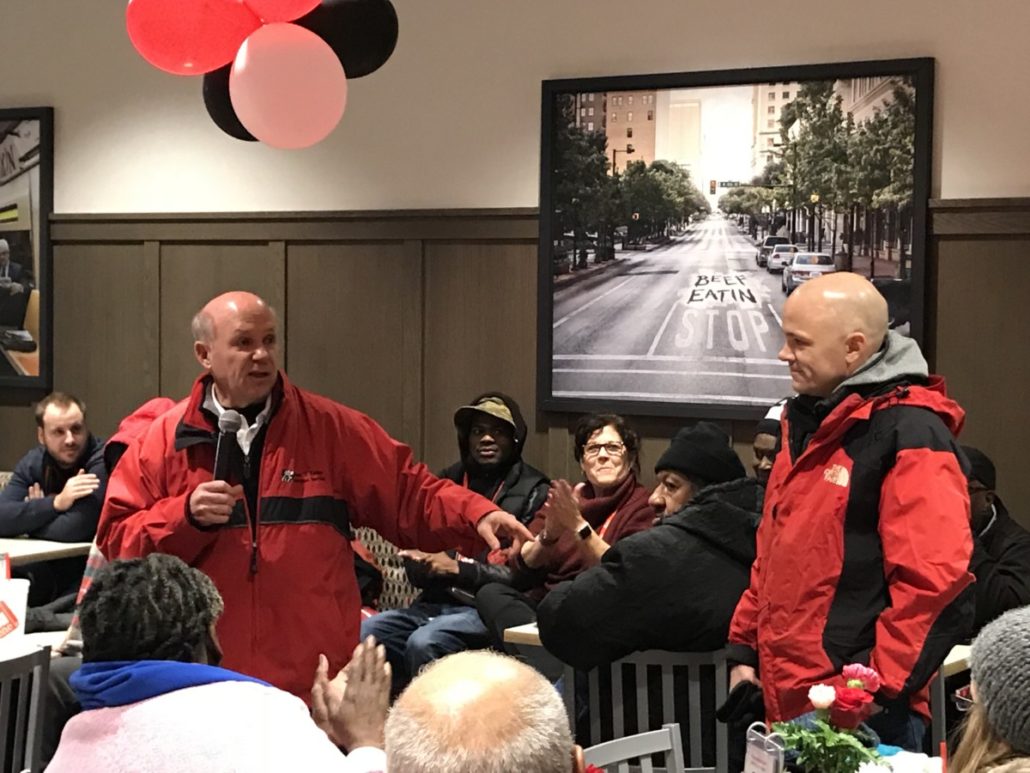 Dan Cathy and his son Andrew (Photo by Maria Saporta) 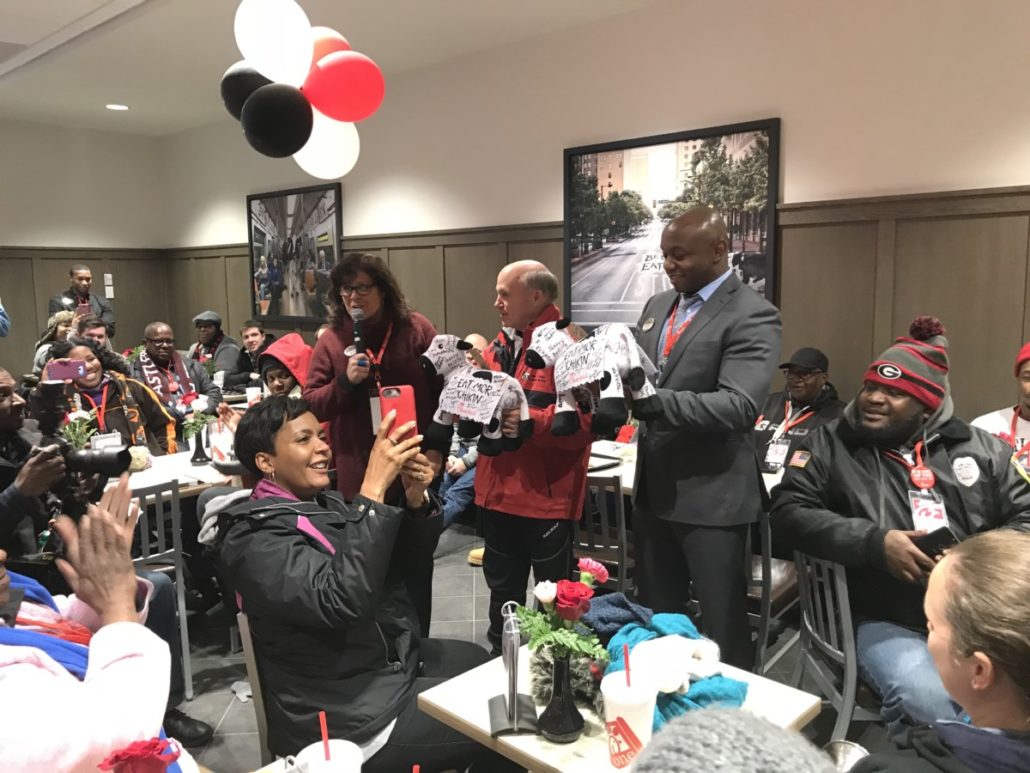 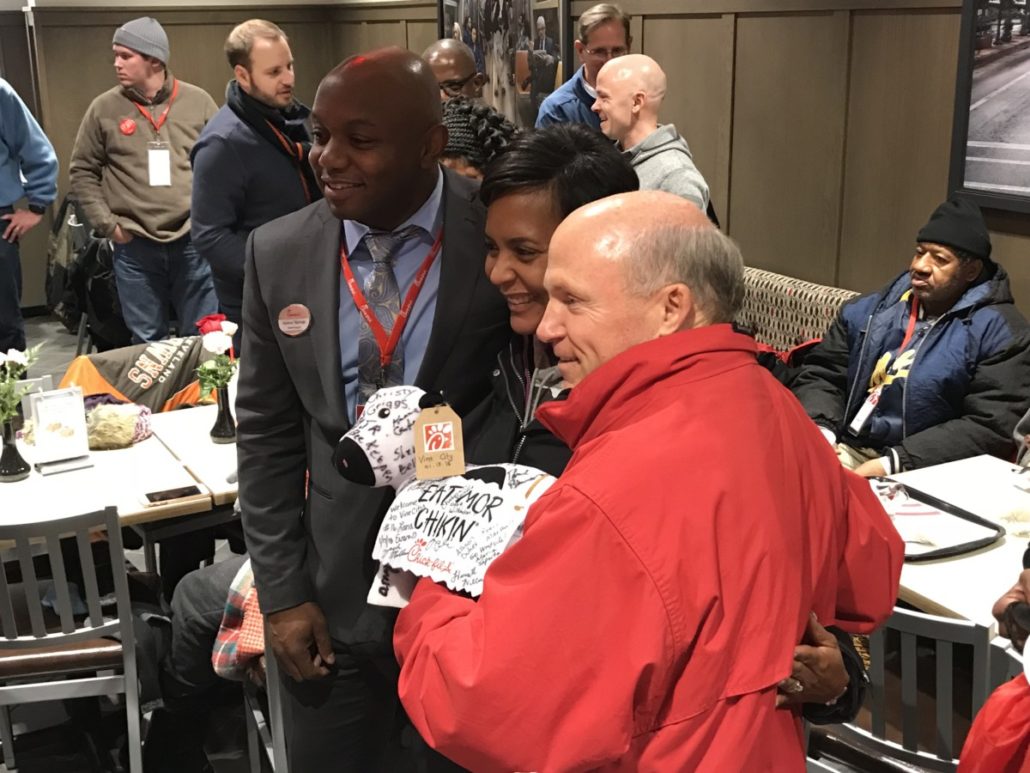 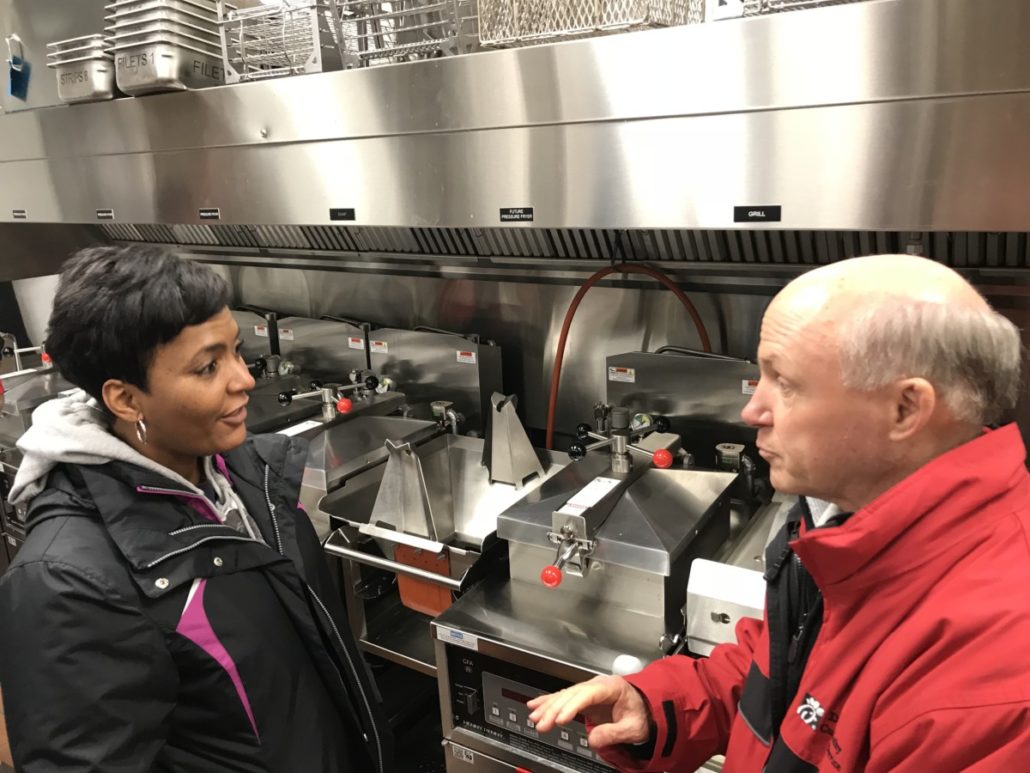 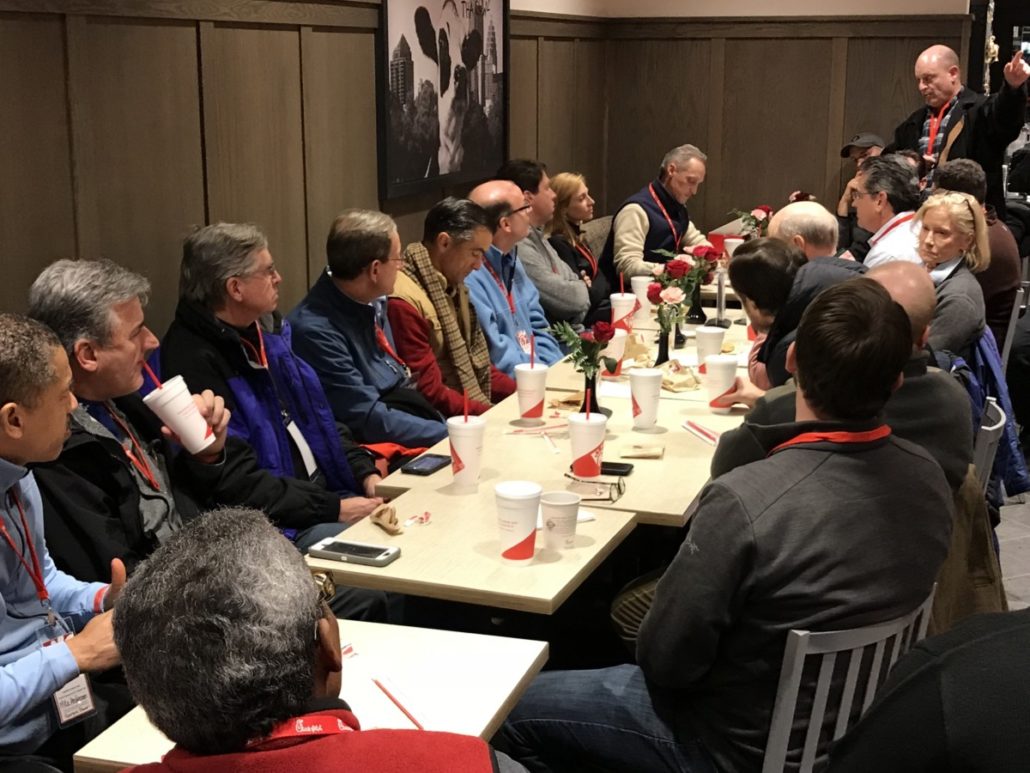 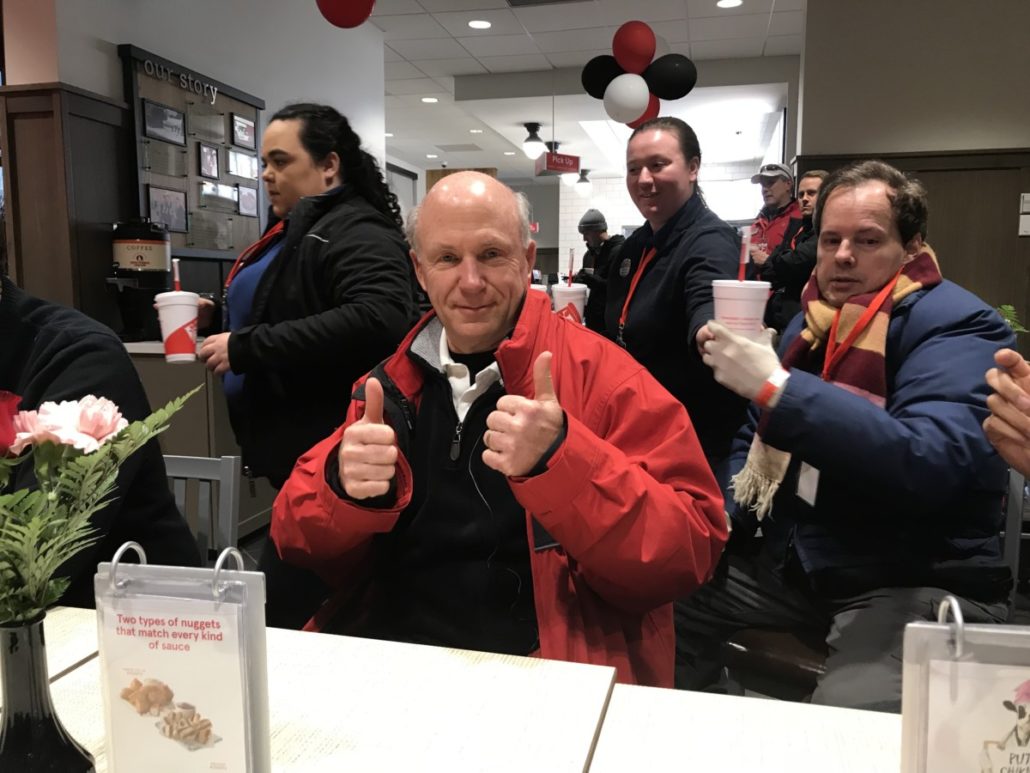 For Dan Cathy, it’s thumbs up (Photo by Maria Saporta)