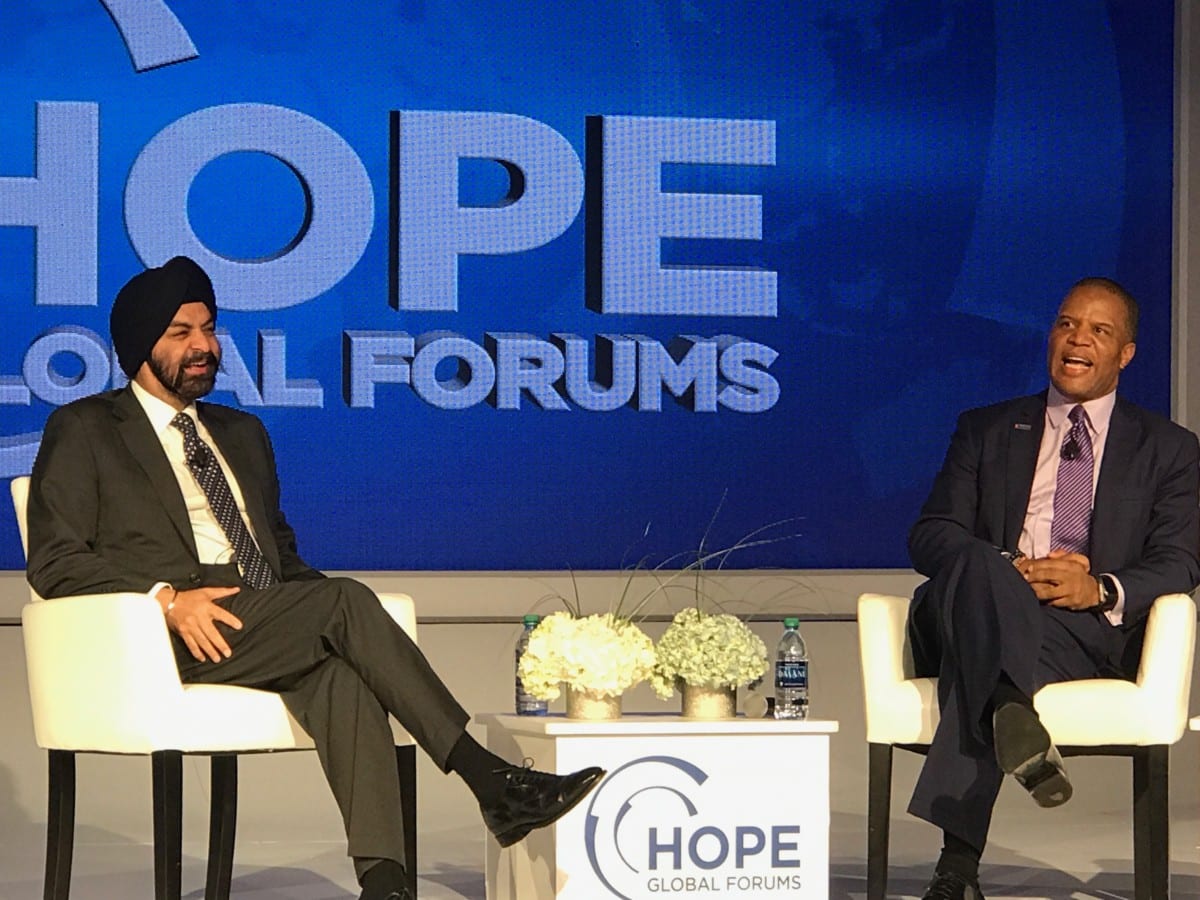 For several years running, Atlanta has become the venue for addressing the problem of poverty in the United States while focusing on solutions.

The convener is Operation HOPE’s Global Forum, which just met in Atlanta at the Marriott Marquis from April 10 to April 12. This year’s theme was “Uplifting the Invisible Class” – focusing on the people who have fallen  between the cracks.

The forum brought together the CEOs of major financial institutions, felons and everyone in between to take a deep dive on a myriad of issues that have contributed to the economic divides in our country. 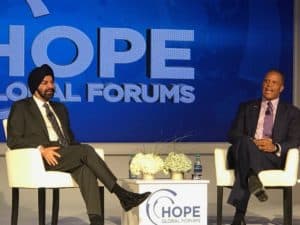 “This is not a black movement,” proclaimed John Hope Bryant, the founder and CEO of Operation HOPE. “It’s about blacks and whites finding a common ground. It’s about poverty. If you deal with class, you get race for free.”

A conversation between Atlanta Braves legend Hank Aaron and former Atlanta Mayor Andrew Young was one of many highlights. It started with Young asking Aaron how much money he made playing baseball. 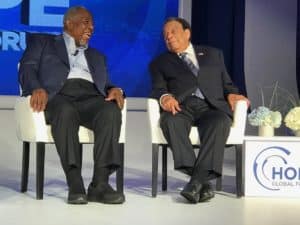 Hank Aaron and Andy Young talk about poverty, wealth and giving back (Photo by Maria Saporta)

“You made more money with Popeye’s than you did with homeruns,” Young said referring to Aaron becoming an owner of franchises. “Over the last 40 years you used your brain and your heart. You made an impact on this city with a baseball bat and a giving spirit.”

Aaron pledged to give back – seeking to help 755 young people realize their dreams through his Chasing a Dream Foundation. On his 65th birthday, $1 million was raised to support his foundation.

“I try not to get angry. I try to keep my cool,” Aaron said. “An angry man is a defeated person, and I don’t want to be defeated.”

To that, Young said: “Living in debt is living in hell and going deeper and deeper into the fire.”

When Bryant jumped on stage, he reminded the audience that in addition to Aaron’s record as having the most legitimate homeruns, he also holds the record for most strike outs.

“You cannot hit a ball that you do not swing at,” said Bryant, one example of how the Forum translated into life lessons for everyone. 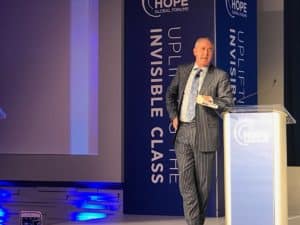 Tony Schwartz, CEO of the Energy Project who co-authored the Art of the Deal with Donald Trump, said “We are in a full-fledged energy crisis brought on by fatigue, fear, distraction and indifference.”

In order to be productive, people need to recharge their batteries. And when prompted by Bryant, Schwartz confessed to making a big mistake when he helped Trump write his autobiography – a book that helped shape Trump’s narrative.

“It’s a choice I will forever regret, and choice that I made,” Schwartz said. “The work I’m doing now is truly an attempt at redemption.”

The meat of the Forum, however, was focusing on how to bring the invisible out from the shadows. FICO’s Jim Wehman said there 3.3 billion people in the world who have no access to credit. In the United States, there are 53 million people without FICO scores, the key measure of whether someone can get a loan.

Martin Luther King Jr., a guiding light for Operation HOPE and the Forum, warned of the triple evils of war, racism and poverty 50 years ago. 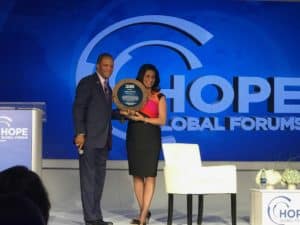 Operation HOPE is partnering with banks from across the country to locate “HOPE Inside” centers in banking centers. When someone is turned down for a loan, a bank can walk them over to the HOPE Inside counselors, who help the prospective borrower improve his or her credit score and help them get access to credit.

The FICO organization signed on as a partner – offering to provide Operation HOPE FICO scores for free (worth millions of dollars) and giving the organization $500,000.

In its 25-year history, Operation HOPE has served 2.8 million people – 1.8 million adults through empowerment programs and 1 million youth in more than 4,000 schools and community organizations.

One of the biggest local partners is SunTrust, which has adopted the “onUp” cause to help its customers build financial confidence. It located HOPE Inside seven of its branches, and it plans to expand them to 200 locations by 2020, according to Bill Rogers, CEO of SunTrust.

The first HOPE Inside was at Bank of the West, which proposed the partnership model (before Operation HOPE had its own centers) about 10 years ago. 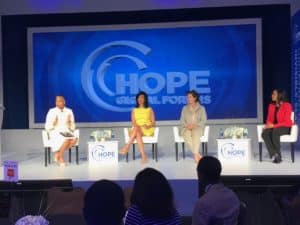 “Our Oakland branch, the first HOPE Inside center, has served over 20,000 people,” said Nandita Bakhshi, president and CEO of Bank of the West. “This partnership is clearly improving lives. It’s helping people emerge out of the shadows.”

“Trust in government peaked in 2008,” Edelman said. “More than half the people we surveyed don’t believe the system is working for them.”

No institution is immune. Business, which ranked better than government and media, is stoking fears and economic insecurity.

“Automation has caused the loss of four out of every five jobs in America,” Edelman said. “People’s impression is that its immigration and offshoring. More than half think Globalization is taking us in the wrong direction. Business is the last retaining wall in this tsunami. You must make the change. CEOS are seen as a class – people making too much money.”

One of the breakout sessions focused on “Changing Incarceration Nation.”

“We are in the land of the free, and yet we are the incarceration capital in the world,” said Raphael Warnock, the senior pastor of Ebenezer Baptist Church, who said many people in prison are non-violent, often there because of drug charges. “No one comes close in percentage and in numbers – 25 percent of the world’s prisoners are warehoused in the USA. We are locking up our future.”

Several panelists observed that criminals often are entrepreneurial, and they could be redirected to becoming legal entrepreneurs. 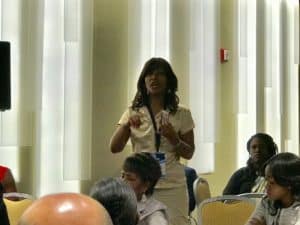 JoAnna ‘Flava’ Williams said after serving their time, felons should be able to re-enter society without stigma (Photo by Maria Saporta)

“We have to find solutions other than incarceration,” said George Turner, Atlanta’s retired police chief.

JoAnna “Flava” Williams then spoke up, saying she is a felon.

“We need to change the face of felons in America,” she said, adding felons need a way to re-enter society rather than being saddled with a stigma. “I served the time for my crime.”

Two full days of such conversation was energizing and exhausting at the same time.

“The sad point about poverty is that it’s becoming more entrenched in our society,” said Henry Cisneros, a former secretary of the Housing and Urban Development. “Our schools are segregated. The whole issue of deconcentration of poverty is something we have to focus on.”

Steve Bartlett, former mayor of Dallas, said it was time to reignite a new debate about poverty.

Cisneros chimed in saying that the answer to poverty was going to come from cities – places where there could be a platform for equity.

Tim Phillips, president of the Americans for Prosperity – which is funded by the Koch brothers, put it another way.

“It used to be that poverty was thought of as a big city problem,” Phillips said. “But it’s in rural areas. A two-tiered society is something that’s frightening. It inhibits the idea of the American Dream. It’s a two-tiered society where we are not talking to each other.” 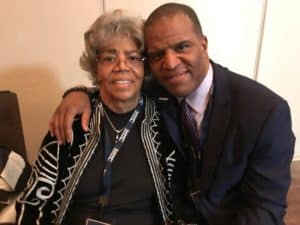 At the end of the Forum, Bryant clearly was tapped out.

“I’m on the last ounce of my human energy. I was reaching the edge of my capacity, and God walked in,” Bryant said. God came through his mother – Juanita Smith – had handed him a note pledging $250 to the cause, officially signing on to her son’s movement.

“She told me she loved me every day of my life,” said Bryant, who wished all children enjoyed a mother’s love. But at the very least, people should be given a chance to learn how to manage their money. “Who can argue that financial literacy should be a civil rights issue?” 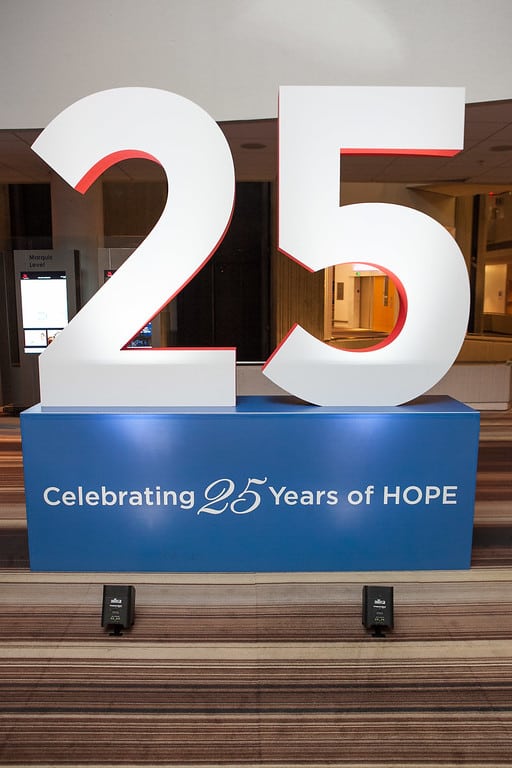 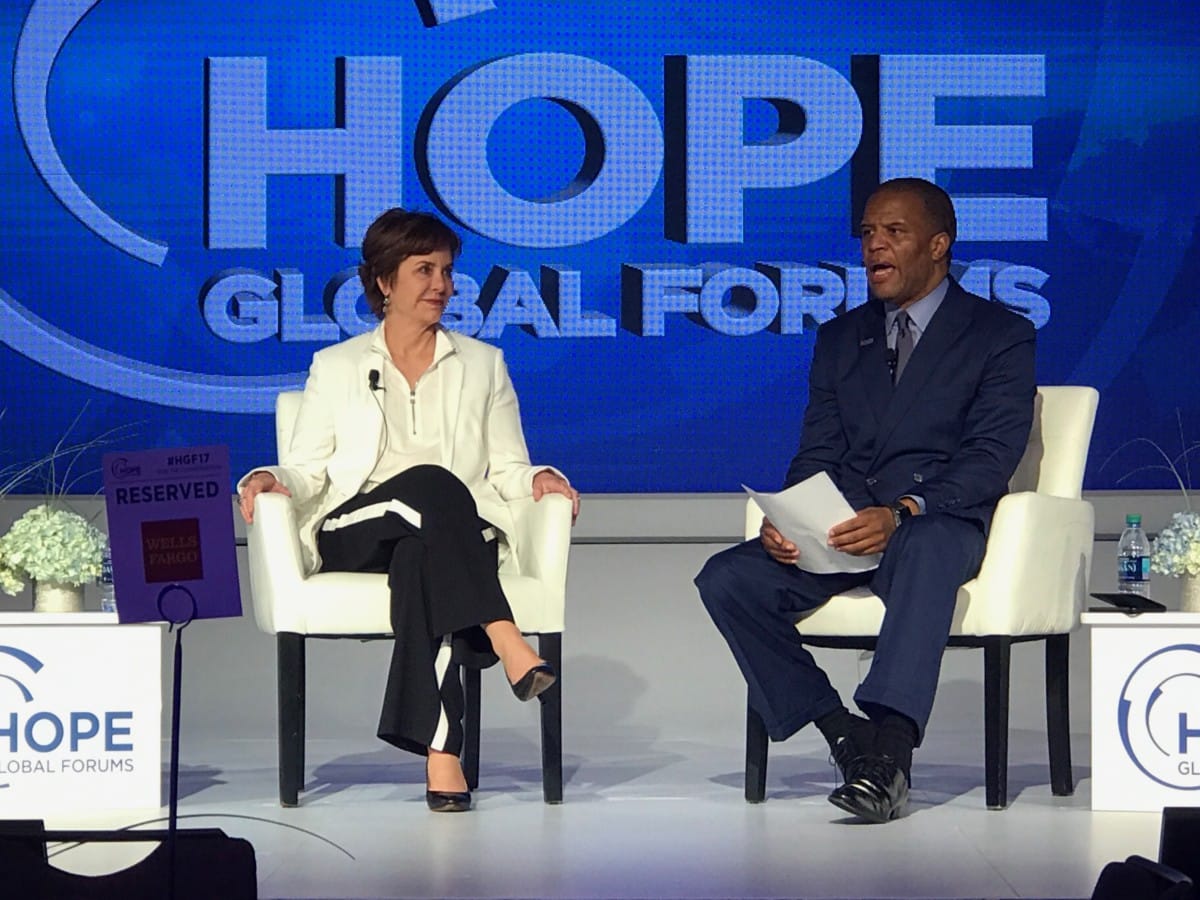 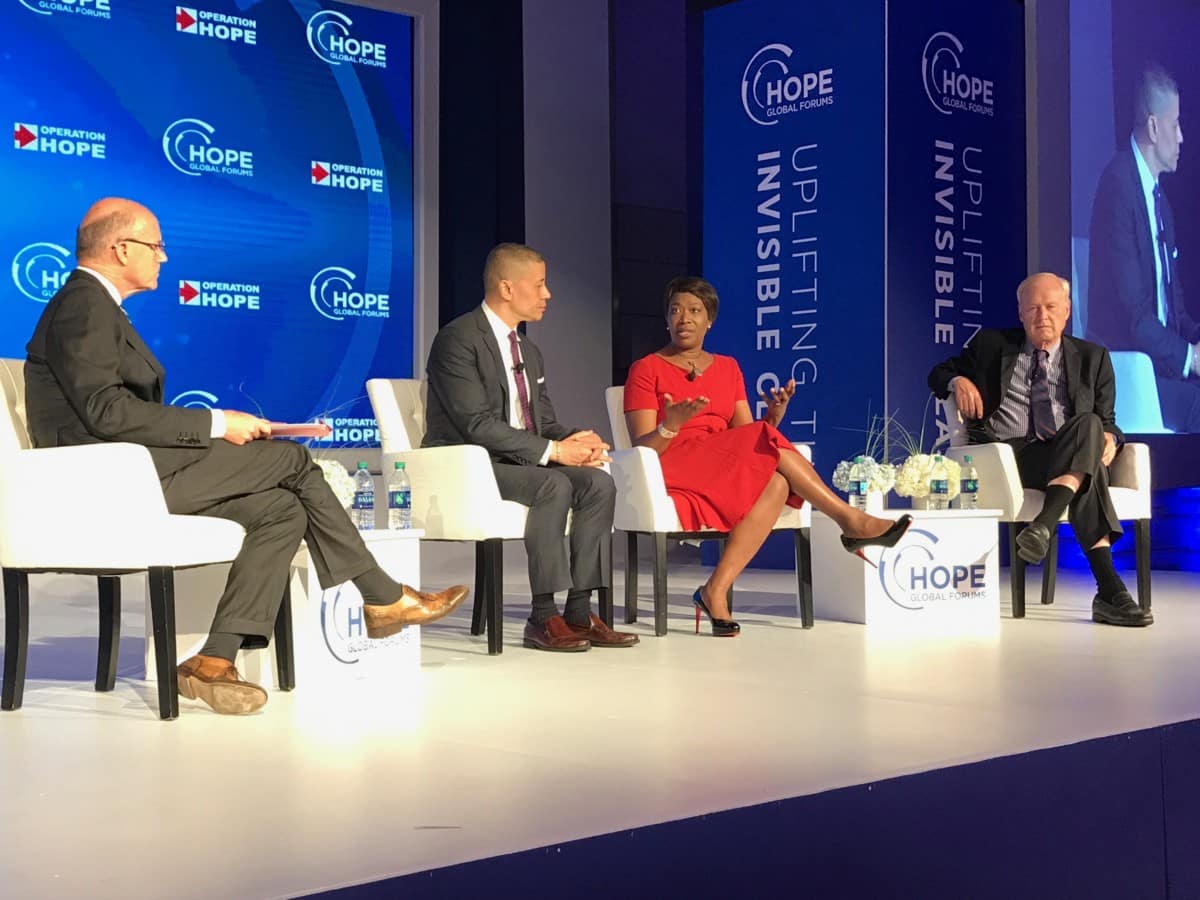 Previous Article
‘Tommy’s Honour’ perfect for scratch players, for duffers – not so much
Next Article
Marquee by Kelly Jordan