By Raisa Habersham and Maggie Lee

“It shows an astonishing arrogance and sense of entitlement for Georgia’s senior US Senator, to believe he shouldn’t have to debate at a moment like this in our history,” Ossoff said.

The thirty-minute discussion saw Ossoff answering questions on the global pandemic, criminal justice reform, and agriculture. He also took jabs at Perdue’s oft-reported stock trades made just before the pandemic crippled the American economy and killed more than 280,000 people. 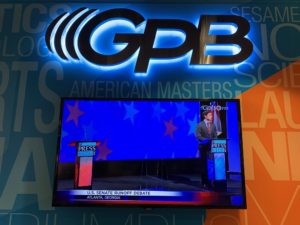 Earlier this year, the Justice Department investigated Perdue for stock trades made weeks before several states shut down amid the pandemic. Perdue has not been charged with any wrongdoing in the investigation, but Ossoff did not concede to that fact when asked.

“I haven’t seen one shred of evidence that David Perdue has presented that any federal agency has cleared him,” Ossoff said. “What I observe is that he has not yet been indicted for obvious financial misconduct.”

It’s unusual enough for any state to have two U.S. Senate races at once. But Georgia is the center of the American political universe for the next four weeks because of Democrats’ bet and the Republicans’ fear that the state could possibly vote blue, shifting the U.S. Senate majority.

If both Democrats won Georgia’s Jan. 5 U.S. Senate runoffs — Raphael Warnock and John Ossoff — that would give Democrats 50 U.S. Senate seats. Vice President-elect Kamala Harris would have a tie-breaking vote.

The U.S. House will continue to be majority-Democrat once new terms start in January. Democrats haven’t controlled the U.S. House, Senate, and presidency since the 2009-2011 U.S. House term.

Democrats from Georgia and across the country are trying to keep the momentum going among voters who made Joe Biden the first Democratic presidential candidate to carry Georgia since Bill Clinton in 1992.

Meanwhile, Republicans have a good argument that Georgia is still red — that it’s only a uniquely polarizing presidential candidate that turned off some GOP voters.

Perdue placed first in the first round of voting in November, a three-way race that included Libertarian Shane Hazel. Perdue racked up about 88,000 more votes than Ossoff of about 4.95 million cast.

Republicans also outperformed Democrats in the first round of voting for the seat now held by Kelly Loeffler. The “jungle primary” for this special election consisted of 20 candidates from four parties, plus independents. All the Republicans added together had about 48,000 more votes than all the Democrats added together.

During the debate, Ossoff again and again urged people to vote, promising things like a new Civil Rights Act, new infrastructure and a higher minimum wage — but only if people vote.

Ossoff has been campaigning with Rev. Raphael Warnock, whose opponent is Republican Incumbent Kelly Loeffler.

Georgians have until Dec. 7 to register to vote. Early voting in the Jan. 5 runoff begins Dec. 14.