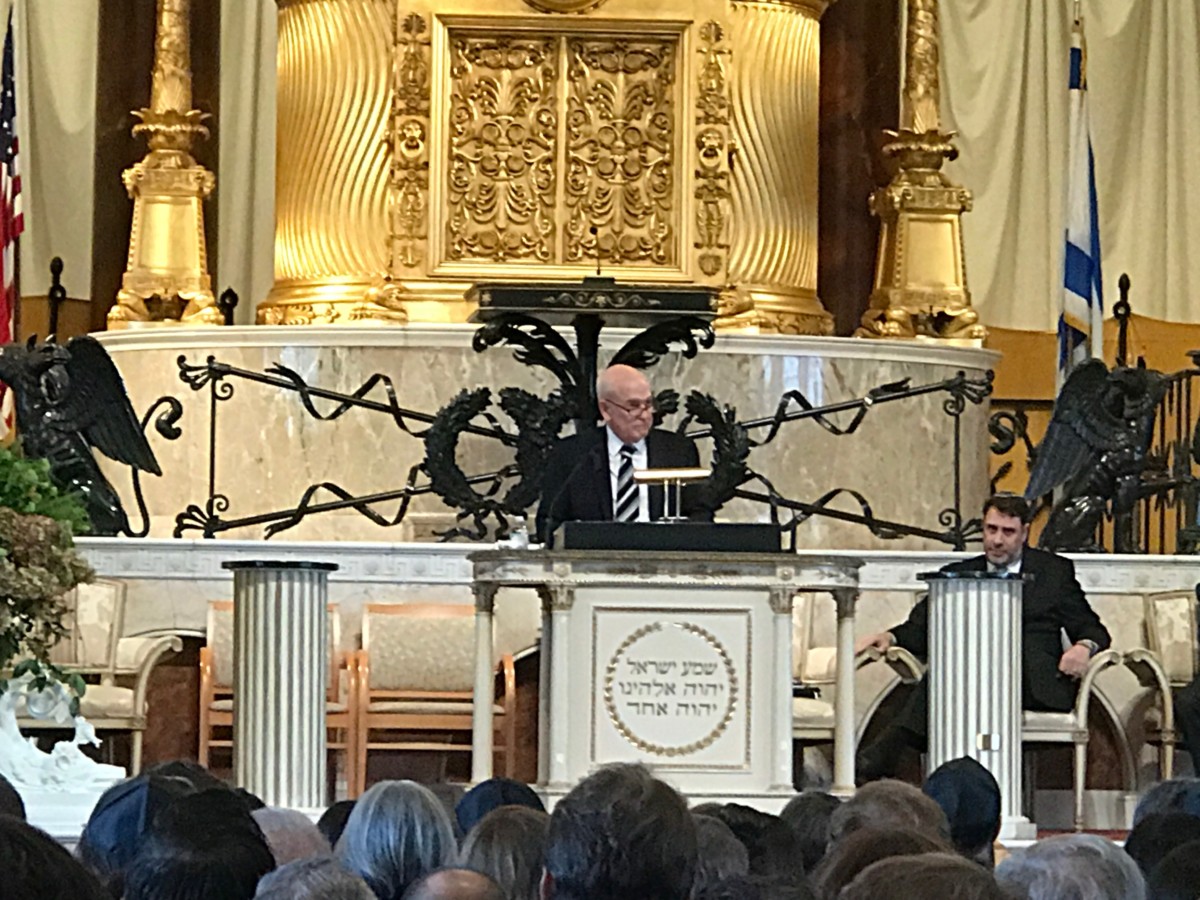 Nearly 2,000 people came to the Temple on Peachtree Street – with standing room only in the Sanctuary and Covenant Chapel as others sat in the Schwartz-Goldstein Hall.

“I thought I might be teared out until I saw all of you here and the two other rooms,” Steve Selig told people attending the service. “Our family is overwhelmed by your presence.” 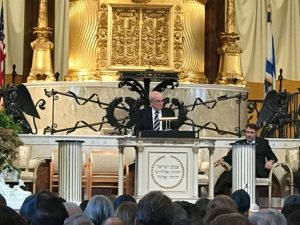 His son, Scott, 47, passed away on Friday morning after a year-long-battle with Stage 4 cancer. During his last year of life, a movement of support called “scottstrong” took a life of its own as people pledged to provide strength to Scott and to fight for a cure for cancer.

Rabbi Peter Berg expressed what everyone was thinking

“Children are supposed to bury their aging parents; parents should not bury a young son,” Berg said. “It’s out of order. Death like this is not supposed to happen.”

In an amazing show of strength, Steve Selig spoke about his son for 20 minutes – trying to hold back his tears so he could speak on behalf of his family, colleagues and friends.

The symbol “scottstrong” became a rallying cry for family, friends and associates of Scott Selig

Steve Selig said that Scott falling victim to lung cancer made no sense.

“He didn’t drink. He didn’t smoke. He ate right. He exercised,” Selig said of his son. “He was the healthiest person I knew until he wasn’t.”

Selig went on to say his son’s life had a purpose with his involvement  in a host of civic initiatives, including Leadership Atlanta, the Ron Clark Academy, the Council for Quality Growth, to name a few.

“In our business, he was a visionary,” said Selig, the CEO of Selig Enterprises. “He could see things in the future that others could not see, especially me.”

Then Selig sorrowfully acknowledged that they had had a succession plan for Scott to succeed his father as CEO of the company next spring. 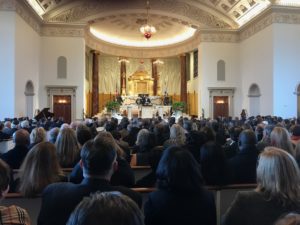 “Scott was a man’s man,” Selig said about his son’s social life. “He was always with a beautiful woman.” Still Selig spoke of how his son had a special relationship with Amy, the mother of his two sons, one that continued even when they were no longer married.

In some ways, Scott Selig had four parents – his father, Steve, and his mother, Janet. After his parents divorced and remarried, Linda Selig became mother 2; and Jeff Bernstein became father 2.

Then speaking to Scott’s two sons, Steve said: “Cooper and Sam, he had so much love for you. As you go through life, your dad will be at your side.

“As for me, I lost my son, my fried, my advisor, my colleague, my companion, my hero,” Steve continued. “Frankly, I have lost of piece of my heart.”

Then his sister Mindy Shoulberg spoke of how Scott was her big brother – despite being 14 months younger than her. She spoke of how fortunate she was to have worked with him at Selig Enterprises, and how honored she was when he entrusted her with a top position at the Works, a Selig development in northwest Atlanta.

Blake Selig said two people could not be more different than he and his brother.

“Scott is one of the healthiest people I know having protein shakes and a protein bar,” said Blake, who enjoys milk shakes. “My protein bar is called Snickers.” 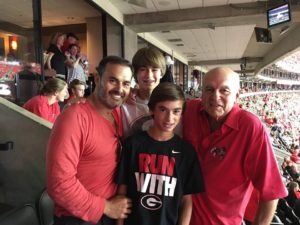 Scott was a man of fashion, shopping in the best stores to get just the right look. Blake said his idea of fashion is going to Men’s Warehouse or Marshall’s.

“He was totally a ladies man,” Blake said. “I, on the other hand , started dating my wife in 10th grade, and we are still together.”

Lastly, Selig’s 17-year-old son, Cooper, spoke. “I never thought a day like this would come. Everything being said about him is true,” he said. “Having a father like him has prepared me for life.”

The service ended with a guitar solo from Scott Thompson, who sang a song in memory of his friend: “This is where the cowboy rides away.”

Click on the link to read the family-placed obituary.