Partnership for Inclusive Innovation looking to continue momentum into 2023

Some of the PIN team. (Photo by PIN.)

The Partnership for Inclusive Innovation (PIN) is headed into 2023 hoping to continue solidifying Georgia as a center for innovation.

PIN came out of a task force led by Georgia’s Lt. Gov. Geoff Duncan who was looking to position Georgia as the tech capital of the East Coast.It is described as a “foundation crossed with an action tank with committed public-private sector leadership that can focus on long-term investments in geographically disturbed, nontraditional, underserved and emerging areas,” according to PIN’s 2022 impact report.

Debra Lam, Founding Executive Director of PIN, says she is proud of the impact that the partnership has been able to have in just its startup years.

As noted in the name, PIN takes aim in inclusive innovation, which it defines as, “improving access and opportunities for all Georgians to drive innovation and creating an opportunity for all of us to thrive together as part of the innovation ecosystem,” according to its website. “Inclusive innovation includes geographic, racial, gender and socio-economic equity.”

Lam says a lot of innovation and technology has not been shared equally across the state.PIN is hoping to change that while leasing Georgia into its next era.

“We think about who can innovate; not just your startups, but local governments, schools, communities, nonprofits… a much wider collection of organizations and people versus your traditional startup innovators in Atlanta if you will,” Lam explained.

The next place for tech

PIN is looking to help transform Georgia at large as the tech capital of the east coast. It has four key aspects to achieve this: public-private partnerships, statewide focus, inclusive innovation, and a hybrid model.

Lam says it’s important to note that while Atlanta is the state’s largest city and much activity takes place in Metro Atlanta, PIN is not exclusive to Atlanta and is committed to all areas of Georgia — from the urban centers to the most rural. 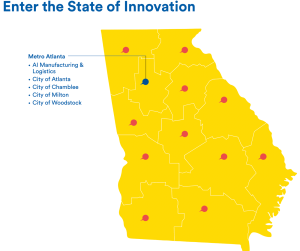 A map of PIN projects across the state. (Photo via PIN website.)

“We really cover every single pocket and know that we should be embracing geographic diversity rather than ignoring it,” Lam said. “The idea is that if it can be done in one place, hopefully it can be shared, modeled and scaled elsewhere.”

Lam continued that in some cases you may get better traction in small communities than in a populated place like Atlanta, further emphasizing a need for geographic diversity. Ensuring this also plays into the inclusive innovation aspect, says Lam, which is focused on increasing access and opportunities for everyone to innovate towards a goal of shared economic prosperity

Another aspect of how PIN operates — the hybrid model — Lam clarified is not in reference to teleworking. Instead, she says, it references the organization as a fund-intermediary.

“We provide financial capital, so we’re actively giving grants away. But we’re coupling that with social impact, and that means it’s not enough that we give you money and come back a year asking for an annual impact report asking you what you’ve done with the money,” Lam said. “We want a different kind of relationship, where we leverage the public-private partnership and ask ‘who or what else do you need to succeed and how can we help?’”.

Lam says one of the things that makes PIN so special is that it’s an action tank, not a think tank.

Like the four aspects of the organization, PIN has four pillars: economic opportunities, student engagement, community research and workforce development. The four pillars each have a flagship program with multiple projects that move PIN from a think tank to an action tank.

“Each of these pillars can stand alone, but they’re really powerful if you start putting them together… we don’t want to compete [with established ecosystems], we want to improve and leverage the ecosystem,” Lam said.

The four pillars can be divided into two types, says Lam: empowering the organization (community research and economic opportunity), and development at the individual level (student engagement and workforce development).

Some of the projects under the pillars include Georgia Smart, which focuses on smart local development. Others like Workforce for Tomorrow offer early career professionals to work as a fellow for six months in the public sector, six months in the private sector. In total, PIN has around 30 projects across the four pillars in all kinds of sectors ranging from cybersecurity, to agriculture to infrastructure research.

While PIN looks to continue strengthening its work in Georgia, it also has hopes for expansion. Lam said PIN distributed about $1.3 million throughout in 2022, and is expected to distribute about $3 million this year.

PIN is also looking to go beyond the state and move towards a regional model.

“What does that look like if we talk about Southern innovation?” Lam asked, saying she’s excited for the chance to help define it.

Lam credits the board and partners for PIN, but especially the PIN team who has been spearheading efforts of making the action tank a success.

“We definitely couldn’t have done this without the team, and you wouldn’t know that because we’re so small [as a team], so I really want to make sure I acknowledge them,” Lam said.