As Georgia Power was preparing to announce its succession plans and the transition of its top leadership from Paul Bowers to Chris Womack, Hurricane Zeta was swooping across the Southeast causing massive power outages.

“This is the side show,” Bowers said about the news he would be retiring in April after a period of transition of the top roles to Womack. On Nov. 1, Womack will become president of Georgia Power, and he will assume the roles of chairman and CEO next spring. 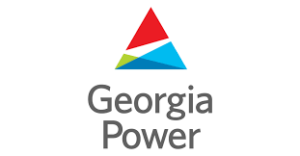 At 6 a.m., Bowers and Womack were on a call to rally the troops to restore service to about 630,000 Georgia Power customers who had lost electricity at some point overnight, largely due to falling trees knocking out power lines.

Another way to look at the transition is that leaders come and go at Georgia Power (and its parent – Southern Co.), but the organization must remain centered on delivering service to customers.

This transition is particularly significant given that Womack will be Georgia Power’s first African American CEO, a fact that both he and Bowers downplayed during an interview Thursday morning. 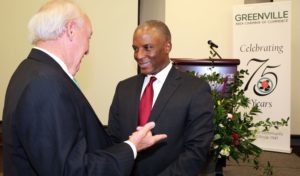 Chris Womack, a Greenville, Ala native, on Feb. 18, 2016 when he was the guest speaker at the Greenville Area Chamber of Commerce. He is speaking with Horace Horn Jr., a PowerSouth Energy Cooperative vice president (Photo credit: Mike Kittrell/Alabama NewsCenter)

“Yes, I’m black,” Womack said nonchalantly. “I also have 32 years of experience with this company.”

Bowers chimed in. “Chris is African American. That’s a fact. But his performance is what gave him this opportunity.”

One of the mainstays of Georgia Power and the Southern Co. is how they groom their leaders from within by giving them opportunities to lead throughout the system while getting to know their counterparts throughout the region.

“It’s an honor,” Womack said. “It’s an exciting time to be coming back to Georgia Power. In my 32 years at the Southern Co., I’ve spent nine years at Georgia Power in a couple of different roles. It will be a very smooth transition. Paul has been a mentor of mine in 30 years of my tenure. It is a wonderful opportunity to follow in Paul’s footsteps.”

Through his various experiences within the system, Womack was able to get know Bowers, who also held multiple roles over his tenure with the company before becoming Georgia Power’s CEO 11 years ago. 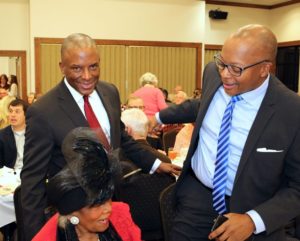 “One of the things we do so very well is this whole leadership, succession planning,” Womack said. “We have the Southern Co. college, an opportunity to learn the business by bringing individuals together….  As I moved through different roles, Paul and I had the opportunity become friends and mentors and mentees. That’s one of the things that makes Georgia Power special. You build these relationships over a long period of time.”

In looking to the future, Womack said he looks forward to building on Bowers’ commitment to making Georgia Power as efficient as possible and always seeking to improve the organization.

“I will build on that,” Womack said. “You will see me move around a lot and create a lot of enthusiasm for the work we do.”

The timing of the transition will occur when Plant Vogtle’s Unit 3 will be able to load fuel, which is expected to occur in April. At that point, the Unit will be synced to the grid, and then there will be a “shake down” to finalize all the systems. Bowers said the final go-ahead for Unit 3 to be operations will likely occur in the third quarter of 2021.

Womack said he knows one of his responsibilities as Georgia Power’s CEO is to take on leading civic roles in metro Atlanta and across the state. 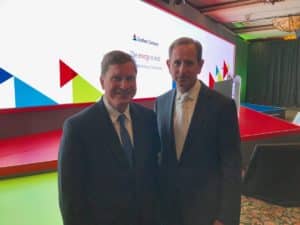 When asked about his interests, Womack talked about his role as chairman of the East Lake Foundation, and how he would like to develop similar efforts across the state.

“I’m really interested in the whole broad topic of poverty and the income gap,” Womack said. “I would like to improve poverty conditions throughout this state.”

Meanwhile, Bowers and Womack needed to turn their attention to the real task at hand – getting power restored to hundreds of thousands of Georgia Power customers (Southern Co. had a total of 1.2 million customers who had lost power.

“I would say we will be working thought the weekend to get everybody’s power back on,” Bowers said. “You will see a lot of the restoration today.” 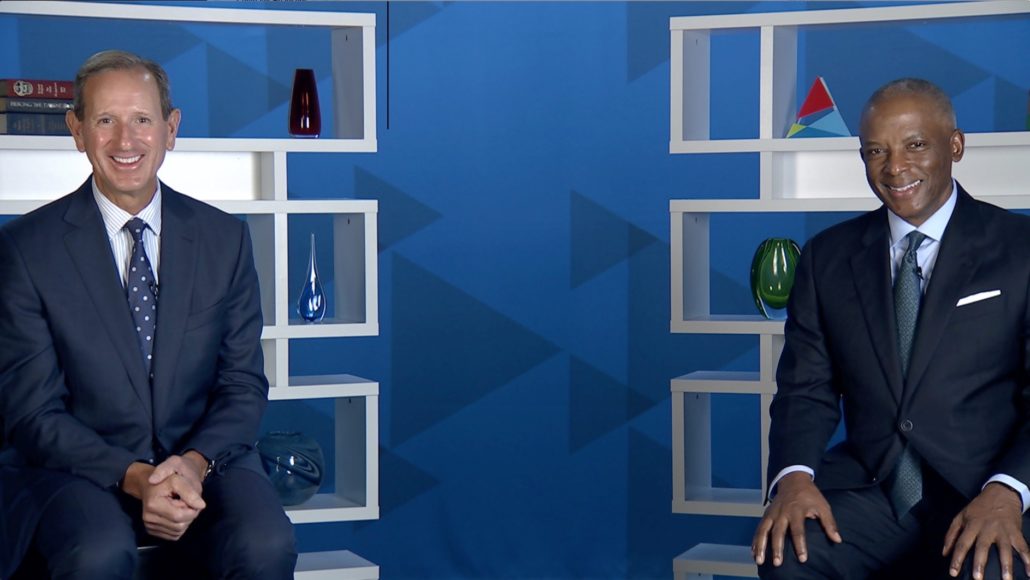