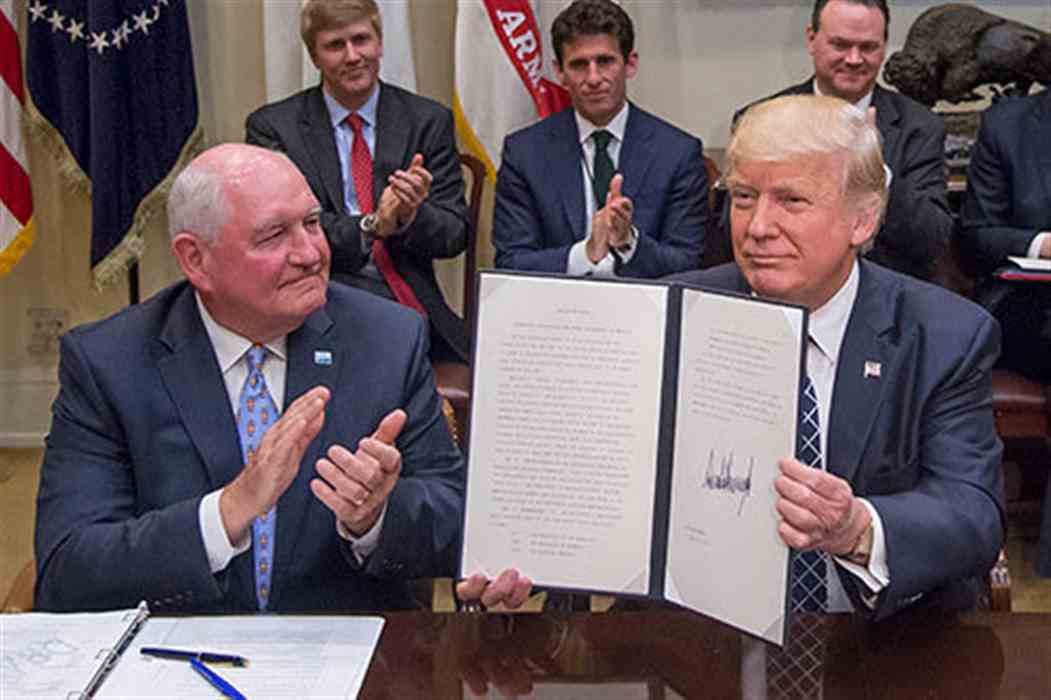 All the way up to the week he took over his new job, Sonny Perdue has been an afterthought.

The former Georgia governor was the last cabinet official to be nominated by President Donald Trump and the last to be confirmed by the U.S. Senate. His past controversies, Oaky Woods and so forth, hardly roused a sniff of disapproval amid all the other ethics scandals roiling the pond in the administration’s early days.

A few eyebrows were raised when the confirmation process began to drag, but that turned out not to be due to any unearthed scandal, but because the White House was weeks late getting his paperwork to the U.S. Senate. His confirmation vote, wedged into a busy schedule before the spring break, finally came in an evening session last week.

And then, shazam. In his first four days on the job last week, Perdue may have had as real an impact as any agriculture secretary in memory, and anyone in the current cabinet, excepting the brass.

With the 100-day milestone approaching — a period which both the president and the media treated like television sweeps week — Trump was “really ready and psyched,” as he told Reuters, to follow through on a campaign pledge and sign an executive order scrapping the North American Free Trade Agreement (NAFTA).

Alarmed business leaders barraged the White House with calls when the word got out, and Commerce Secretary Wilbur Ross weighed in against the move. But by the best accounts, what seems to have been most effective in convincing Trump not to pull the plug on the treaty was a map produced by Perdue showing the overlap between the areas which would be hardest hit by a NAFTA pullout and those that voted most solidly for Trump.

“It shows that I do have a very big farmer base, which is good,” Trump told the Washington Post later. “They like Trump, but I like them, and I’m going to help them.”

The president sent out a tweet saying the leaders of Canada and Mexico had called and asked him to renegotiate the treaty instead of terminating, and he had agreed, provided the United States got a better deal.

“Relationships are good — deal very possible!” he tweeted. And that was that.

“Oh come on,” you might be saying. “You’re trying to convince me that after all Trump’s talk about NAFTA, it took a bald-headed ex-governor from Georgia shoving a map under his nose for him to realize this complication?” Or maybe by now you aren’t saying those kinds of things anymore.

On his fourth day in office, Perdue waded into controversial waters once again, saying he had hired a labor lawyer away from the American Farm Bureau to help him draft a blueprint for a program that would allow undocumented agricultural workers to stay in the United States, provided they broke no laws. The president, he said, was on board with this.

“He understands that there are long-term immigrants, sometimes undocumented immigrant laborers, out here on the farms, many of them that are doing a great job, contributing to the economy of the United States,” Perdue told Harvest Public Media. “That is not his focus nor will that be my focus.”

To understand how a position paradoxical as this could be politically viable, one needs a keener understanding of all that can be meant by the word “rural,” and in that respect Perdue could be of great use to his new boss, a very urban president with a very rural base.

Small town and rural America has been heavily impacted by changes in the economy and gave Trump some of his strongest support. At the same time, the agricultural economy which operates within that larger framework of rural America depends on immigrant labor to pick its berries and tomatoes, prune its orchards, process its chickens and gin its cotton. It’s an intricate system in which the patterns of immigration, what people do and how long they stay here to do it, vary dramatically over relatively short distances.

There are box stores in south Georgia which make a substantial portion of their annual revenue in the brief period when the onion and berry pickers get paid and buy things to send back home. This does not escape the notice of those who are sliding down the economic ladder, but they want the store manager jobs, not the berry pickers. In these places, the political gyroscope balances between the necessities of the haves and the passions of the have nots.

This paradox is nothing new to those who have seen rural legislators battle get-tough legislation introduced by suburban legislators. It is new to Trump, which is why Perdue may in the long run prove not to be an afterthought, after all.