As we count down the days to 2014 Music Midtown, I wanted to spend time with festival organizer Peter Conlon to hear his point of view of how the event was evolving in relation to Piedmont Park and the surrounding communities.

Conlon, president of Live Nation Atlanta, has been a concert promoter in the city for decades. He has seen it all and done it all. Conlon and his former business partner – Alex Cooley – who now owns Eddie’s Attic in downtown Decatur, started Music Midtown in 1994 on a site that now holds the Federal Reserve Bank of Atlanta.

It has seen its ups and downs and even a six-year hiatus before re-emerging fin 2011 in a scaled-down form at Piedmont Park.

But during the 2013 Music Midtown, a serious downpour on the second day of the festival turned the grassy meadow at Piedmont Park into a muddy mess as more than 55,000 people came to listen to the Red Hot Chili Peppers on that Saturday night for the main event.

That led me to write a column the following day with the following headline: “Loving Music Midtown and Piedmont Park shouldn’t be mutually exclusive.”

Conlon was not happy with that column, and we had tried to connect to talk about it. But months passed, and the year got away from us. Then when Music Midtown applied for its 2014 festival permit for Sept. 19 and 20, the issue resurfaced as the Midtown Neighbors’ Association and NPU-E voted to not support the event.

I asked Peter Conlon if he would sit down for an interview and share his thoughts. 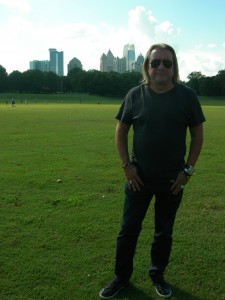 The next day – on Friday, Sept. 5 – we were sitting at one of the outside tables at the Park Tavern overlooking the very meadow where the Chili Peppers had played last year.

“I hope last year was the worst-case scenario we will ever have,” Conlon said. “But we will always leave the park better than we found it. We did it when we put on the Green Concerts. And we did it last year.”

Conlon went through a long list of what Live Nation does for Piedmont Park and city as part of its agreement to put on Music Midtown every year.

It has negotiated a $400,000 permit fee that it gives the city – more than any other Class A festival. It also gives the Piedmont Park Conservancy $100,000.

It pays for all the city services related to the festival – security, traffic management and waste management. It pays to repair any damage to the park, including placing sod where grass has been damaged or destroyed..

“Last year, we spent more than $100,000 remediating the park,” Conlon said. “We put down mulch, and we put grass in places where there had not been any grass before. We did things that had not been there before we held Music Midtown.”

But the neighborhood has complained that after last year’s festival large portions of the meadow were fenced off for months as the park’s green space recovered from Music Midtown.

Inevitably they ask whether an event as large and impactful as Music Midtown belongs in Piedmont Park, the city’s most attractive and popular green space.

Conlon was quick to say that he loves Piedmont Park. Until two years ago when he moved to Buckhead, he had spent 35 years living in Morningside and Virginia-Highlands so he could be close to the park. He has seen it in its dilapidated days, and he has seen it be reinvigorated with the tender, love and care of the Piedmont Park Conservancy – an organization he personally supports.

But then he quickly added some historical context.

By comparison, Conlon said the 2014 Music Midtown will sell up 80,000 tickets – for a total of attendance of 160,000 over two days. The Cotton States and International Exposition also lasted a total of 100 days.

Still Conlon emphasized that Piedmont Park “was never designed to be someone’s backyard.”

In Conlon’s eyes, great cities have great music festivals. And the return of Music Midtown is a boost for the city’s economy.

“This is a good event for the city,” Conlon said. “It puts us on the map with other cities and their music festivals. They are economic drivers for cities. During Music Midtown, the hotels, bars and restaurants are full. People are spending money.”

Conlon also said it is one of the biggest weekends for MARTA ridership as well because so many concert goers take transit rather than drive.

When asked if Music Midtown should be located at a different site where there’s more hardscape (pavement) rather than green space that is vulnerable to being damaged when more than a 100,000 people trample over it during a weekend – especially a rainy one.

We went through the list. What about the Civic Center site where Music Midtown was at for several years before it was discontinued for six years.

“The Civic Center site was a lousy site,” Conlon said. “Attendance went down every year. People didn’t like standing on asphalt. People voted on the site by not buying tickets.”

Then referring back to Piedmont Park: “You can fix grass.”

What about Centennial Olympic Park? Too small. It can’t accommodate crowds of more than 25,000.

Both Chastain Park and Grant Park – although they are large parks – do not have an area designed to handle the 100,000-plus patrons currently coming to Piedmont Park.

Eventually, the Bellwood Quarry park along the westside of the BeltLine could be an option, Conlon said, but it would be many years before the city developed the quarry into a water reservoir and the property into a park.

At one time, Fort McPherson – with 180 acres of existing green space bordered by two MARTA stations – had been viewed as an alternate site for major city festivals. But current plans by film-maker Tyler Perry to turn 325 of the 480-acre site into a studio complex would put most of that green space behind a sealed off area with undefined or limited safeguards for that open space to remain undeveloped.

So Conlon said that Atlanta has few, if any, locations available for Music Midtown other than Piedmont Park.

As for the surrounding neighborhoods, Conlon said Live Nation has tried to be responsive to most of their concerns. But he added that the biggest neighborhood complaint – traffic plans and management – is controlled by the City of Atlanta and not by Live Nation.

And about the noise during the festival, Conlon simply stated: “It’s loud. It’s a festival. It’s a loud festival. But it’s only for two days.”

This will be the fourth year Music Midtown has been in Piedmont Park. The first year, there was only one stage (Coldplay was the big act in 2011) with about 35,000 people attending the one day festival.

The second year, the festival expanded to two stages over two days with about 50,000 attending each day (the Foo Fighters and Pearl Jam were the big acts).

The third year, the festival expanded to three stages and had about 125,000 attendees over both days (Journey headlining Friday night and the Red Hot Chili Peppers on Saturday night).

“We lost a tremendous amount of money the first two years,” Conlon said about the resurrection of Music Midtown. “It takes years to build up an event. We made a little bit of money last year. But we didn’t make enough to recoup what we had invested the first two years.”

This year, he hopes the festival will do even better, but there are no guarantees. Conlon said his budget is about $12 million with half going to paying the artists.

Putting on outdoor festivals can be a gamble – making sure people buy their tickets well in advance of the show so they won’t be fair-weather fans.

Conlon said he believes there’s potential for growth, and he will work with the city and the community about any plans to add other stages or an extra day. But he also added that it will never be the size it once was.

Conlon also said that after the neighborhood association and NPU-E voted against the festival permit, he was glad the City issued a statement in support of Music Midtown:

“The Department of Parks and Recreation is committed to ensuring that Music Midtown continues to be an integral part of our city’s arts and cultural fabric, while minimizing impact to the surrounding communities of Piedmont Park.  While we faced extremely challenging weather conditions last year, the park recovered relatively quickly and the Department will continue to work with the festival organizers to remediate the park grounds in a timely fashion.  The festival organizer is 100 percent responsible for those costs.  Together, the Department of Parks and Recreation, Mayor’s Office of Special Events, and the Atlanta Police Department with the support of Piedmont Park Conservancy, will continue to work together to make Music Midtown successful for both patrons and residents.”

Conlon obviously is doing everything he can to minimize the opposition to Music Midtown because he does not see other short-term options for the festival.

“This is our Central Park. It is a great place for music festivals,” Conlon said. “There is no other place where can do major festivals in the city. If we can’t have Music Midtown at Piedmont Park, there’s nowhere to go. We’re done.”

Then he added: “We are not here to trash the park. We are always going to leave it in better condition than we found it. We are trying to give Atlanta the festival it deserves. We are a big national festival again.”

So you tell me.

Is loving Music Midtown and Piedmont Park mutually exclusive? Or can we do both?