Petite is the new macho: Unearthing mystery and controversy in South Africa 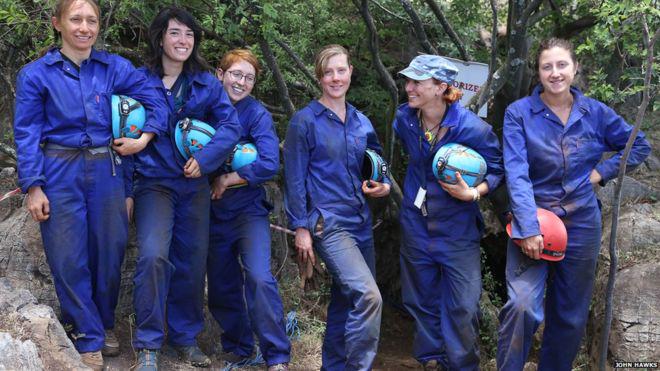 Why would anyone dispose of a body by taking it down into a cave, then dragging it through a long hole less than 10 inches high, pulling it across another cave chamber and up a jagged wall of rock, and then dropping it down a long chute that is in some cases less than eight inches wide? And not do this once, apparently, but many times?

What makes this an even deeper mystery is that the perpetrators were not modern humans, but an early hominid species, possibly more than two million years old.

This discovery at the Rising Star Cave in South Africa has produced a Georgia hero: Hannah Morris, one of the six women excavators dubbed the “underground astronauts” who brought the fossil remains to the surface. Morris grew up caving and climbing with her father at Pidgeon Mountain and is working toward her doctorate in archaeology at the University of Georgia. In 2013 she answered an intriguing Facebook appeal sent out by paleoanthropologist Lee Berger, seeking skinny, athletic paleoanthropologists or archaeologists with experience in climbing and caving. Within 10 days, she was part of an international team which had been hastily put together after the initial discovery of the fossils by two South African cavers to insure that the fossils would be removed under scientific scrutiny.

Petite is the new macho. Earlier this month, the results of the team’s expedition was announced with great fanfare.

“When we unearth our past, we also unearth knowledge about our present,” South African Deputy President Cyril Ramaphosa said at a press briefing. His words were accurate, perhaps in more ways than he meant.

We tend to think of the political argument over science as distinctly American, but it has overtones in many places. The South African government has invested considerable prestige in the Cradle of Humankind World Heritage Site, where this and other important discoveries have been made and promoting the country as “the place where our collective umbilical cord is buried.” But there is argument about that even within Ramaphosa’s African National Congress party.

Mathole Motshekga, an ANC member of parliament, said stories about “subhumans” are “why today no African is respected anywhere in the world.” The South African Council of Churches has also condemned the find, and a prominent labor leader, Zwelinzima Vavi, tweeted, “No one will dig old monkey bones to back up a theory that I was once a baboon.”

Within the scientific community, controversy swirls around this discovery as well, not only concerning Berger’s conclusion that it is a previously undiscovered branch of the prehuman bush, Homo naledi, which deliberately deposited its dead in this deep recess, but also about the way in which the discovery was brought to light.

Berger, an American who teaches at the University of the Witwatersrand (mercifully referred to as “Wits” in South Africa), was already at odds with many in his field over his argument that South Africa, not East Africa, is where the genus Homo first evolved. The discovery at Rising Star Cave put him in charge of by far the largest trove of prehuman fossils ever discovered. To speed the analysis, Berger ignored normal protocols and brought in younger scientists to assist in the evaluation of more than 1550 fossils from 15 individuals. Even more fossils are said to await unearthing in the cave.

Financed by the National Geographic Society and documented with an eye toward broadcast at every step of the way, the methods employed in the Rising Star Cave discovery have “pioneered a practice of science for the 21st Century,” said Adam Habib, the vice-chancellor at Wits and a noted South African intellectual. It is a practice both open source, and with a powerful media buy-in.

“We often think about science as having no boundaries. But in our world, scientific knowledge has become commodified, and too often what should be the bequest of the world, the bequest of a common humanity, is locked up under pay walls that post-graduate students and researchers cannot get access to,” Habib said.

Critics have complained, however, that Berger’s claim to have found a new species is premature, that Homo naledi is a “media species” created to justify the considerable amount of hype around the discovery.

Which brings us back to those bones. Whatever they turn out to be, how did so many of them get into so remote a place? None of the explanations ventured so far, including Berger’s, make much sense. The Hercule Poirot in us might raise at least an eyebrow back at the two cavers who made the initial discovery, but this find is far too extensive and its location much too inaccessible simply to have been “salted” by a couple of amateurs. Before this find, there simply weren’t that many fossils of this kind.

But almost in passing, the excellent National Geographic story notes that the cavers felt that extracting the bones quickly was important because “It was clear from the arrangement of the bones that someone had already been there, perhaps decades before.”

Only decades? This is a mystery that’s a long way from finished.