This week, LAURA MCCARTY, of Georgia Humanities, introduces Carolyn McKenzie Carter, whose work as a photographer, journalist, and tourism consultant will be honored this week by Georgia Women of Achievement.

The mid-twentieth century was a time of profound changes in American society, many of them thanks to World War II.  Women especially saw new opportunities. In Georgia many women, such as those who built airplanes at Bell Bomber, followed the example of “Rosie the Riveter” and joined the industrial workforce in support of the war effort.  As a photographer, journalist, and tourism consultant, Carolyn McKenzie Carter captured these changes, even as she participated in them as a professional woman.

A native of Moultrie, located in southwest Georgia, Carter was born in 1919. She was a childhood friend of Elizabeth Shingler of Ashburn, who later married Herman Talmadge.  (In 1977, Carter and Jean Robitscher helped Mrs. Talmadge to write the cookbook How to Cook a Pig & Other Back to the Farm Recipes).  Carter graduated from the Ward-Belmont Schooln Nashville, Tennessee, where the offerings included academics, art, music, speech, dancing, and sports. 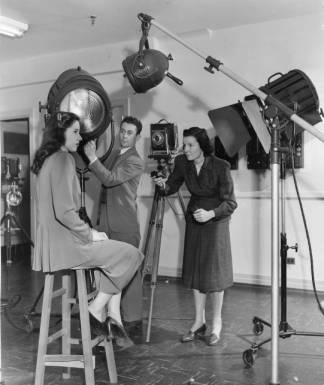 Carter returned to Georgia for college at the Henry W. Grady College of Journalism at the University of Georgia, from which she graduated in 1940.  Soon afterwards, Ralph McGill, legendary editor of the Atlanta Constitution, hired her, and Carter became the first female photographer to work for the newspaper, working there for about a decade.  (McGill would hire another pioneering woman journalist, Celestine Sibley, in 1941).

Carter’s photograph for the Atlanta Constitution highlighted the changing world in which she lived. One of her photos, a child model demonstrating an iron lung at Atlanta’s Grady Hospital, showed that Georgia had become a center for polio treatment since Franklin D. Roosevelt established the Warm Springs Foundation in the 1920s.

Carter’s postwar work also covered the Baby Boom and women who chose to work outside of the home, as she herself did, even after marrying Don Carter, a reporter for the Atlanta Journal, in 1942.  What began as a rivalry became a strong partnership in journalism, as the couple followed his career path, which included stints in Macon, New York, and Washington D.C.  (Don was a native of Plains and the cousin of President Jimmy Carter; he ended his career as vice president for news for the national Knight Ridder newspaper chain.) 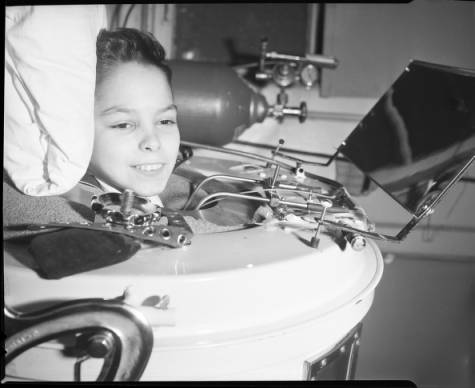 A child demonstrates the use of an iron lung. Courtesy of Georgia State University

During the 1950s, Carter began to work for the Coca-Cola Company’s office of information on the monthly employees’ magazine, The Refresher.  Though she no longer reported the news for a general audience, Carter played an important role, with her finger on the pulse of an exciting topic: no Georgia business has had a stronger history of effective marketing than the Coca-Cola Company, and during Carter’s tenure there, the company was busy expanding into an international brand, spurred on by the demand of American soldiers serving overseas.

According to journalism historian John Greenman, it is here, as a commercial photographer, that Carter did her most significant work.  Between 1954 and 1966, she traveled the world, photographing operations and employee engagement.  According to Greenman, her images contain a “cool, industrial feel, somewhat like the magazine images of Margaret Bourke-White.” The Professional Photographers of America designated her as a Master Photographer and she was the first woman “Man of the Year” from the Industrial Photographers of America in 1962.

This 1947 photo shows a physical therapist demonstrating the use of arthritis equipment. Courtesy of Georgia State University

The State of Georgia also benefited from her photography, as Carter began to consult for the Georgia Department of Commerce (now the Georgia Department of Economic Development) as it began to promote Georgia to tourists, eventually turning the state itself into an international brand. Her work in journalism helped Carter recognize the significance of travel writers, and much of her consulting involved representing Georgia at trade conferences, hosting writers for familiarization tours, and hand delivering press kits to major newspapers across the United States and in Canada.  The Georgia Archives contains correspondence that shows Carter’s effectiveness in making contacts and cultivating writers to cover Georgia attractions. Her itineraries included visits to communities in every corner of the state, followed by months where she would go to other regions of the country. 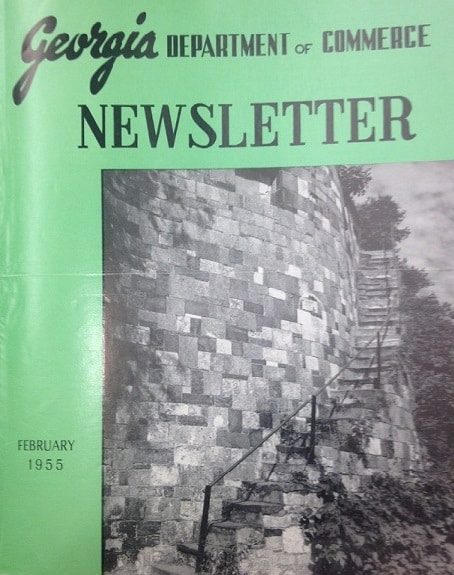 This Department of Commerce magazine features a Carter photograph on the cover. Courtesy of the Georgia Archives

Carter’s work in tourism combined the social skills of the domestic sphere with journalism.  She organized parties that featured Georgia-made products and delicacies at trade conferences.  She collaborated with staff and volunteers from local chambers of commerce and sites, advising them on the best ways to position their communities to attract visitors. During the second half of the 20th century, tourism became Georgia’s second leading industry after agriculture. The efforts of Carter and other visionaries like Bill Hardman were important in making that happen.

Carolyn McKenzie Carter died in 2010. On March 9, 2017, she will be honored by Georgia Women of Achievement, along with landscape architect Clermont Huger Lee and public librarian Lucile Nix.  The ceremony is at 10:00 a.m. at Wesleyan College in Macon.  Admission is free, although registration is required.