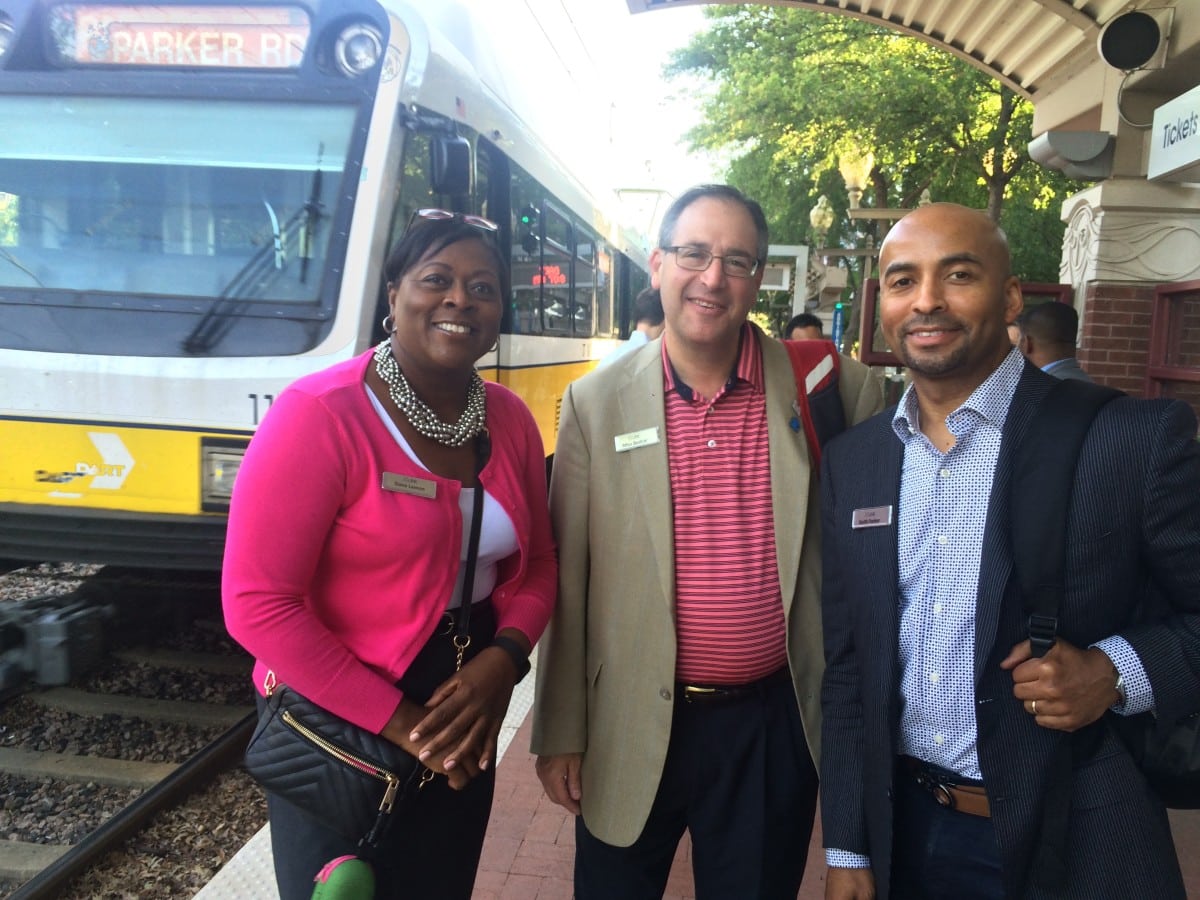 The 110 regional leaders rode DART (Dallas Area Rapid Transit) light rail system to Plano, an historic suburban town in the northern part of the region that had been trying to rejuvenate its central district for decades. 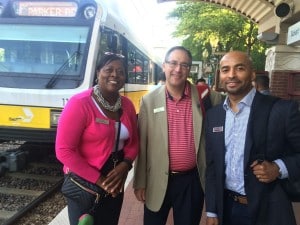 “It really took DART to be the catalyst of change,” said Frank Turner, Plano’s former deputy city manager who had worked patiently with the community to seize the opportunity of a transit connection to downtown Dallas. DART began serving downtown Plano in 2002.

In 1960, Turner said Plano only had about 3,500 people living in the town. Today, there are about 275,000 people in the city, which still has the feel of a small, walkable town that has been sensitively developed to blend in with the single-family communities.

“It’s been a booming suburb since DART,” Turner said. “In the last 15 years, it began urbanizing.”

Pam Hatcher, president of the Haggard Park Neighborhood Association – a residential community located in walking distance from the Plano DART station, talked about the people who were resistant to transit and change.

Roswell Mayor Jere Wood immediately identified with Plano – saying his city was the “Plano of Georgia without DART.” Wood asked how one can convince suburban residents to no fear urbanization, density and transit. 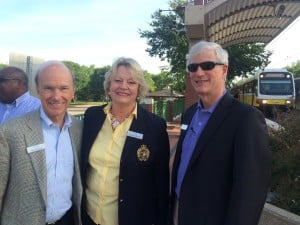 “It was not all kumbaya,” she said. “People moved to the suburbs for a certain kind of life.”

The idea of density with shared or less parking was not embraced by everyone, but Turner and others began educating the community of the potential.

One challenge was an undercurrent of prejudice. Hatcher described the sentiments of folks who felt DART would be like “running a pile of sewage to my front door. That’s what people are not saying when they walk into these meetings and talk about density.”

While DART did bring more diversity to Plano, Hatcher said she and her children especially have been so enriched by the people who have moved to or visited Plano. “Plano is a much richer community because of it,” she said.

DART also has helped bring new corporate citizens to Plano – Toyota and State Farm to name two, and the community now has greater opportunity for jobs and living in a community that caters to residents of all generations. There also have been mixed-used developments that provide more places to live, shop, work and play. 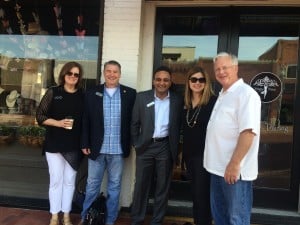 Wood and other communities in North Fulton have been debating about extending the MARTA rail line north to Alpharetta. While the mayors of the cities closer to Atlanta – Roswell and Sandy Springs – are open to such an extension, the mayors of Johns Creek and Alpharetta have been less than enthusiastic.

Johns Creek Mayor Mike Bodker, who was on the Dallas trip, said he is trying to learn more about the transit options. In fact, on the whole ride from Dallas to Plano, Bodker was asking MARTA CEO Keith Parker about different transit options and asking what might be most cost-effective.

“I sincerely believe we need to significantly expand our transit footprint in metro Atlanta,” Bodker said after leaving Plano. “I’m just trying to figure out which mode makes sense in each area because it’s likely that it’s not one-size-fits-all. Personally I would like to see something come sooner rather than later.”

Asked about his impressions of Plano, Bodker said: “I appreciate an active residential community with a vibrant downtown. I also saw how the introduction of DART didn’t ruin the community. It enhanced it. And it made it more accessible to the rest of the metro area.” 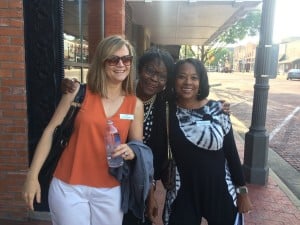 But Bodker said it’s not him who needs to be convinced. Many citizens in Johns Creek “don’t want density or development.”

Wood said he would love to invite the entire Roswell City Council to see Plano first-hand. Bodker also seemed open to having the Johns Creek City Council visit Plano. And Avalon developer Mark Toro tweeted Alpharetta Mayor David Belle Isle, who was not on the trip, saying: “Plano is a city that’s a lot like Alpharetta. They get transit. Will you visit with me?”

After the session, Toro – a pro-transit developer – simply said: “This is solid gold.”

The issues related to transit in both the Dallas and Atlanta regions are complex. Both regions have invested billions upon billions of dollars on their roads and highway infrastructure for the past 60 years. Although both had an extensive streetcar network before World War II, the vestiges of those systems have long been erased. 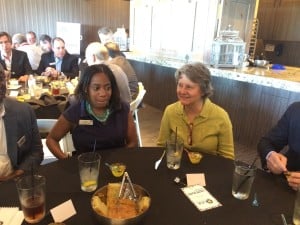 And in both cases, the thriving metropolitan areas are not getting financial support from their respective states to build out their transit systems. That means they have to rely on locally-funded transit plans that could be matched with federal funds.

Atlanta actually got a head start with transit when voters in Atlanta, Fulton and DeKalb approved MARTA in 1971. It built out most of its heavy rail system  of 48 miles in its first 20 years, and then it stopped expanding.

But those figures can be deceiving.

“We have nearly twice the ridership,” said Parker, adding that MARTA has about 439,000 daily passenger trips while DART has about 230,000 trips a day.

Yet Parker is envious of how Dallas has been able to expand its system, and MARTA has long-term plans to significantly expand its system – if it can get support from local governments and citizens to invest in transit.

“In 1979, Dallas had zero miles of miles of rail,” Parker said. “Since then, they have blasted past us, and they have more planned.”

Gary Thomas, DART’s president and executive director, said 13 cities, including Dallas, approved a 1 percent sales tax in 1983 for the light rail system. Because Texas caps its sales tax at 8.25 percent and the state collects 6 percent, local communities have to choose whether the sales tax can go to economic development, community development or transit.

“The challenge for us is to figure out…how to grow beyond our service area,” Thomas said, adding that DART’s board is considering broader opportunities to contract its services in communities outside its area.

Metro Atlanta also is weighing similar issues. As originally envisioned, MARTA was designed to serve the five core counties with rail. In 2014 (43 years after the original vote), a third county joined the system – Clayton.

For metro Atlanta to have a robust regional transit system, the hope is that Cobb, Gwinnett and both South Fulton and North Fulton as well as South DeKalb, the Clifton Corridor and areas inside the City of Atlanta will continue to invest in transit – especially rail. 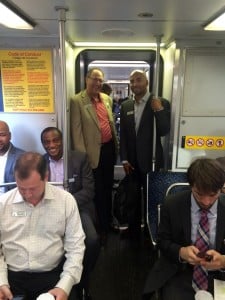 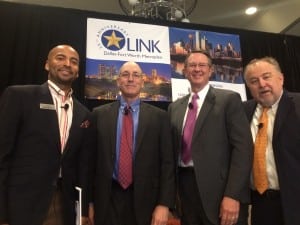 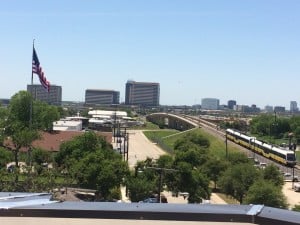