Plans for Underground Atlanta get even bigger

By Amy Wenk and Maria Saporta
As published in the Atlanta Business Chronicle on July 8, 2016

The developer planning to buy and remake Underground Atlanta has contracts to buy more than a dozen additional buildings in south downtown that have sat blighted for years.

Mount Pleasant, S.C.-based developer WRS Inc. has under contract about 14 buildings along Peachtree Street that sit south of Underground. 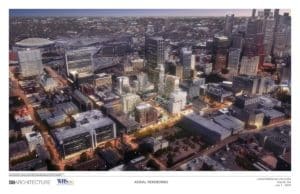 Those properties, such as the Metro Mall at 73 Peachtree St., include a collection of row-style buildings totaling about 240,000 square feet that once made up the heart of downtown Atlanta’s retail district.

Today, the aging buildings include tenants such as discount retailers and other small merchants.

WRS would renovate the buildings and bring in new ground-floor retailers.

“With most of them, the exterior architecture has been covered up,” said Kevin Rogers of WRS, who joined the company about four years ago but has long seen the redevelopment potential of Underground. “Our plan is to strip away and restore them — bring back the historic architectural skin. We can see the upper floors being for offices.”

Rogers disclosed WRS’ additional plans in a phone conversation July 5 when releasing brand-new renderings to Atlanta Business Chronicle of the Underground Atlanta project where investment could total up to $400 million. The plans show as many as seven high-rise buildings on the site. 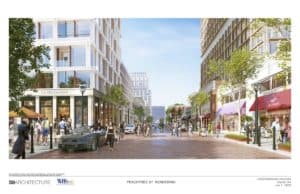 Potential tenants in the expanded Underground development could include national retailers and local merchants, such as those found in the Little Five Points neighborhood, Rogers said. WRS also looks to lure at least one or two local chef-driven restaurants, which have proven to be big draws for projects such as Krog Street Market in Inman Park.

“It’s a tremendous opportunity,” said Kristi Rooks, a former project manager with WRS who also once worked for Central Atlanta Progress. “A lot of users are really drawn to those historical aesthetics that are harder and harder to find in Atlanta.”

She added, “It’s really sort of up-and-coming. You get one chef-driven restaurant down there, and then suddenly, it’s a really good place.”

Those pending contracts come as WRS is about 30 to 60 days away from closing on Underground with Atlanta’s economic development agency Invest Atlanta, Rogers said. 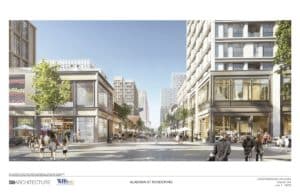 Since then, the sale has been delayed multiple times due to a necessary land swap, which involved the city of Atlanta trading Bobby Jones Golf Course in Buckhead for a state-owned parking lot in downtown that was needed for the Underground redevelopment.

In June, Atlanta City Council approved that land swap, which brought with it some controversy in the community.

Now, the hope is to break ground on Underground in about a year, said Rogers.

WRS will serve as the master developer of the project. Plans include both market-rate and student housing, a hotel, a grocery store, an entertainment venue and other commercial space.

The Kroger Co. is reportedly in talks to anchor the project, which would bring a much-needed grocery store to downtown Atlanta. But a lease has yet to be signed.

For Rogers, the recent momentum strengthens a belief he’s had in the potential of Underground for nearly a decade. 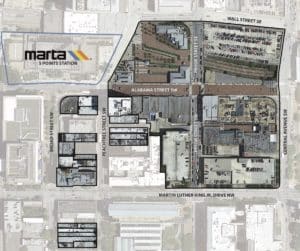 “I’ve always felt, long before our company had an active thought of getting involved with it, that Underground was wildly underutilized,” said Rogers, a former real estate executive with The Home Depot Inc.

Rogers cited the growth of Georgia State University, the influx of government workers in the area, the growing tourism hub in downtown, and the “tremendous” ridership from the adjacent Five Points MARTA station as compelling demand generators for the project.

“New things are happening in downtown, and they are pushing in the direction of Underground,” said Rogers, who is largely credited for bringing the opportunity at Underground to WRS.

Some retail experts see WRS acquiring additional property in south downtown as a potential game-changer for the area.

“Today, that space is definitely underutilized,” said John Bemis, Atlanta retail market leader for real estate services giant Jones Lang LaSalle Inc. “It’s a mixed bag of retail that doesn’t really work in any cohesive fashion from building to building. By amassing the real estate there, the developer will be able to take control of the area and hopefully better utilize the buildings.”