Atlanta gave the Points of Lights National Conference and its 5,000 attendees a special welcome on Monday.

“I’m so grateful y’all decided to return to the City of Atlanta after seven years,” Atlanta Mayor Kasim Reed told attendees at the plenary session at the Georgia World Congress Center Monday afternoon. “I know I’m a little biased, but I like to call Atlanta the capital city of service.”

Points of Light —  formed by a merger of the Points of Light Foundation (which was started by former U.S. President George H. W. Bush in Washington, D.C.) and the Atlanta-based Hands On Network (then led by its president, Michelle Nunn) — calls Atlanta home.

Neil Bush, the fourth of six children of Barbara and George H.W. Bush, serves as chairman of Points of Light.

Bush was quite active on Monday, first thanking volunteers for working with the homeless Monday morning at a gathering at Centennial Olympic Park during a boxed lunch event at the pavilion. 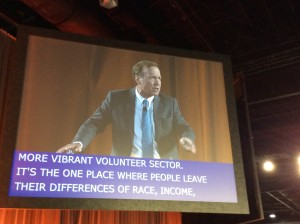 He is a big believer in volunteerism as a way to address community issues.

“I’m interested in putting boots on the street with a community-wide effort,” Bush said. “My personal passion is literacy. Literacy is the foundation upon which all human success is built. There’s an inter-generational cycle of illiteracy.”

Later in the afternoon, Bush kicked off the major program – thanking title sponsor UPS as well as Ann Cramer for chairing the Atlanta host committee.

He spoke warmly of his father, who was not able to come to Atlanta.

Instead Bush said that “Chelsea Clinton is in the house today,” and she’s like family because she is the daughter of former U.S. President Bill Clinton, “my brother from another mother.”

David Abney, chief operating officer of UPS who is also CEO-elect of the Atlanta-based shipping and logistics company, also welcomed the Points of Light National Conference to Atlanta will a special announcement. 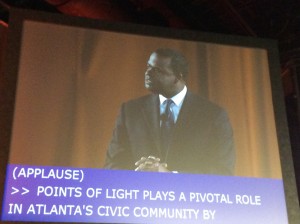 UPS pledged to complete 20 million hours of global volunteerism and community service by the end of 2020.

By achieving that goal, UPS’s total volunteer hours will have increased more than 12 percent and non-profits will have received volunteer assistance valued at more than $460 millionby the end of the initiative.

“Volunteerism has always been an integral part of our company culture,” Abney said.  “UPS’s founder Jim Casey continually advocated for employees to give back to the communities in which they live and work.  Our pledge of logging 20 million hours of volunteer service by the end of 2020 reinforces our corporate giving strategy and our commitment to our volunteering and philanthropic efforts that advance and enrich communities around the world.”

Since 2011, UPS employees have logged 5.3 million hours of employee service around the world.  Through the focused 2020 agenda, UPS employees will build upon their existing volunteer efforts to continue contributing impactful service to local communities.

In addition to its volunteer pledge, the UPS Foundation last year granted more than $1 million to Points of Light, the world’s largest organization dedicated to volunteer services. 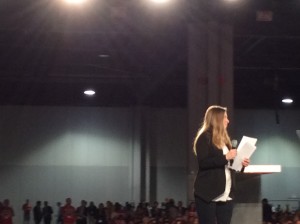 Chelsea Clinton addresses the crowd before moderating her panel

As the convener of the National Conference on Volunteering and Service, Points of Light has mobilized millions of people to take action in philanthropic activities that change the world.  This significant grant will support Points of Light’s global volunteerism efforts, which include disaster relief, veterans’ services, financial literacy, economic development resources and education.

“The UPS Foundation has been working with Points of Light for more than a decade,” said Eduardo Martinez, president of the UPS Foundation.  “Our programs with Points of Light have built capacity to mobilize new and existing volunteers and increased engagement with communities, businesses and non-profit organizations in volunteer leadership.  Together, we are paving the way for innovation, action and impact to make a difference around the world.”

In addition to the special announcement by UPS, attendees were treated to two memorable panels that reinforced the themes they will be hearing throughout the three-day conference. 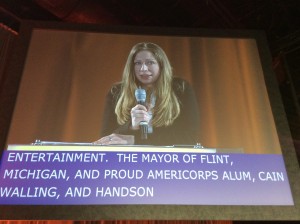 Chelsea Clinton on the big screen

King asked them how they were able to accelerate change during the Civil Rights Movement.

“None of us knew anything,” Young acknowledged. “We had a burning desire to help.”

But he added that they didn’t “give a damn about the consequences,” remembering that “in the Christian tradition, there is not change without suffering.”

John Lewis added: “If you see something that is not right or fair or just, you have to do something about it, but you have to be prepared.”

Several times the civil rights leaders quoted Martin Luther King Jr. “We must learn to live together as brothers and sisters or we will perish as fools,” Lewis quoted King. “We wanted to create a beloved world.”

“You have to make the world you want,” Vivian added. “The world can be what you want it to be.”

Lewis then told Bernice King: “I remember your father saying: ‘Just love the hell out of everybody.’ People who beat you, one day they will come and apologize. That’s happened to me so many times.”

The final panel was moderated by visibly pregnant Chelsea Clinton, who is vice chair of the Clinton Foundation. Joining her were Dayne Walling, mayor of Flint, Michigan; Kweku Mandela, partner and CEO of the Out of Africa Entertainment; and Bethaney Wright, a recent AmeriCorps graduate with Georgia Teaching Fellows.

Previous Article
Lightning in Virginia, and the low thunder of a court settlement
Next Article
Eric Cantor’s primary loss no cause for celebration for ‘do nothing’ Congress