Buckhead City Committee leader Bill White, his head covered in a towel due to wanting to protect two-month-old baby in his arms from the raijn left in the car by the suspect, speaks to officers as injured landscape worker Marvin Lopez lies on the ground following a Feb. 3 police chase crash at his Buckhead home. Bill White posted the photo on Instagram.

The crime and policing issues driving the Buckhead cityhood movement struck home, literally, for its leader on Feb. 3. A Marietta Police chase ended near Bill White’s house with a police car crashing on his lawn, hitting and seriously injuring a landscape worker.

The incident is informative for both sides of the cityhood debate. White, who leads the Buckhead City Committee, took to social media to say it shows omnipresent crime and some first-responder ineptitude that the new city would prevent.

But the incident was not a local crime. The pursuit was by out-of-town police from Marietta, an existing small city with high policing standards, and the suspect was wanted on warrants from elsewhere. Ambulance response reportedly was delayed by officers’ unfamiliarity with the area after crossing into another jurisdiction in the heavily incorporated metro area, a list Buckhead City would extend. The injured bystander underscores why the Atlanta Police Department (APD) has prohibited vehicle pursuits for many crimes — a decision that was met with outrage by many Buckhead residents in community meetings over the past two years where cityhood sentiment boiled.

Officer Chuck McPhilamy, a spokesperson for the Marietta Police Department (MPD), said the Feb. 3 pursuit complied with department policy, adding that such policies and judgments can be more complex than the public might assume. “I think as you move forward with a decision whether to become or not become a city, for Buckhead the questions are going to be far harder to answer when it comes to things like this,” McPhilamy said.

According to MPD, the incident began at a Motel 6 in Marietta, where a license-plate reader camera identified a car as belonging to a man wanted on a warrant for aggravated assault in the form of strangulation. The suspect, 27-year-old Marquez Wright of Mableton, was in the front passenger seat, MPD said. Wright is accused of fleeing as officers approached and striking one of the officers, who “wasn’t significantly hurt,” according to McPhilamy.

The pursuit continued south on I-75 outside of the city. During the pursuit, officers learned that Wright’s 2-month-old child was also in the car after getting a call from the child’s mother. The pursuit continued into Atlanta, where Wright’s vehicle turned onto Ridgewood Road in Buckhead. According to MPD and a witness, Wright abruptly stopped with flat tires at the intersection with Nancy Creek Road and fled on foot. He was captured a short time later.

Moments before, an MPD officer lost control in a curve and drove into the yard of the house at 3620 Ridgewood — home to White and his husband, Bryan Eure. The police car struck a landscaper who was identified by his employer, Ivy Landscaping, as Marvin Lopez.

Lopez was between the car and a decorative boulder on the lawn and suffered several injuries inducing a severe one to the leg, according to Ivy owner Ruffino Mar. Lopez remained hospitalized on Feb. 3, according to Mar, who said he thought the leg injury might prevent him from working in landscaping ever again. “You can put in metal and screws and put it back together, but it’s not going to be the same,” he said. 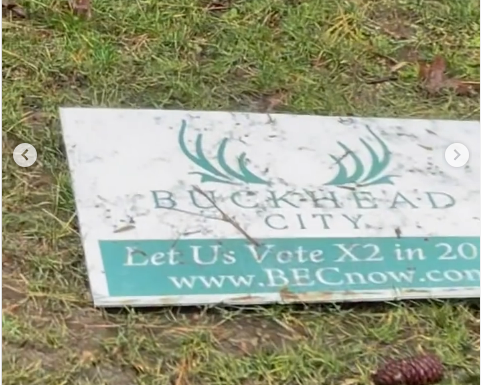 A Buckhead City yard sign was plowed over by a police vehicle during the Feb. 3 incident, as shown in a video posted on Instagram by Bill White.

On Instagram, White posted videos and photos of the scene after APD and the Georgia State Patrol (GSP) had arrived to aid in the cleanup and make reports. The images included Lopez on the ground, a Buckhead City sign that was plowed over by the police car, and White holding the child, whom he said was left behind in the car by Wright. In related comments, Whited called for prayers for Lopez. He criticized both anti-cityhood advocates and much of the public safety response.

Criticizing cityhood opponents as soft on local and Fulton County-related crime, White said it has “struck HOME today AGAIN on our beautiful quiet Buckhead block.” As it turns out, neither the suspect nor the police were from Atlanta or Fulton. MPD says Wright was wanted on two warrants — one from Cobb County and one from the City of Smyrna.

White praised the police for a “great job” in quickly capturing the suspect, but, citing his former work as an EMT and EMS captain in a New York town, he criticized an ambulance response time of over 25 minutes and said Lopez was left on the muddy ground even longer.

“40+ mins on the scene is BS. Every minute counts,” White wrote. “Poor leadership on scene and no traffic coordination of responding units.”

“Overall a C+ for the police (who I love) and a D for responding Grady ambulances,” he concluded. “Know exactly how we’re NOT going to do this in @buckheadcityga – Bigtime.”

McPhilamy acknowledged the ambulance delay and said it was due to a “sort of a worst-case scenario” for police operating outside their familiar jurisdiction.

“The reality of the whole situation is that I can’t imagine being the homeowner, hiring a crew and then seeing one of these crew struck in my own front yard,” McPhilamy said. “That has to be a traumatic and surreal experience for Mr. White. What I can say is, we’re thankful that the injuries weren’t worse. Obviously, our thoughts and prayers go out to this worker and we hope he is able to make a full and speedy recovery.”

McPhilamy said that in normal situations, police officers call an EMS service contracted by their city or a local hospital that serves it. Within their own city, the officers also know how to give any special directions and estimate response times. But for MPD officers who found themselves on the back streets of Buckhead, that was all but impossible.

“It becomes a game of telephone tag,” said McPhilamy, with officers having to call local 911 or police to determine who the local ambulance service is.

Then there’s the issue of what MPD was doing in Buckhead in the first place in what White called a “high-speed” chase. Police chase policies have been controversial in Atlanta since 2020 when former APD Chief Erika Shields banned pursuits entirely after crashes that killed bystanders; however there was still an end-run available to APD officers because they could still call in Georgia State Police to persue fleeing suspects.

As crimes like street racing rose that year, Buckhead was a hot spot of outrage over the policy. At the very end of 2020, current Chief Rodney Bryant instituted a new policy allowing pursuits in cases where the suspect was believed to have committed a violent felony and was an imminent danger to the public.

MPD’s pursuit policy is a bit looser, allowing chases if there is suspicion the suspect “is committing or has committed” certain felonies related to violence against people or arson.

In Wright’s case, McPhilamy said, MPD decided the warrant for a violent felony allegedly committed sometime in the past was enough. He said the accusation that Wright hit a police officer with his car also might have been enough rationale for the chase, but the officer was not “significantly injured” and that choice might have been criticized.

“Our choice to pursue was, he already had a warrant for aggravated assault — strangulation,” said McPhilamy.

“It did fall within the policy,” McPhilamy said of the pursuit. He acknowledged that police chases are a “challenging conversation” as the public expects criminals to be pursued, but “where do you draw the line” is a question.

While the cause of the Buckhead pursuit may have met MPD’s policy, the document includes many other elements that may come into question. Among them are a call to end the pursuit if the officer is “not familiar with the territory” and the directive to maintain a safe driving distance. McPhilamy says “technically, the bumpers touched” between an MPD car and the suspect car when the latter abruptly stopped.

Mar, the landscape company owner, was surprised to learn his employee was injured by a pursuit based on a warrant. He suggested the police could have tracked the suspect with other methods and cornered him somewhere safer than the narrow Buckhead street.

“I can understand that he was wanted by the cops,” Mar said, “but when they put everybody else in danger to catch somebody that had warrants for his arrest, it’s crazy.”