Portman’s first atrium building to be torn down

As Atlanta celebrates the career of its hometown architect John Portman, one of his earliest and most influential works is about to be demolished.

It is the only public housing project that Portman has ever done. 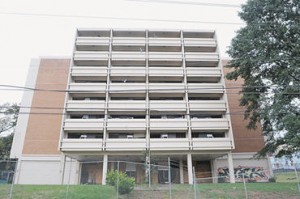 But more importantly, the Antoine Graves building was Portman’s first experience with an atrium — a signature feature that gave Portman international notoriety when the Hyatt Regency Atlanta opened in 1967, two years after Antoine Graves.

In an interview looking over his career, Portman showed little sentimentality about his past work until he began talking about Antoine Graves.

“Save it,” Portman said intently. “That’s selfish. But save it.”

That appears to be an insurmountable task. The Atlanta Housing Authority, which is redeveloping the entire Grady Homes community in partnership with The Integral Group LLC, already has a demolition permit in hand and expects to start demolition within the next couple of months. The redevelopment project already has received all the necessary approval from the U.S. Department of Housing and Urban Development.

Plus Atlanta has a dismal record of preserving its history, including its more modern structures.

“The Antoine Graves building is a very significant building in the career of John Portman,” said Tom Little, an architect who is president and founding member of the DOCOMOMO Georgia chapter, which seeks to preserve modern architecture. “It’s a building that should be looked at very carefully before it’s demolished.”

Longtime Portman associate Mickey Steinberg remembered when they started working on the Antoine Graves project in 1961. They visited several existing senior-citizen high-rises and Portman didn’t like what he saw — people being housed in boxes without air conditioning.

So Portman began to ponder “what we could do to enhance people’s lives and not just put them away in a file cabinet.”

That’s how the Portman atrium came to be. An atrium would give residents the ability to open windows on both sides of their units, providing cross-ventilation. Large fans placed on the roof, which had skylights to let in natural light, helped cool the entire building by creating a breeze.

The atrium also offered other amenities. It created an interior public space as well as the ability for residents to sit on the interior open corridors to visit with their neighbors.

Portman took the atrium feature to another level when he designed the Hyatt where he was able to “blow up” the interior to create one of most dynamic spaces in architecture.

“The ideas are one and the same,” Portman said of the Antoine Graves building and the Hyatt. “It’s the people. I try to respond to that and make a contribution back to their lives. I wanted to do something that was a relief from the congestion of urban life.”

(For the record, the John O’Chiles High Rise in West End was designed by Herbert Millkey and also had an atrium. It opened in 1964, a year before Antoine Graves).

While the Antoine Graves design worked for its time, it doesn’t “make for good quality living for seniors today,” according to Renee Glover, executive director of the Atlanta Housing Authority.

“It’s not that the building doesn’t fit into the context of history. The question is how do you make it work because of its age and its functional obsolescence. It’s in very bad condition.”

The building also was damaged in the tornado 18 months ago, when all the residents were forced to move.

The rooms are “tiny,” and the building has asbestos.

“We are trying to create a wonderful, healthy mixed-income vibrant community,” Glover said. “It really is going to be very exciting.”

As a way to honor Portman, Glover said that “maybe we could have him design something” for the new development.

“It will be today’s reality of senior living rather than the model that was done years ago,” she said.

Portman said he is not one to look back or remodel his past projects, but he had not heard of Glover’s idea to have him design a part of the new development.

He did find it unusual timing that the planned demolition of Antoine Graves will happen as the High Museum of Art will have a major exposition of his work.

“That’s very ironic,” Portman said, and then he repeated his refrain. “Save it.”