City did not err in issuing demolition permit for historic building in King district, but preservationists still hope it can be saved

The Atlanta preservation community was put on high alert this week through social media.

The City of Atlanta had issued a demolition permit for an historic building in the Martin Luther King Jr. Landmark district , and it did not appear that the permit had been issued by going through the proper channels, according to Kyle Kessler at Atlanta Preservation Professionals.

But Anne Torres, a spokeswoman for the city, said the demolition permit was approved by the staff of the Atlanta Urban Design Commission, which is responsible for reviewing applications to tear down historic buildings.

The staff approved the demolition permit in June after an inspection and written findings by Anthony Carter, assistant director of the Office of Buildings, in November 2013.

Carter identified “immediate hazardous conditions to the neighboring properties and the general public.” Torres said Carter declared the structure to be “unsafe” and ordered that it be “demolished.” 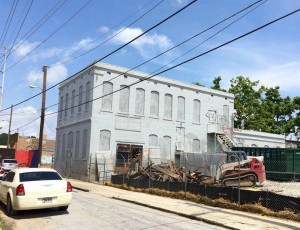 City has given demolition permit for historic building owned by the Atlanta Housing Authority in the King Landmark District (Photo: Terry Kearns)

The building is at 20 Hilliard St. SE, and it is owned by the Atlanta Housing Authority. The preservation community, however, thought a demolition permit had been issued in error without a case being made to the full Urban Design Commission as to why it needed to be torn down.

Terry Kearns, a preservationist and photographer, posted the alert from Kessler on his facebook page, urging all concerned parties to call or write someone at City Hall to put pressure on getting the demolition permit withdrawn.

“The City has been notified of their error in hopes they’ll issue a stop work order,” Kessler wrote in his original alert. “Please make a phone call or send an email to any relevant contacts you have so this mistake doesn’t get swept under the rug! So far they’ve only removed a portion of the roof and some of the interior so it’s not too late to salvage this building.”

When it began hearing from the preservationists upset that the building was going to be torn down, the city quickly tried to correct the “misinformation” that was being spread.

But the preservation community still was concerned that the city had not tried hard enough to save the historic building.

Even though Carter issued his findings in November, the Atlanta Housing Authority waited seven months to apply for a demolition permit, which was signed off on by Urban Design Commission.

“The “immediate hazardous conditions” were reported in November 2013 but a demolition application wasn’t applied for until June 2014,” Kessler wrote in an email following an update from the city. “I don’t see why the City couldn’t have waited a little longer and gone through the normal Certificate of Appropriateness process.”

It is ironic that as the city is about to launch the Atlanta Streetcar to help revitalize the historic King district — to highlight the corridor’s significance in the history of Atlanta and the South — that the very same government would allow further deterioration and erosion of that historic district by issuing a demolition permit for one of the contributing buildings.

And it’s also sad that another public entity — the Atlanta Housing Authority — did not see the value in doing what it could to preserve this piece of the city’s history.

In the seven months between Carter’s letter and the application of the demolition permit, the Atlanta Housing Authority could have been working with any number of preservation leaders and developers to see if there were any opportunities to save the building.

Perhaps either the city or AHA (or both) would be willing to give the preservation community a window of time so it can try to come up with a solution to save the building before it is gone for good.

Previous Article
ARC: Atlanta gains more residents in year than decade; no housing news
Next Article
Craig Menear to be CEO of the Home Depot Nov. 1 when Frank Blake retires