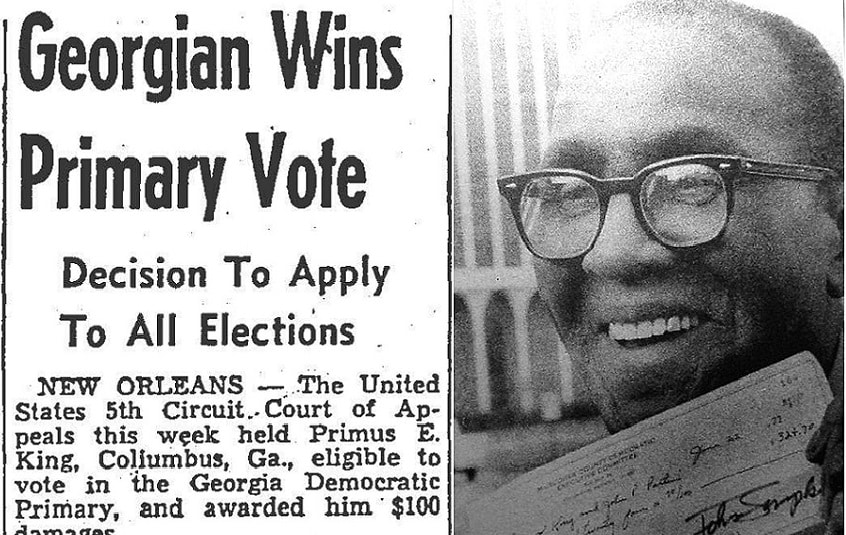 For refusing to give up her seat on a bus in 1955, Alabama’s Rosa Parks was arrested, tried, and fined $10. Her stand, according to the Encyclopedia of Alabama, “triggered a year-long boycott of Montgomery’s buses by the city’s black population” and a federal trial challenging segregation as well as death threats. Parks became an icon in her lifetime, honored for her civil rights work with the Presidential Medal of Freedom and the Congressional Gold Medal, a library and museum that bear her name, and an annual award presented by the Southern Christian Leadership Conference. In 2013, the U.S. Postal Service immortalized Parks on a stamp.

Before Parks, and even before the modern civil rights movement of the 1950s and ‘60s, there was Georgia’s Primus E. King, who also took a stand, prompted a trial, and received death threats.

In the pantheon of civil rights leaders, Primus King has not been accorded the same space as Parks or any of Georgia’s other activists, yet his sacrifice, his steadfastness in the face of violent threats, and the inspiration he provided Georgia’s African American population more than qualify Primus King as worthy. 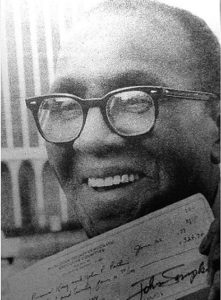 King’s moment of resistance came not on a bus after a long day of work, but on the morning of July 4, 1944, when he attempted to cast a ballot at the Muscogee County Courthouse in Columbus, Georgia. King was a registered voter. He was also African American and attempting to vote in the Democratic Party’s all-white primary election.

While the 14th and 15th amendments to the U.S. Constitution, ratified in 1868 and 1870, respectively, guaranteed African Americans equal protection under the law and the rights of citizenship (including the right to vote), the Jim Crow laws passed across the South in the late 19th century effectively legalized discrimination. African American voters were disenfranchised with poll taxes, literacy tests, and primary elections in which only whites could participate.

At the time of King’s attempt to vote, according to the New Georgia Encyclopedia, “the Democratic Party monopolized political activity in Georgia, as in other southern states, and the party’s primary provided the only occasion in which a voter was offered a choice between candidates seeking offices in state and local government. For this very reason blacks were denied participation in the primaries by the Georgia Democratic Party and its county affiliates.”

King understood the seriousness of his action and its potential consequences, though the idea had not been his own. A group of Columbus civil rights activists led by Dr. Thomas Brewer had devised the plan as a test case (the U.S. Supreme Court had recently found Texas’s white primary unconstitutional, and the July 4, 1944, election in Columbus would “test” this decision in Georgia). Sensing inaction, King volunteered: he would attempt to vote, be denied, then file a lawsuit.

The plan went as predicted. As he entered the courthouse and attempted to cast his vote, white detectives accosted King: “What in the hell are you doin’, n—r?” he later recalled them asking. “I’m going to vote,” King replied. “Ain’t no n—s votin’ here today,” they answered. Outside the courthouse, surrounded by a group of detectives, King “used a level head,” got away without being harmed, and walked down the street to a lawyer’s office to file suit against the Muscogee County Democratic Executive Committee, which was chaired by Jim Chapman. “It was three blocks walking,” King later recalled. “[They] coulda killed me in the street.” 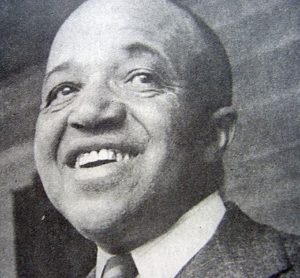 At the lawyer’s office, King was questioned: did he really want to sue the Democratic Party for denying him the right to vote based on his race? Did he know what he was doing? King did, on both counts. The lawsuit was filed.

Before the first trial (there would be two), King received a death threat over the phone: “Are you the n—r that caused so much trouble about this voting around here in the white primary?” “I’m not the n—r, sir, but I’m Primus E. King.” “You must want to be put in the river,” the caller said. King answered: “Well, they’ve put so many negroes in the river for nothing, I’m willing to go in there for something!”

The trial was held in October 1944 in Macon. The atmosphere was tense for the city’s African American population, which was afraid to support King in court. The judge ruled in King’s favor, and the defendants appealed. The second trial took place in April 1946 in New Orleans. Again, the local African American population was reticent to attend. Again, the judged ruled in King’s favor.

King received the verdict in tears. He had done it for his people, he said.

King’s stand moved many of Georgia’s African Americans to further action. Only months after the verdict, more than 116,000 African Americans had already registered to vote, and at some point, a student in Atlanta was inspired to write about him in a school report. The student’s name was Martin Luther King Jr.