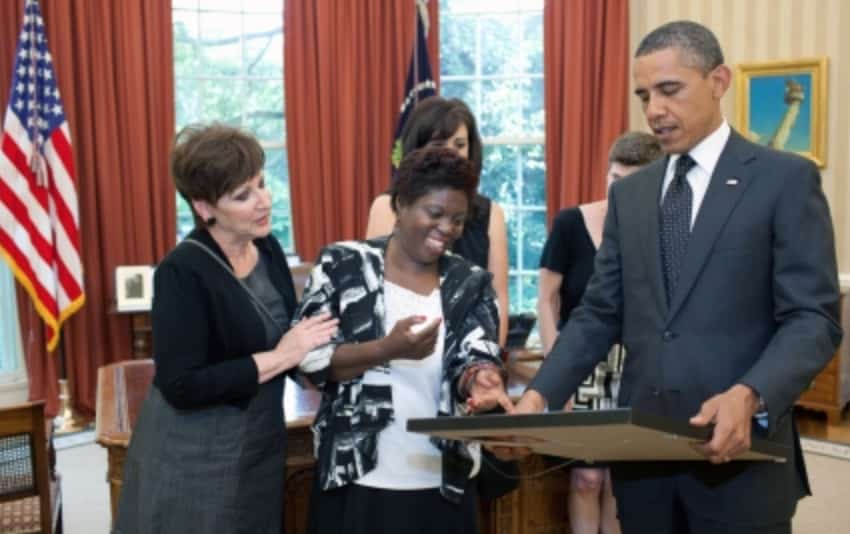 Georgia artist Lois Curtis (center) presents President Obama with a painting to commemorate the 12th anniversary, in 2011 of the Supreme Court’s Olmstead decision. Curtis was one of two women who sued to be released from a state psychiatric hospital after the state determined she could live in a small group home. Credit: whitehouse.gov
Share3
Tweet
Share
Pin
Pocket
WhatsApp
Buffer
Email
Reddit
3 Shares

The Georgia Council on Developmental Disabilities has completed its proposed five-year strategic plan to increase the independence and self-sufficiency of the 12 percent of Georgians who have intellectual and developmental disabilities, plus their family members. 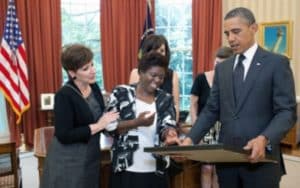 Georgia artist Lois Curtis (center) presents President Obama with a painting to commemorate the 12th anniversary, in 2011, of the Supreme Court’s Olmstead decision. Curtis was one of two women who sued to be released from a state psychiatric hospital after the state determined they could live in a small group home. Credit: whitehouse.gov

The strategic plan establishes five goals for improving opportunities for those with developmental disabilities: Education; employment; formal and informal supports; real communities; self-advocacy. The proposal is now out for public review.

These goals represent the challenges that remain 26 years after President George Bush signed the American Disabilities Act into law.

Less than 12 percent of developmentally disabled Georgians have a bachelors degree, according to a database developed with help from Cornell University. Just over a third are employed. Nearly a quarter live below the 100 percentile poverty level.

The first objective in the council’s proposed strategic plan addresses black male pupils. Specifically, those who are in special education classes and are at risk of being suspended or of dropping out of school.

Of note, this is the council’s No. 1 goal, although just 38 percent of all those diagnosed as developmentally/intellectually disabled are not white and not Hispanic, according to the database, disabilityplanningdata.com.

The council’s goal is to reduce by 10 percent the number of African American males who are in this risk group. The target date is 2021. The intended outputs include moving 75 black males pupils each year into regular classrooms with necessary supports.

In addition, two GNETS are to close each year. GNETS is the Georgia Network for Educational and Therapeutic Support program.

There are 24 GNETS centers in Georgia, according to an operations manual published in 2011 by the Georgia Department of Education. GNETS serving metro Atlanta are located in Atlanta, Lithonia and Smyrna.

The second objective involves expanding opportunities in post-secondary schools by 2021. The specific outcome is to provide 100 students who have intellectual/developmental disabilities with expanded opportunities to attend and be graduated from a college or university with a degree that leads to a career. In addition, families will have access to financial supports to help their child get a post-secondary education.

The council is a federally funded organization with a 27-member board that’s appointed by the governor. The council was formed in 1971 and, according to its website, its purpose is to increase, “opportunities for independence, inclusion, integration, productivity and self-determination.”

On Wednesday, the group celebrated a 1999 victory in the Supreme Court that involved a case from Atlanta. In the Olmstead case, the court ruled against Georgia’s argument that two women with developmental disabilities could be kept in a state psychiatric hospital long after the Department of Human Resources had recommended they be transferred to community care. One litigant, Lois Curtis, met with President Obama in 2011 during the anniversary commemoration.

The council has posted the proposed strategic plan on its website and is seeking responses via an online survey. The deadline to submit a response is July 8.