Proposed sand mine in Wayne County could pump up to 11.5 million gallons of water a day 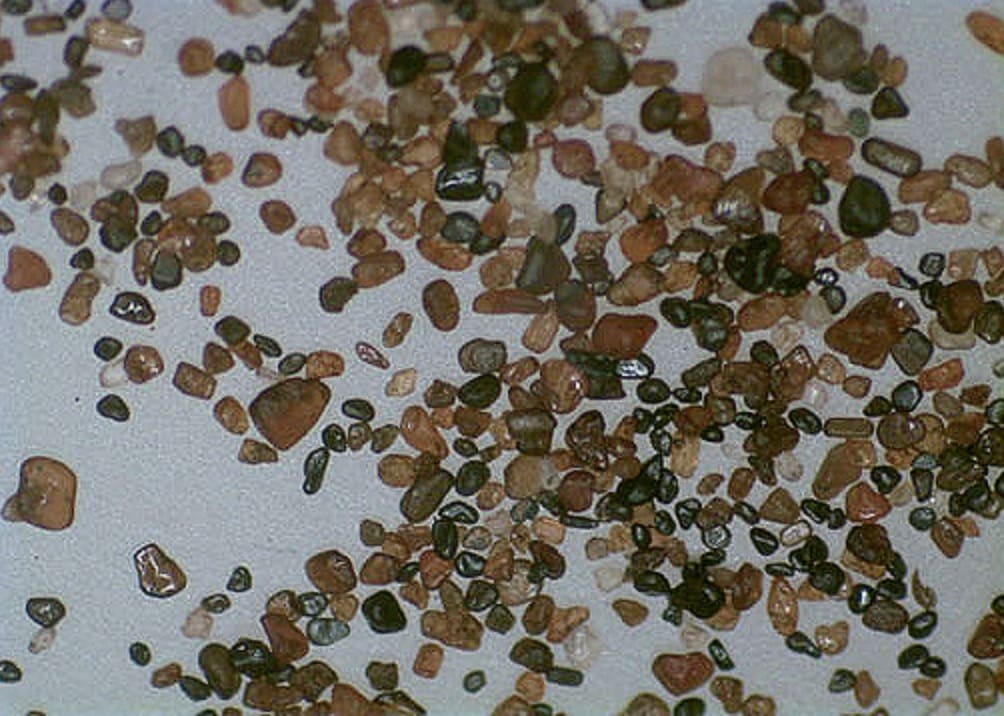 Staurolite is one of three minerals the Chemours Co. wants to mine in Wayne County. Staurolite is used to make Portland cement, to supply alumina and iron, and as an abrasive in sandblasting material. Credit: dep.state.fl.us
Share348
Tweet
Share
Pin
Pocket
WhatsApp
Buffer2
Email
Reddit
350 Shares

A proposed surface mine in Wayne County, near Georgia’s coast, will be allowed to withdraw up to 11.5 million gallons of water a day from the Altamaha River basin, according to draft permits announced June 23 by the Georgia Environmental Protection Division.

The Georgia Environmental Protection Division has issued three draft permits to the Chemours Co., which DuPont spun off in 2015. The public comment period ends July 24. A public hearing may be called if EPD’s director finds enough public interest, according to the draft permits.

This proposed mine is advancing less than three months after Republic Service announced it was abandoning plans to haul coal ash into Wayne County and dump it in the company’s landfill near Jesup. Area residents had waged a vigorous campaign against the proposal to use their county as a dump for a hazardous byproduct of coal-fired power plants.

An economic impact study of the proposed sand mine was conducted in 2014 by the Carl Vinson Institute of Government at the University of Georgia.

Chemours announced June 7 that it now is ranked 482 on the Fortune 500 list of the nation’s largest corporations. Chermours reported $5.5 billion in revenues in 2016.

Chemours portrays its mining process in Wayne County as minimally intrusive. The landowners will harvest timber off the land. Once the mining process is complete, the land is to be restored to its current contour and planted with grasses and trees. 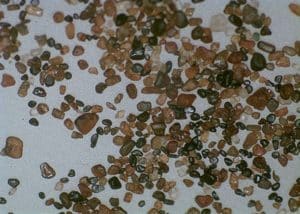 Staurolite is one of three minerals the Chemours Co. wants to mine in Wayne County. Staurolite is used to make Portland cement, to supply alumina and iron, and as an abrasive in sandblasting material. Credit: dep.state.fl.us

The location and extent of the proposed mine are not identified on the website Chemours created for the Wayne County mine. Wayne County tax records indicate that neither DuPont nor Chemours owns land in the county. The identity of the landowner and terms of the deal are not readily available.

The proposed sand mine in Wayne County would employ 60 fulltime employees paying an average of $69,000 a year including a 35 percent benefits factor, according to information DuPont provided before it spun off a unit that became the Chemours Co. Credit: Carl Vinson Institute of Government

Chemours intends to mine for three mineral ores – titanium, zircon and staurolite. The ores are used in industrial applications. Saurolite, for instance, is a valued abrasive used in sandblasting. Titanium is used in coatings of buildings, vehicles and aerospace vehicles, plastics, laminates and paper, according to Chemours.

The draft permits were announced the same day Gov. Nathan Deal announced a $10.5 million investment in the state’s water metering program. Since 2003, Georgia law has required all agriculture agriculture wells and pumps permitted by EPD to have a meter. Over 12,000 meters have been installed, according to a report from the Georgia Soil and Water Conservation Commission.

The funding is coming from One Georgia, the state’s program to spend money collected from the tobacco settlement. Deal named Marjie Dickey to fill the role of Agriculture Water Project Manager at EPD, effective July 1. Dickey grew up on her family’s peach farm in Crawford County and previously served Deal as an advisor on agriculture policy. 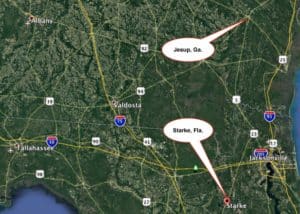 Chemours plans to haul the extracted ore from a mine near Jesup, in Wayne County, to a Chemours facility near Starke, Fla. The material could be hauled by truck or by CSX Corp., which provides service between the two cities, according to the company’s map. Credit: Google Earth, David Pendered