By Maria Saporta
Published in the Atlanta Business Chronicle on April 10, 2015

In looking over her career, Wonya Lucas believes she was destined to become the new president and CEO of Public Broadcasting Atlanta — better known as the entity that oversees WABE-90.1 and Channel 30.

She is succeeding Milton Clipper, who has held that post since 1994.

Lucas is an Atlanta native who went to Morningside Elementary; Northside High’s School for the Performing Arts; Georgia Tech, where she studied engineering; and University of Pennsylvania’s Wharton School of Business, where she got her MBA. 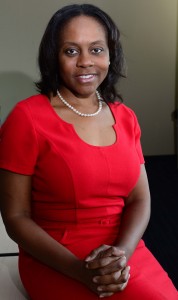 Wonya Lucas is about to become the new CEO of Public Broadcasting Atlanta (Photo: Byron Small of the Atlanta Business Chronicle)

Yet when Lucas decided to take the job as the new CEO of PBA (and the Atlanta Educational Telecommunications Collaborative – AETC), she was following her heart – not her brain.

“My main interest – and always has been – is that I love Atlanta,” Lucas said. “The reason, I think, is that I grew up in a very unique time and place in history. It was the tail end of the civil rights movement. I grew up and got to see so many prominent African American leaders.”

That is an understatement. Lucas actually is the daughter of two such leaders.

Her late father was Bill Lucas, the first African-American general manager in Major League Baseball as the head of the Atlanta Braves from September 1976 to May 1979 when he died at the young age of 43.

Her mother, Rubye Mims Lucas, was a teacher at Morningside Elementary who later became vice president of community relations for Turner Broadcasting System.

Rubye Lucas has held numerous civic posts, including serving as a director of Turner Broadcasting and as chair of the Georgia World Congress Center Authority in  1996. She also has served as president of the William D. Lucas Fund Inc., established in 1979 in honor of her late husband.

During the interview, Wonya Lucas beamed when people talked about her parents and her Atlanta ties. As a divorced mother of two daughters who are seniors (one in college and one in high school), she has kept close friendships from high school and Georgia Tech.

Lucas even was able to buy back the house she used to own in Northwest Atlanta (inside the city limits).

After spending the beginning of her career as an engineer and in the corporate world, Lucas found a home in the media and broadcasting industry, working for eight years at CNN and Turner Broadcasting System before going to the Weather Channel, where she served as executive vice president and general manager.

“It is a blend of everything I love,” Lucas said of her new job with PBA. “I love education, especially math and science. And it’s all about Atlanta. It’s also about my love of media. I love branding as well.”

Interestingly enough, she has worked closely over the years with Teya Ryan, president and CEO of Georgia Public Broadcasting, when they were both at Turner and CNN. “We both come from a similar place,” she said of Ryan.

Over the years, there has been an ebb and flow in the relationship between PBA and GPB – with some periods being marked with intense competition and other periods being more collaborative. There have even been times where there have been talks for both public broadcasting entities to join forces.

“WABE has had a very distinct place in the market,” Lucas said. “I see huge opportunity for both digital and TV, and I see them working in a more integrated fashion. Let’s stay holistic and operationalize it. You can do a story on WABE and on PBA, and you can do anything on digital.”

As for GPB, Lucas said that her hope is that “we would be able to collaborate on major programming ideas.”

But Lucas added that Ryan has a much larger scope – the entire state of Georgia.

“I love having the scope of Atlanta,” Lucas said. “I’m not concerned. We live in a competitive world. As long as we are doing our job listening to our viewers and our listeners, we will be able to determine how we can take this entity to the next level.”

Meanwhile, Lucas said she know that one of her focus areas will be to build up the digital side of PBA – something she has done at nearly every media company she has worked.

“Part of the vision is to continue to focus on the local programming and evolve that,” Lucas said. “My second piece  will be around community involvement.”

Beyond that, she is keeping an open mind – knowing she has a penchant to ask lots of questions.

“I’m really not focused on GPB,” she said. “My focus will be on getting to know the people at PBA, at WABE and digital. I hate it when new people come in and know all the answers.”

In the interest of full disclosure, Maria Saporta is a regular contributor o WABE-90.1-FM.