By Brian Carr, Director of Marketing and Communications, Midtown Alliance

Cities are shaped by complex negotiations between different groups of people and their priorities. And we hold fast to one simple truth about the work our team is doing to improve Midtown Atlanta: People like to be asked for their thoughts on how Midtown can become an exceptional place.

Every three years, Midtown Alliance runs a community survey project to measure attitudes and perceptions about the district, gather input on priorities for the future and rate our work. This is on top of our ongoing work to deliver public open house events for people to weigh in on the specifics about enhancement projects, town hall events that capture big ideas to make Midtown better, and other outlets for dialog with Midtown throughout the year.

Roughly 1,000 days pass between each round of this survey. Enough time for Midtown’s skyline to change, for new improvement projects to come out of the ground, for new people to move in, and for new experiences to create changes in public sentiment that we can study. Our last effort took place in 2019, and yielded nearly 5,000 responses from people who spend time in Midtown. And to say that our city – and our world, for that matter – has changed a lot since 2019 would be an epic understatement.

Much of the survey is dedicated to examining trends across the years. For example, priorities for future transportation investment in Midtown have been moving further away from cars over time: 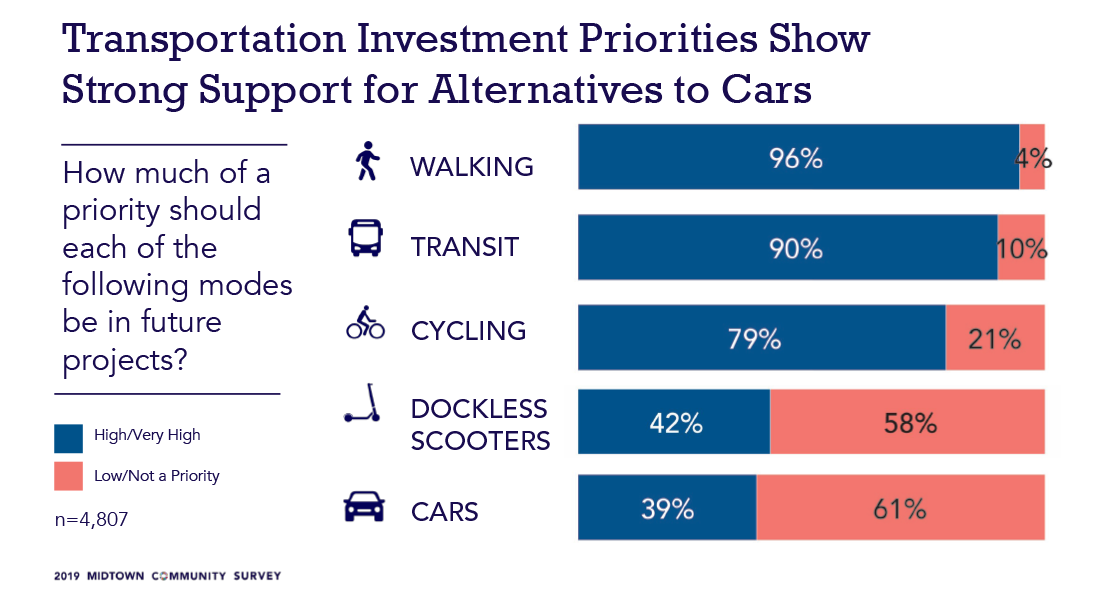 And the perception that Midtown is a family-friendly place has risen steadily: 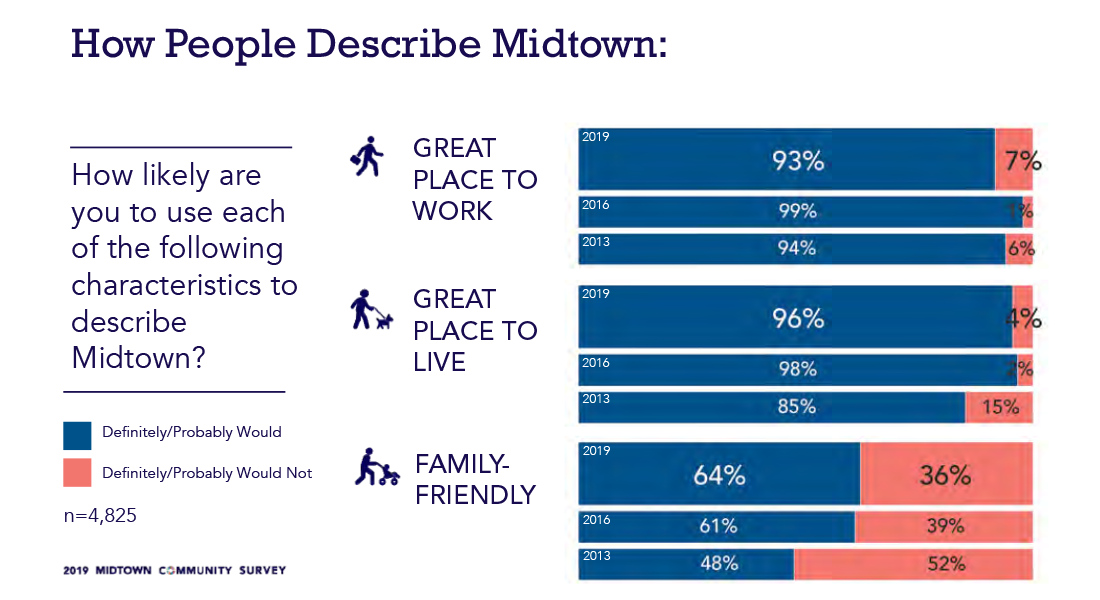 But there’s also room to layer in new questions that lean into the challenges and opportunities of the moment. Beyond the benchmark questions, what do we hope to learn from the 2022 Midtown Community Survey that launches on September 6? We’re curious to ask people who currently have the option to work from home what activities and experiences would draw them to Midtown by choice. We also want to know how important having access to more publicly-accessible open spaces is for people who spend time in Midtown, and what they’d like to do in those spaces.

Arguably, these topics might not have been on our radar three years ago. But our organization, and every other like organization in the place management industry, is pondering these same issues with an eye toward emerging stronger as a resilient, active place where people want to be.

The findings from this project help guide the work of our 50-person staff and influence change. We act on what we learn from the community. Survey results in prior years have helped inform new zoning updates for Midtown in collaboration with our partners at the City of Atlanta. Facts from the last survey helped net a grant from Project for Public Spaces to fund improvements at the North Avenue MARTA station plaza. They have helped confirm priorities for how we plan and deliver new improvements from parks and plazas to street corridors and intersections.

People like to be asked to weigh in and give their two cents. And so, we’re asking everyone who has a relationship to Midtown – as a resident, a worker or a visitor – to take our survey. Make your answers count. Help make Midtown an even better place.