What to do with a rabid cat 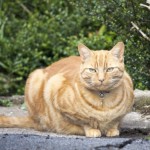 A cat resembling the rabid kitty that attacked my wife.

Until you’ve been chased by an animal that’s foaming at the mouth, you haven’t really experienced the terror of rabies.

Recent reports of potentially rabid animals threatening humans have reminded me of my own encounter with a rabid cat that I trapped with a recycling bin in my DeKalb County backyard just as it leapt to attack me. While it sounds like a freak occurrence, it’s surprisingly common especially during our warmest months, and it’s dead serious.

Last Thursday, a 13-year-old boy strangled a fox that had bit him. He’s receiving precautionary anti-rabies treatment pending the outcome of tests to determine if the animal was rabid. It was the second recorded attack by an animal suspected of having rabies on a human in that county in as many days.

Last week two rabid bats were found in homes on the same street in Gainesville. A northwest Hall County man was bitten by one in late April. On May 15, a rabid fox attacked two Stockbridge residents and a dog.

The danger of encountering a rabid animal in Georgia is year-round. However, those encounters can increase during the summer, when children are out of school, families go on vacation and campers and hikers hit the woods.

“Here’s the thing about rabies: If you get it there’s only about 100 percent chance you’re going to die,” said Gaylord Lopez, managing director of the Georgia Poison Center.

The Georgia Poison Center (1-800-222-1222) is the state’s designated rabies information center. Lopez says each summer the center sees a “slight uptick” in the number of calls about animal bites, roughly 100 additional calls each month.

Considering the all-but-universal mortality rate for humans who contract rabies, it can be difficult to assess the risk on a case-by-case basis. Not all animals that bite are rabid, and not all are equally dangerous as carriers of the disease, experts says.

Bats are high on the list, as are raccoons, skunks and foxes, according to the Humane Society of the United States. Rodents are far less likely to transmit rabies to humans. Domesticated dogs and cats are somewhere in the middle, Lopez said.

The disease is transmitted from the saliva of an infected animal through a bite or contact with an open wound or the mucous membrane of another. The virus cannot survive in open air. If the saliva dries, the virus dies.

“One of the problems with cats is they are constantly grooming themselves,” Lopez said.

That raises the danger of transmitting rabies through a scratch from a cat than from other infected animals.

On a full moon in July 2003, my wife was taking out the trash in the carport when she heard mewing on the unlit front stoop. Our kids had been begging us for a pet, and she thought one had found us. She approached the sound and as soon as she could make out the yellow cat in the dim light, it hissed and pounced at her upper body.

She caught it and pushed it away, its claws tearing deep scratches into her hands. Screaming, she ran through the carport and into our house, the crazed kitty chasing her.

I went outside to see what was the matter. In the far corner of our dimly lit carport I saw a moon-faced cat with half closed eyes, lurching, hissing and staring at me. When I turned to ask Michelle what had happened, the cat was gone.

We called animal control. “You need to catch that cat,” the officer said. “It might be rabid.” 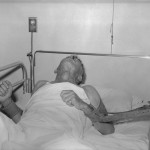 We were tired, it was late, and the thought of trying to find a nasty animal in our dark wooded backyard seemed an impossible quest. But even worse would be not to try. If the cat escaped, we wouldn’t be able to determine what Michelle’s treatment should be. A quick look at the CDC website showed us what we might be dealing with. Rabies infects the central nervous system, attacking the brain and causing death; once you experience symptoms, you will die within a couple of days.

We set out to find the slobbery feline without thinking that we might be putting ourselves in further danger.

We grabbed flashlights, and I didn’t bother changing out of the thin dashiki robe my dad had brought me from Egypt. I put on flip-flops and grabbed the closest container big enough to hold a cat: a translucent, stackable, plastic recycle bin. My wife and I then headed out into our backyard. Previous trapping experience: zero.

“Here kitty, kitty,” I called out as I walked toward the creek. “Here you nasty little kitty.”

Michelle swept her flashlight behind me, and inhaled sharply when she spotted the cat, crouched in a circle of trees, a few feet sideways from me. I turned, and in the full moonlight, I saw the yellow cat with the half-opened eyes.

I walked slowly, slowly toward the cat. As I got closer I began to circle the animal to approach it from behind. First its eyes, appearing fixed on my every move, followed me. Then it turned completely around. I moved closer, closer, slowly raising the inverted bin.

The cat leapt straight at me. I slammed the bin on it in mid-flight, pinning it on the ground. The only part of the animal sticking out was a forepaw, its claws outstretched. I pressed down on the lip of the bin, and the cat howled and pulled its paw inside.

It scrambled and bumped inside, trying to get out. We stacked concrete blocks and bricks around the sides and on top to prevent escape.

Perhaps it was the full moon, but animal control was busy and couldn’t get to us right away. Near the trapped feline, I lay on a reclining lawn chair, hunkered under a sheet, with two tiki torches doing little to keep the bugs off me. An occasional howl from the trapped cat, followed by a thud as it tried to knock over the box, interrupted my disturbed dreams.

Around 3 a.m. an animal control officer came to our house and expertly transferred the cat into a cage. His bright police flashlight revealed the cat’s wet face, glazed eyes and dripping mouth.

“Normally we quarantine cats that might be rabid, but I’m going to recommend this cat be put down right away,” the officer said.

Michelle sought treatment that night at the emergency room, where she got a tetanus shot and was told to contact an infectious disease doctor for help in the morning. The same day, we got a call from the county public health. The cat was rabid.

The nurse who worked with the infectious disease doctor didn’t mince words. “This is really going to hurt,” she said, injecting a giant syringe of gamma globulin near the wounds before Michelle passed out. In the following five weeks, Michelle received painful injections that caused migraines. But it beat the alternative. 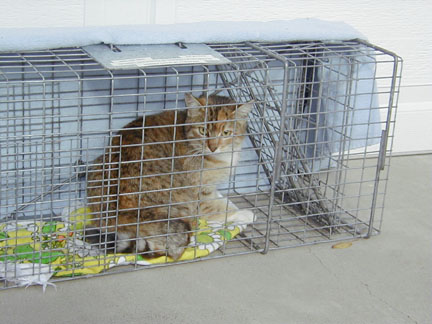 Feral cat sterilized through a trap-neuter-return program. Its ear is notched (Wikimedia Commons)

We never learned whether the rabid cat was feral or belonged to someone, but recently found out that DeKalb County is deciding whether to continue a program that has greatly reduced the number of unvaccinated feral cats.

Feral Freedom is a pilot program started in 2011 and funded by Best Friends Animal Society, and it provides free sterilization and rabies vaccination for outdoor or “community cats” that are trapped by field officers or citizens. The “trap-neuter-release,” or TNR, program had dropped the euthanasia rate for cats from over 70 percent to 26 percent. If you see a cat missing the top triangle of its left ear, it has been trapped, neutered and released—unlikely to spread disease or be a nuisance.

Here’s hoping DeKalb County continues this valuable, cost-saving public health measure and that TNR programs catch on across Atlanta and our state.

“The feral cat question is a much wider issue than just within the DeKalb County or the Atlanta metro area,” noted Catharine Tipton, a member of DeKalb Animal Services and Enforcement (DASE) Advisory Board who has been involved with animal welfare issues for more than 40 years.

“Many county-run shelters and independent humane and rescue organizations in this country and indeed all over the world deal with the feral and stray cat issue. It is fairly obvious that just trapping and killing the cats doesn’t get rid of the problem; the humane way is to institute TNR programs which effectively reduce the number of cats.”

In a dense area like metro Atlanta, it behooves us to always look out for one another. I sometimes wonder what might have happened if we had never bothered to go after that cat. We could have washed and disinfected Michelle’s hands and never went to the doctor.

But after catching the cat, and in the interest of public health, Michelle posted a note on our neighborhood blog describing the incident. A woman came by our house to thank us, because the same cat scratched her earlier the same day, and thanks to our alert, she was being treated for rabies too.

So ended a terrifying chapter of our mostly quiet suburban Atlanta life. It’s probably inappropriate to inject some humor into this profoundly unfunny tale, but here’s what we learned the hard way that summer night: When it comes to rabies and its potential carriers, it’s not a good idea to pussyfoot around.

Contributing: Michelle Hiskey. Ben Smith can be reached at benzmyth@gmail.com.