Railroad proposes another antenna next to historic Cabbagetown mill

The proposed site of a 70-foot-tall antenna tower in CSX's Hulsey Yard is shown with a red dot on this aerial photo from a historic resources impact report from consultant HDR. Cabbagetown's historic Fulton Cotton Mill Lofts is the building complex to the upper right. The green space inside the J-shaped road at far upper right is where a taller antenna tower was proposed earlier this year.

Months after backing off a plan for a cell tower looming over Oakland Cemetery and Cabbagetown, a railroad company is proposing another antenna about 1,100 feet away, next to the historic Fulton Cotton Mill Lofts.

The 70-foot-tall antenna tower would rise within CSX’s Hulsey Yard freight facility. The site is about 220 feet from the historic mill and adjacent to the Cabbagetown and Martin Luther King Jr. national historic districts. But, just like the previous cell tower plan, a CSX consultant says the antenna will have “no adverse impacts” on historic sites. And just like that previous plan, some preservationists have their doubts. 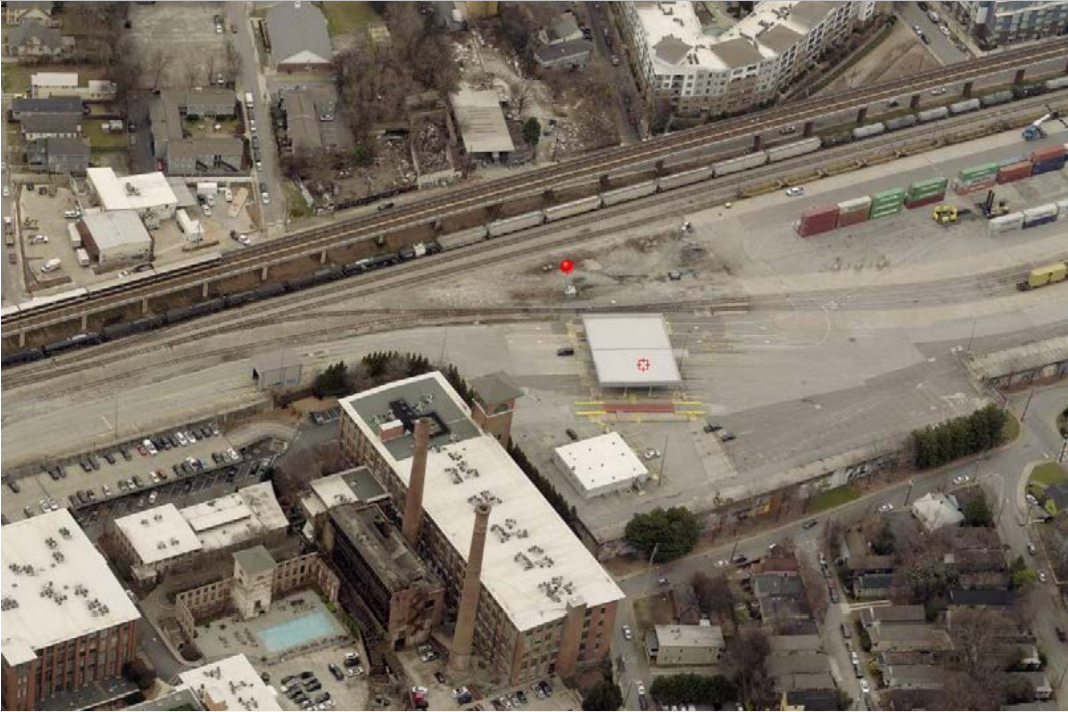 Another view of the antenna site, marked with a red dot, from HDR’s report. Cabbagetown and the Fulton Cotton Mill Lofts are at the bottom, and Decatur Street in the Old Fourth Ward is at the top.

“What we’re very hopeful for is, this will not in any way conflict or obstruct the historic fabric within which it finds itself being used,” said David Yoakley Mitchell, executive director of the Atlanta Preservation Center (APC), expressing concern that the antenna “will affect the visuals of several historic communities.”

The historic impact report from consultant HDR was dated Aug. 16 — the same day APC and other preservationist groups were contacted about it, leaving them listed as providing no responses. The City’s Historic Preservation Studio is one of those contacts and declined comment, saying its review is still underway.

The new plan does have some significant differences from the previous concept, including a site deeper within the railroad right of way and a height less than half that of the cell tower.

In April, a company called CitySwitch proposed the 165-foot-tall cell tower on a piece of CSX land on Boulevard, right next to the cemetery and the mill. The plan appeared to include an antenna for CSX’s own use as well as antenna space rented to cell phone companies. CitySwitch partners with CSX and Norfolk Southern Corp. to erect such towers on railroad right of ways. Its website previously offered dozens of tower sites in Atlanta and Georgia, but that map was removed following SaportaReport’s coverage.

The cell tower plan received withering criticism from many experts and the state’s historic preservation office, leading CitySwitch to back off and examine “alternatives.”

The new Hulsey Yard antenna plan does not involve CitySwitch or cell phone services. It is “for rail operations communications only,” according to CSX spokesperson Sheriee Bowman. Known as a “repeater,” the antenna will  “improve communication with train crews during yard operations,” said Bowman.

CSX and HDR would not clarify whether the new antenna is a replacement for the one proposed on the earlier cell tower plan or is in addition to it. Bowman referred to the new antenna as “replacing” one already in Hulsey Yard, while the HDR report refers to it as an “addition” and “introduction” of a new facility. 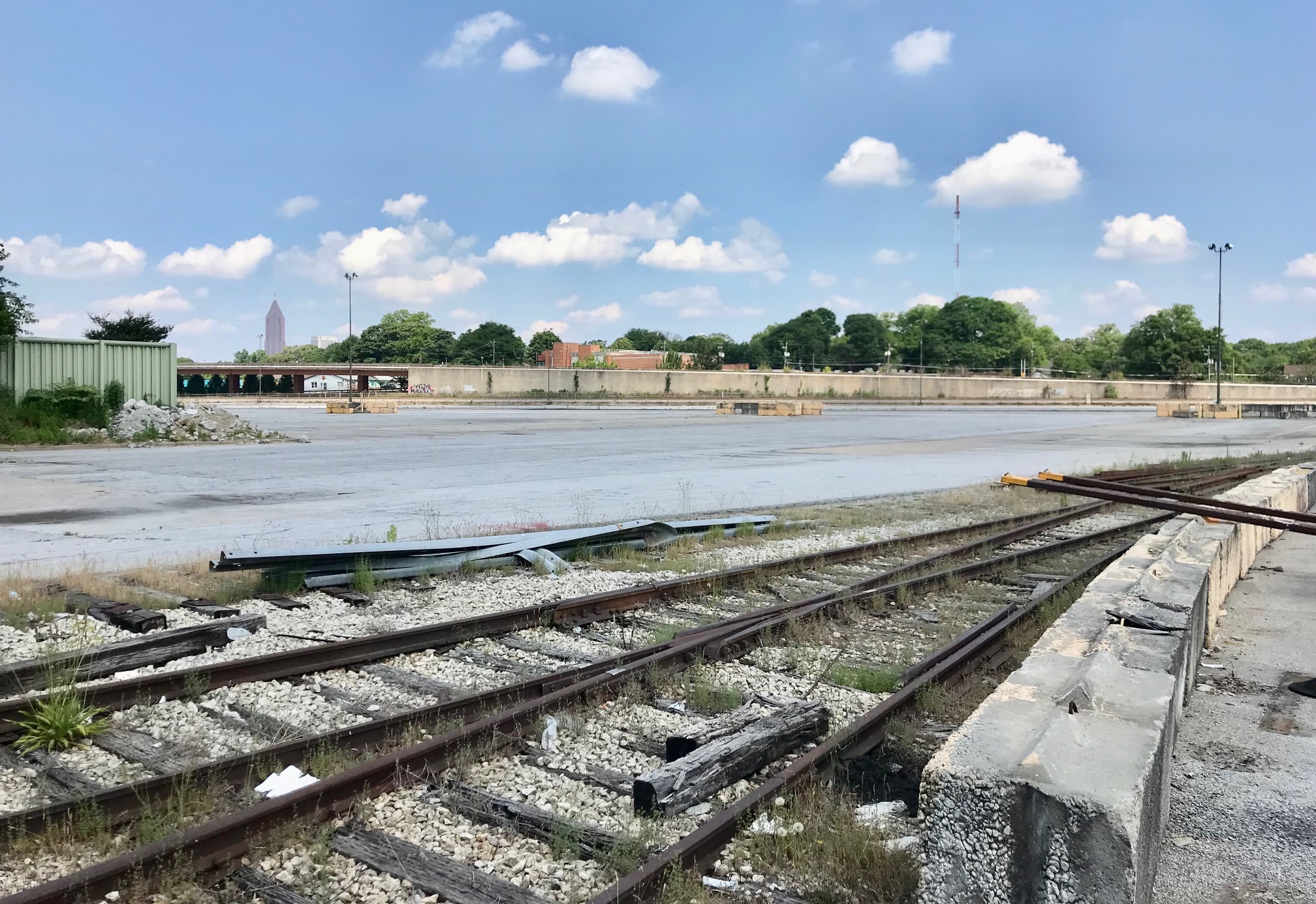 A view inside Hulsey Yard from May 2019, when CSX temporarily stopped using it. (Photo by Kelly Jordan)

The earlier cell tower site was on the west of the 1881 mill complex, while the new antenna site is to the east, within the yard’s railroad tracks and next to a maintenance structure. The antenna itself would be 10 feet tall and sit atop a 60-foot pole. The HDR report says it would have “a similar visual impact to a telephone pole,” and notes the area is surrounded by walls, buildings and vegetation that could block the view. The yard already has a number of tall light poles.

Mitchell at the APC suggested that railroad antennas could be incorporated into new buildings in the quickly redeveloping area around the yard, which stretches roughly three-quarters of a mile between Cabbagetown and Reynoldstown/Inman Park. The yard itself has been the subject of redevelopment concerns and ideas in recent years. In 2019, CSX stopped using it for nearly a year, leading surrounding neighborhoods to commission a “master plan” for high-density redevelopment into a new community. But in 2020, CSX resumed freight use.