Ted Schwartz, a real estate professional for more than 25 years, is joining the boutique firm of Carter Hill Advisors, a Black-owned company founded by Delmont “Del” A. Early III. Earlier this week, he resigned from the Joel & Granot firm, where he had been for seven years.

The story of this late-in-career transition is rooted in Schwartz’s experience in the Leadership Atlanta class of 2020. Although he had been concerned about the lack of diversity in the real estate business for years, Schwartz was prompted to do something about it when he was challenged by fellow classmate, Brian Tolleson, about why he was working in a firm with no racial diversity.

“My experience with Leadership Atlanta changed my life,” said Schwartz, who sat down for a recent interview with Early, his new partner.

Schwartz first got to know Early in 2012. That’s when Early joined Ackerman & Co., where Schwartz had worked for 10 years. They sat across the hall from each other, and they were both office tenant representatives.

“We developed a friendship,” Schwartz said. 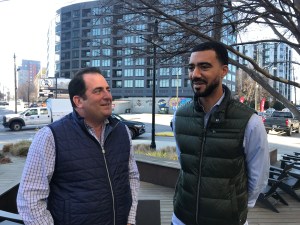 “I viewed Ted as someone who does what I do, but was more senior,” Early chimed in. “I could go to Ted for advice.”

After Schwartz left Ackerman to join Joel & Granot, he stayed in touch with Early.

“I tried to get Del to join Joel & Granot, but Del said he was going to CBRE,” Schwartz said.

After nearly a couple of years with CBRE, Early decided to venture out on his own — following his grandfather’s example.

He started Carter Hill Advisors last fall — a firm named after the street where his grandfather Charles Spears — lived in Montgomery.

“My grandfather’s house was bombed in the mid-1960s,” said Early, who has a photo of Martin Luther King Jr. with his maternal grandfather in Montgomery. “I grew up at a young age seeing a man who never had had a boss. He was independent. He was doing things back then that Black men didn’t usually do.”

Spears owned an agency that leased caps and gowns, and he owned some properties including a laundromat. “I would collect change from washers and dryers,” Early said.

All his younger life, Early had been one of the few, if not the only Black person in the room. That changed when he went to Morehouse College and later to Howard University for law school. But he was not drawn to becoming a lawyer, and he found that real estate was a better fit for him.

“I enjoy helping business people solve real estate problems,” Early said. “I just wanted to go out on my own. It was something I had thought about doing for years, but the timing presented itself. Now is the time to do it.”

Schwartz, 54, also was intrigued by the possibility of joining Carter Hill.

“We started talking,” Schwartz said. “I knew Del is the kind of guy I wanted to work with.”

Interestingly enough, Schwartz who grew up in Miami Beach also had been heavily influenced by his maternal grandfather, Max Boderman.

“My grandfather is the one who shaped me,” Schwartz said. “I was at my grandparents’ home all the time. He was in real estate, and he was loved by everybody.”

Schwartz eventually moved to Atlanta, first working in banking and the travel business before entering the real estate business.

Over the years he developed a specialty doing leases in the Georgia 400 corridor and in suburban markets. Even before Leadership Atlanta, Schwartz was aware of the lack of diversity in the real estate industry.

“I was already ‘woke,’” Schwartz said. “I just needed a kick in the pants. I could have done this years ago, but I wanted to find the right partner. Leadership Atlanta taught me what the future of Atlanta was all about.”

Schwartz, who is joining Carter Hill as a senior partner, also brought along his colleague, Renée Rosenheck, which adds to the diversity of the firm.

“Making a move this late in one’s career is unusual,” Schwartz said. “It’s my last move. I’ve always been looking for the right, equal partner. I love mentorship. This is my opportunity to really create something where I can mentor young leaders.”

Early said the vision for Carter Hill is to be a boutique firm with experienced professionals focused on responding to the needs of their clients — be they large or small. The clients will get senior leadership experience regardless of their size.

“Our culture is to be inclusive — looking a what different people can bring to the table,” Early said. “The future of the industry is to know the diversity of the community. We would like to truly be a representation of the city.”

Early, 44, added that he would like to “pull up young talent” and “have an impact on what the industry looks like years from now.”

As the founder of a Black-owned firm, Early understands the significance of Schwartz leaving an established firm to join a start-up.

“It takes a secure white man to go work for a Black-owned company,” Early said. “Ted is a guy of conviction. I don’t think a lot of people would do what Ted is doing. He doesn’t need to come to Carter Hill. Ted could go anywhere, but he chose to come to Carter Hill because he wanted to do something impactful and special. I think that’s courageous.”

Editor’s note: The author of this article was in Schwartz’s Leadership Atlanta class.