By Maria Saporta
As published in the Atlanta Business Chronicle on July 21, 2017

The Civic Center property may soon be back in play.

Atlanta Mayor Kasim Reed is exploring “reactivating” the 18-acre Civic Center site and possibly putting it back on the market.

“We will have an announcement about the future of the Civic Center by the end of this month,” Reed told Atlanta Business Chronicle on July 19. A proposal by Houston developer Weingarten Realty to redevelop the site as a $298 million mixed-used project collapsed last October.

Reed said he is exploring several options including a public-private joint venture with the Atlanta Housing Authority to build a significant affordable workforce housing development on the site. 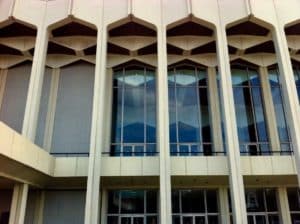 The city is facing a loss of about 15,000 affordable housing units, partly due to Section 8 properties going off the market. Reed said he is spending his final months in office trying to make sure Atlanta is a city where everyone can live, including those who can’t afford the market rate for housing.

Reed said he currently is having “conversations” with AHA on the possibility of creating a significant affordable housing development on the Civic Center site, one of the largest land holdings the city currently owns.

“There’s a lot of energy around it,” Reed said, adding that he’s also exploring several other concepts that could be done in tandem with AHA.

In a telephone interview, Catherine Buell, the AHA’s president and CEO, confirmed AHA’s conversations with the mayor and the city’s development arm, Invest Atlanta.

“Our team is excited about the possibility,” Buell said. “We appreciate the fact that the city and Invest Atlanta would bring us into the discussion. That’s huge for us.”

But Buell added the partnership is still being defined. “We haven’t finalized the structure of the deal,” she said.

There are multiple options.

The city and AHA could be co-investment partners, and a city-AHA joint venture could work with a private investor to redevelop the site. The AHA could buy the entire property. The city could retain ownership of part of the property, sell part of it to AHA and sell another part of it to a developer. Or the city could continue to own the entire site and contract with AHA to develop affordable housing on the land.

“All of the above are possible,” Buell said. Asked whether she thought the mayor would move forward on a Civic Center deal, Buell said she thought he would.

Meanwhile, Buell said AHA would like to develop affordable housing throughout Atlanta by partnering with other public entities such as Invest Atlanta, the Atlanta BeltLine and Atlanta Public Schools.

“We are looking for investment opportunities,” she said. “We understand we need to have our reserves to be allocated.” AHA, through the U.S. Department of Housing and Urban Development, has about $130 million in reserves that could be used for land acquisition and development.

Also, for the first time, the mayor said he was considering keeping the Boisfeuillet Jones Atlanta Civic Center, a theater that opened in 1967 and seats 4,600. As a 50-year-old building, it could qualify as a historic structure.

“People really miss the Civic Center as a public performance hall,” Reed said. “I’m trying to process all of that.”

Reed spoke to Atlanta Business Chronicle following his remarks at a BisNow breakfast held at The Ritz-Carlton, Atlanta downtown. The event focused on developments in the Midtown and downtown submarkets. 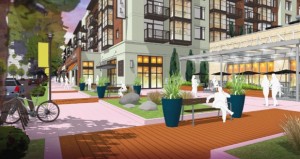 Developing the Civic Center property has been an on-again, off-again saga for the City of Atlanta dating back to 1986 when Ackerman & Co. first got the rights to develop the site. But those plans never materialized.

Then in October 2014, the city announced plans to put the property out for bid. The city received about eight bids, but in January 2015 Reed expressed disappointment that the offers to buy the property were below the city’s expectations.

Finally, in September 2015, the city selected Houston-based Weingarten Realty as the buyer. Weingarten offered to buy the property for $30 million and develop an urban mixed-use project with apartments, retail offices and green space.

Despite unveiling development plans for the project, Weingarten and the city negotiations on the deal stalled. The mayor announced on Oct. 26, 2016, that deal to sell the Civic Center was off the table. The company said it had reached an “impasse” with the city, adding “It’s a good site with solid supermarket interest but the company needed more time to make an adequately informed decision.”

The first was the proximity of the Peachtree-Pine homeless shelter, a place that accepted almost everyone off the street. The shelter is just two or three blocks away from the Civic Center property, and several real estate leaders had said it depressed the land values of surrounding property.

In June, a settlement was reached among various parties to close the shelter by the end of the year, and Central Atlanta Progress would own the building at the corner of Peachtree and Pine streets.

After a meeting of the Atlanta Committee for Progress on June 23, Reed was asked whether the closing of the shelter would increase the value of the Civic Center property.

“I think it does,” Reed said, adding he was thinking about reopening the Civic Center bid, and he would make a decision on how to proceed in July. “The people at Weingarten should have closed this transaction.” 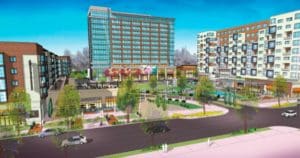 Weingarten executive Bill Coats did not respond to several requests for comment.

Reed also expressed appreciation for the settlement to close the downtown shelter.

During the July 19 BisNow presentation, A.J. Robinson, president of Central Atlanta Progress, mentioned the shelter and the Civic Center as addressing a “couple of pieces of the puzzle” when it comes to downtown development.

“The shelter is going to close, and a medium-term project is the Civic Center with its 18 acres of urban land,” Robinson said. “Someone is going to develop that either in this (mayoral) administration or the next.”

Now the city may be taking a different approach, Mayor Reed said July 19. It might be possible for the redevelopment to remove the tank and create a storm-water feature similar to the Historic Fourth Ward park.

“It’s on the table,” Reed said. “Anything we do around the Civic Center, (the Department of) Watershed will be involved.” 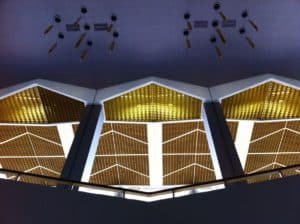 Civic Center with lights on (Photo by Kelly Jordan)

During his BisNow presentation, Reed highlighted Atlanta’s need for affordable workforce housing — making a direct plea to the developers in the room.

“The one ask I would make is — the challenge in the next 10 years is affordability and mobility,” said Reed, mentioning the development popularity of the city, including the Atlanta Beltline. “Everything is going to be causing the city to become more expensive.”

Working in Atlanta’s favor is that the city covers 131 square miles, and there’s lots of property that can be developed.

Saying he wanted to engage with landowners “on a different dynamic way to make sure Atlanta is for everyone,” Reed then recited a chant about how other cities are no longer affordable.

“New York is gone. London is gone. San Francisco is gone. Chicago is gone. Los Angeles is gone,” Reed said. “I’m for you all making a profit. You are about to have an amazing run. Just take some folks along with you.”