A bond was formed at first sight.

“We hit it off on a personal and professional level,” McKnight said in an interview on Friday. “We made an immediate connection and developed a special relationship.”

McKnight will be one of the speakers who will celebrate Young Saturday evening during his 90th birthday gala. It’s such an honor for McKnight that he has invited his mother to come to the gala from out of town.

And McKnight will come bearing gifts.

McKnight will announce a $250,000 gift to the Andrew Young Foundation Saturday night — bringing Google’s support of Young to a total of $400,000. And that’s just the beginning.

Since being introduced to Young by media strategist Bob Hope, McKnight has become a devout follower and supporter of the former U.S. Ambassador to the United Nations and civil rights legend.

“This is really a long-term partnership. We plan to give recurring gifts each year,” said McKnight, estimating those gifts will be at least $250,000 a year. “There’s so much we can do together.” 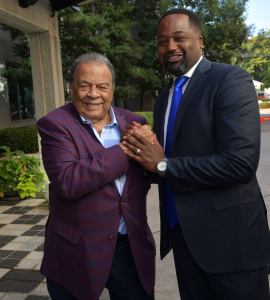 Former Atlanta Mayor Andrew Young and Google’s Reggie McKnight formed a special bond during a two-day vaccination rally in Fairburn in the fall of 2021 (Special: Google.)

Last fall, Young was the star attraction at a two-day vaccine rally held at Google’s production facility in Fairburn for the company’s employees and extended family.

“After those two days, our vaccine rate went up by 30 percent,” said McKnight, adding the best part was riding around town each day with Young — when the two became even closer. Then they spent four hours together in Young’s office — taping a video conversation and sharing personal stories. That will be posted online when “the video folks” have finished editing the recording.

“It was such a beautiful day,” McKnight said. “He gave me the greatest compliment in my life.”

Young told him that Martin Luther King Jr. told his civil rights colleagues that most of them would not live beyond 40. (MLK was assassinated when he was only 39.) Whoever lives beyond 40 will need to carry on the work of feeding the hungry, clothing the naked and sheltering the homeless.

“He gave me the greatest compliment in my life,” McKnight said. After telling McKnight he was now one of his protégés, Young passed on King’s message of feeding the hungry and clothing the naked to McKnight.

“You are doing that through Google,” Young told McKnight. “It literally almost brought me to tears.”

For McKnight, his relationship with Young symbolizes the relationship between Google and Atlanta. The multinational technology company recently has made the Atlanta market a major operating hub.

“It is a unique city for us,” said McKnight, ticking off Google’s presence in the metro area. “We have a 19-story tower in Midtown with 700 employees. We have a $1 billion data center in Douglasville. We have the Fairburn production facility where we produce hardware. We consider Atlanta to be one of our new hubs.” 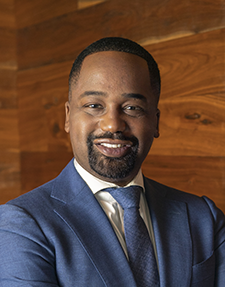 One of the main attractions for Google in Atlanta is its diverse and talented workforce — helping the company meet its racial equity commitments. Google already has invested $11 million in Atlanta’s historically black colleges and universities where the company can draw on the talent that’s here.

Google also has committed to spend $2.5 billion in expanding its supplier diversity globally.

“We’re putting our money where our mouth is. It is an exciting time for us,” McKnight said, mentioning that Google’s motto is “building better for everyone.” “I can’t think of a better person who represents the possibility of hope than Andrew Young.”

McKnight, who has an international role for Google, is thrilled to be based in Atlanta after being in Washington, D.C. for 13 years.

“I love every part of Atlanta,” said McKnight, who has listened to Young’s history lesson of how “the Atlanta Way” helped the business and civic communities resolve racial differences nonviolently. “I think Google is positioned to carry that way forward. It’s the right thing to do. That legacy is so strong.”

McKnight could not be more thankful to be in Atlanta and be able to partner with Young.

“This is truly a blessing — to have a friendship with one of the greatest peacemakers of all time,” McKnight said. “Peace is needed now more than ever — peace and reconciliation. I really believe it was written for this time to be celebrating this man’s 90th birthday. Who better to look to as a North Star? We will follow the path. His message is so needed right now. It’s divine intervention that we are celebrating Andrew Young’s birthday this weekend.”