For a year of my life, I worked for William Worthy, an amazingly independent journalist who knew no bounds.

He became internationally known for sneaking into China in 1956. He also traveled to Cuba without a passport to interview Fidel Castro, and he went to the Soviet Union in the middle of the Cold War to interview Communist leaders.

All those adventures didn’t make him a popular journalist with the U.S. State Department, which refused to renew his passport unless he limited his travel – a ruling he challenged all the way to the U.S. Supreme Court.

Worthy, 92, passed away on May 4 in Brewster, Mass. from complications of Alzheimer’s disease – news that caught me off guard.

I had just been talking about him to Penny McPhee, president of the Arthur M. Blank Family Foundation, when we were on the recent Philadelphia LINK trip looking at the role that “anchor institutions” could play in revitalizing urban communities. (But more on that below). 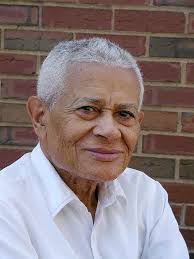 When I was working for William Worthy – during the academic year of 1976-1977, he was running a new “Afro-American Journalism” program at Boston University’s School of Communications. It was a special Master’s degree to help prepare more African-Americans to enter management positions in our nation’s newsrooms — then (and still) held overwhelmingly by white editors and publishers.

As his 25-hour-a-week executive assistant, I was able to attend all the classes I wanted — including going with his students across the Charles River to visit with Harvard University’s Nieman Fellows.

Worthy, a Boston native who had attended the Boston Latin School and who had been a Nieman Fellow, could open doors all over town. It was through Worthy and his classes that I realized the role that the growth of suburbs and demise of cities had played in the concentration of poverty and blacks in urban America.

Worthy had just published his book: “The Rape of Our Neighborhoods: And How Communities Are Resisting Take-overs by Colleges, Hospitals, Churches, Businesses, and Public Agencies” – William Morrow and Company Inc. 1976.

The book was about the evils of “institutional expansionism.”

The genesis of the book came from his own experiences of when he was living in a New York apartment building. He and a small group of tenants had fought a five-year battle to prevent their building from being torn down to make way for a 27-space parking lot for Columbus Hospital employees.

In Boston, Worthy saw similar takeovers and battles being played out with multiple institutions — the Christian Science Church and the countless universities that were busy acquiring property as they expanded into surrounding neighborhoods.

During my year working with him, in addition to waging battles against abstract institutions, Worthy also was immersed in a university-wide campaign to overthrow the president of Boston University, John Silber.

It was a popular and populist endeavor. A student newspaper had published a tabloid-sized front page stating: “Silber Must Go.”

Two-thirds of the faculty and two-thirds of Boston University’s deans publicly called on BU’s board of trustees to fire Silber. I remember Worthy’s excitement and anticipation on the morning of that trustees meetings. As one of the ringleaders pushing for Silber’s ouster, Worthy was sure of a win.

But then he got word. The board of trustees was one vote shy of firing Silber. Many of the trustees in the minority resigned on the spot. Virtually all the deans who had called for Silber’s ouster were gone within a year (including one of my mentors, John Wicklein, the dean of the School of Public Communications).

By that time, I had decided to come home to Atlanta to get a Masters in urban studies from Georgia State University (holding what I thought was a nearly worthless Bachelor’s degree in journalism from BU).

In Philadelphia, the delegation of 111 metro Atlanta leaders on the LINK trip heard how the city’s “anchor institutions” — the University of Pennsylvania, Drexel University and so many others — were working with their surrounding communities to help revitalize them in multiple ways. They could buy their supplies from companies in the community; they could hire their employees from next door; they could engage their staff and students in the elementary and middle schools; they could invest in rehabilitating buildings for residents as a way to improve the areas around the schools.

Stronger neighborhoods would lead to stronger institutions and vice versa. 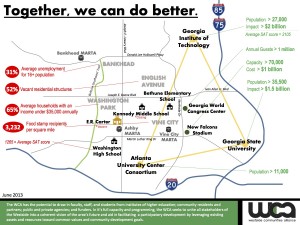 It is a formula that the Blank Foundation is hoping can be applied here in Atlanta, especially on the Westside around the new Atlanta Falcons stadium that is supposed to open in 2017.

It’s a conversation that is just beginning to take hold in Atlanta. At last week’s Northwest Community Alliance meeting, Jacqueline Royster, dean of Georgia Tech’s Ivan Allen College of Liberal Arts, presented a flier: “Together we can do better.”

It showed a map of the triangle formed by three academic institutional centers — Georgia Tech, Georgia State University and the Atlanta University Center — and how they could be the anchors for the revitalization of Atlanta’s core (the new Falcons stadium happens to be strategically located in the bulls-eye).

So I asked Penny McPhee, what has changed since the 1970s when William Worthy was talking about the evils of “institutional expansionism” to today when we are looking towards our institutions to take a more active role in uplifting our communities?

She answered with great wisdom. The relationship between our communities and our institutions have been maturing over the decades. The more enlightened institutions and communities have learned, not to work at cross purposes, but how to benefit each other.

Having lost touch with Bill Worthy over the decades, perhaps he also came to the same conclusion. I may never know.

But what I do know is that we in Atlanta have an opportunity to create a winning model for our institutions, our communities and our city.