There is a vortex of activity revolving around renewable energy here in the state of Georgia. Can you feel it?

These past couple of weeks have been monumental for Atlanta. We had two of the leading minds on carbon and renewable energy in the country, if not the world, speak separately and yet with the same voice several times to local audiences.

Who were they? Dr. Richard Sandor the chairman of the Chicago Climate Exchange; and Jigar Shah the chief executive director of the Carbon War Room, a non-profit started by Sir Richard Branson to help produce solutions for businesses that are interested in reducing their energy consumption specifically to save money.

Yes, that’s right. The purpose is to make businesses financially more sustainable rather than about saving the environment. It just so happens that the solutions help the environment too.

The theme of their talks was that carbon markets and renewable energies are the emerging markets to create wealth and new businesses.

Note the message was not that it’s the right thing to do for the environment or that it’s the way America can charge back and lead the way in the next version of the global economy.

The message was loud and clear — if you are interested in hopping on the next generation of wealth to be created then you better get on board now.

The discussion solely reflected on the economic viability of the creation of wealth from the renewable energy and cap and trade markets arena.

The two men shared a to-the-point message for Georgia. Don’t miss this opportunity, they said. Georgia can be part of this wealth creation too; grow businesses and jobs and help the environment along the way.

Fast forward to this past week when Georgia Power presented its Integrated Resource Plan (IRP) to the Public Service Commission.

The Atlanta Business Chronicle ran a lead story about Georgia Power’s solar efforts. Smith, Gambrell and Russell had a feature article in the firm’s current magazine about federal incentives for renewable energy and how this can help the Southeast.

Renewable energy is simply on everyone’s mind. The IRP outlines Georgia Power’s plans to develop new energy production for the next three years. The proposed IRP does not include any renewable energy strategies. The plan presents three line items: Plant Washington – coal, the Nuclear Plant and an unspecified number of natural gas plants.

The last time I checked, coal, uranium and even natural gas are all finite. You actually have to mine all three. Once that mine is tapped then you have no choice but to move and dig somewhere else. Eventually there will be no other place to dig.

Unlike wind, biomass, and solar, which are all arguably everlasting, the three proposed plants are long term in the minds of stockholders. It will take 25 years to build the nuclear plant alone. But in the minds of people who plan “sustainable communities,” it’s a blip on the time line. A coal plant will only be around about 40 years. It’s safe to say that wind, sun and plants will all be here for hundreds of years.

Which leads me back to our esteemed speakers. Although their discussions about renewable energy and wealth were short term, about 15 years, the results from these types of investments are much broader in scope.

Jigar Shah at Southface’s Visionary Dinner presented a forward thinking IRP. The proposal Shah would have submitted would cost $500 million less, created more than 100,000 construction jobs, and doubled the amount of long term jobs. Think about all the tax revenue the state will miss by not adopting such a proposal.

Georgia Power and the Southern Co. have been wonderful corporate citizens to the State of Georgia and even to the Southeast. Their leadership in providing productive solutions to our energy needs has proven solid over the past 100 years. The following chart, however, illustrates a 21st century solution that would benefit many more people and would also reward Southern Co.’s stockholders.

Additionally, Dr. Sandor said we have now reached a point where air and water will be turned into commodities. There is no turning back. Decision makers need to be serious about creating new jobs to help in the short term and find ways to create renewable energy solutions for the long term.

Georgians owe a great deal of gratitude to the Southern Co. and Georgia Power for providing inexpensive energy but by reconceptualizing the current Intergrated Resource Plan, Georgia Power stands to gain in multiple ways.

In the end, I have confidence that the Southern Co. and Georgia Power will become leaders in the emerging energy conversation. So the question is not if, but when, that will happen. 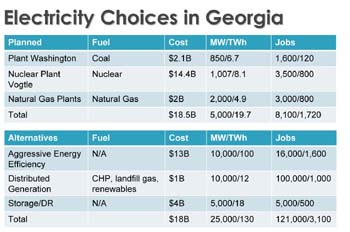