Bipartisanship is still possible — even in a polarized state like Georgia.

That bipartisanship was in full force on Monday, Aug. 16 when U.S. Rep. James Oberstar (D-Minnesota) gave a luncheon speech at the Council for Quality Growth’s 25th anniversary celebration at the Westin Atlanta Perimeter North.

Oberstar, who chairman of the U.S. House Committee on Transportation and Infrastructure, clearly had the clout to bring together politicians on both sides of the aisle.

Democratic gubernatorial nominee, Roy Barnes, was not in town, which was a bit of a missed opportunity to make the all important connection with one of the leading forces in Washington, D.C.

Oberstar picked up on the unusual bi-partisan sentiment in the room — Georgians who are hungry for transportation and infrastructure dollars to keep the region competitive. 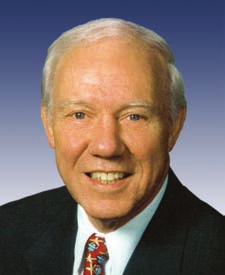 “I’ve never seen a Democratic road or a Republican bridge,” Oberstar told the audience, emphasizing that his committee is about building a modern transportation infrastructure in the United States.

“Unfortunately, we’ve had little progress of reaching agreement with this administration, the Senate and even the House,” Oberstar said. “The lack of political will has caused delay.”

Oberstar said the nation needs to invest about $450 billion a year on surface transportation, which is roughly $200 billion more than what we regularly spend.

He said the nation needs $8 billion to bring the nation’s top 50 transit systems to “a state of good repair.” Oberstar then thanked MARTA general manager, Beverly Scott, for telling Congress the importance of federal support for operating dollars.

But the thrust of Oberstar’s message was a visionary one of transforming transportation in the United States — just as what has been underway in Europe and China.

But China also is investing in airports and high speed rail.

“They are completing an 800-mile rail line from Beijing to Shanghai,” Oberstar said. “We have got to do the same kind of investment and more of it.”

In fact, Oberstar called for the kind of vision that President Ike Eisenhower had in the mid-1950s for a 47,000 mile interstate system — to be funded by a 3-cent gas tax. And the House then voted to increase that tax by a penny.

“That one-cent passed on a voice vote in the House,” Oberstar said, adding that such a move would be impossible today. “But they had vision, and they invested in that vision.”

Today, we are where the nation was in the 1950s — needing to recommit to our nation’s infrastructure. But this time, transit and rail need to be at the forefront, and the nation needs to rally behind a current day mission similar to Eisenhower’s in the 1950s.

“We need to have the same vision and investment of the movement of people and products in our economy, and it must include passenger rail service,” Oberstar said.

The question always is how do we pay to implement that vision at a time when leaders on both sides of the aisle shy away from anything that could be viewed as a tax increase.

And yet, if we don’t invest in our infrastructure, we will be stuck in limbo. Although we are still the largest economy in the world, other countries are investing in all modes of rail and other infrastructure. At some point in time, our lack of investment will cause us to backslide in comparison.

As some of my readers already know, my favorite tax is the gas tax. A higher gas tax directly encourages a more efficient use of fuel. It leads to people buying cars that use less gas, it reduces our dependence on foreign oil, and it stimulates the development of more compact communities.

The problem with the gas tax is that it’s applied to the volume purchase of fuel, and as people buy less gas, less tax revenue is collected. For example, the federal gas tax currently is 18.4 cents per gallon. In Georgia, the gas tax is only 7.5 cents, among the lowest in the nation.

What if we could change the gas tax to be applied like a sales tax, so as the cost of gas increases, so would the tax revenue.

At first, the tax could be revenue neutral to what we currently pay. But as gas prices inevitably increase, then the tax revenue would keep pace.

In Georgia, however, we would need to make another major adjustment. We would need to ask voters to change the constitution to allow gas taxes to go to all modes of transportation rather than just roads and bridges.

Both Georgia and the nation are in dire need to increase the amount of money we can invest in transportation — primarily rail, transit and non-fuel modes, such as bicycles and walking.

We have had a dearth of true modern-day visionaries who can see the future and can be persuasive advocates for investing in that future. Ideally, we could generate a bi-partisan campaign to make strategic transportation investments — both in Georgia and in the United States.

As Oberstar said at the end of his talk when he described France’s investment in its high-speed rail system: “First we need to have that vision. We need to have an Eisenhower-like vision of the future.”

Note to readers: Sorry I didn’t write a new Maria’s Metro column last week. I was not feeling well, and I have been working on a couple of projects that have been eating up a lot my time.