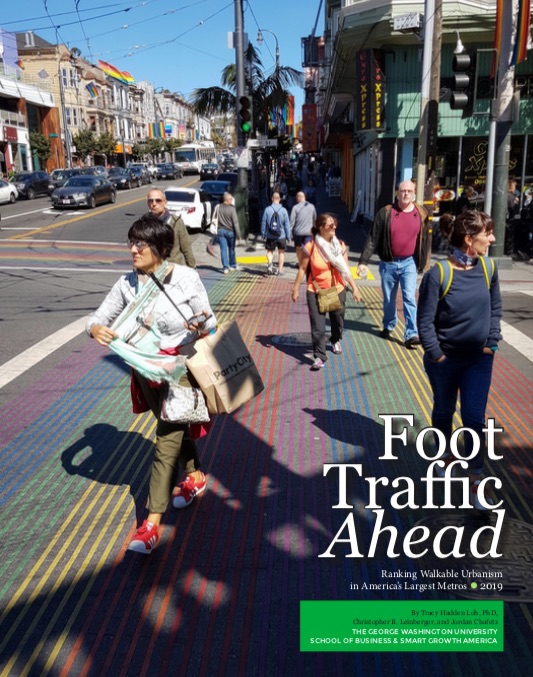 The cover page of the 2019 Foot Traffic report

Forget all the perceptions of metro Atlanta being a poster child for sprawl.

A new report looking at the urbanizing trends in the country’s 30 largest metro areas shocked one of the co-authors – Chris Leinberger, a real estate expert who is a professor at the Center for Real Estate and Urban Analysis at the George Washington University School of Business.

“Atlanta shocked me,” Leinberger said in a telephone interview previewing Monday’s release of the 2019 Foot Traffic Ahead report, which ranked walkable urban areas in the country’s largest metro areas. “Who would have thought that Atlanta would be in the same category as Seattle?”

The report found that Atlanta ranked No. 9 among the largest metro areas on the percent of walkable urban real estate for income properties – office, retail and multi-family. 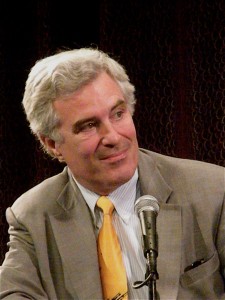 Leinberger used to work in Atlanta in the 1980s when its suburbs were booming and the central city was languishing. In the 1990s, he described the Atlanta region as “the fastest-growing human settlement in the history of the world” in terms of its sprawling development practices.

In his research, Leinberger studied the number of walkable, urban spaces (which he calls “walk-ups”) compared to the number of drivable, suburban places in the top 30 metro areas in the country.

“We found that there are 761 walk-ups in the larger 30 metropolitan areas in the country, and those 30 metro areas represent 56 percent of the gross domestic product in the county,” Leinberger said. “Drivable suburban are those places with very low density, and the only way to get around cars and trucks. The other is walkable urban, where you have multiple ways to get from one place to another.”

The Atlanta region has a total of 27 walk-ups, including areas lie Midtown, downtown, Virginia-Highland, the Perimeter and Avalon.

Atlanta ranks 10thin walkable urban rental rates for income properties. It has a 63 percent premium per square foot over the balance of the metro area real estate, which generally drivable areas such as business parks and regional malls. Atlanta was tied with metro Cleveland for walkable urban absorption – both had 57 percent of all net new absorption of income product in the real estate cycle between 2010-2018.

In looking to future trends, the report showed that walkable urban areas in Atlanta had a  138 percent higher absorption of income property over past nine years in comparison to the 2010 base year. That meant that drivable real estate is dramatically losing market share. The last time market share shifts of this magnitude occurred in the region was when drivable sub-urban development was gaining market share at this rate in the 1980s…but in the opposite direction. 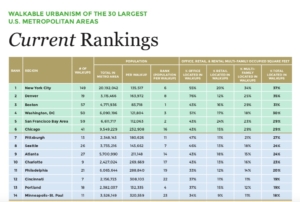 Detailed ranking of the top 14 walkable urban areas in the country according to new report (Source: Center for Real Estate and Urban Analysis at the George Washington University School of Business and Smart Growth America)

“The other thing that really shocked me about Atlanta is that your college educated workforce has gone through the roof,” Leinberger said. “You are now No. 2 in the country after Washington, D.C. with 46 percent of your workforce over 25 having a bachelor’s degree or higher. That was stunning.”

That bodes well of the Atlanta region’s growth potential as more and more companies are gravitating to areas with an educated workforce. And they are both attracted to the walkable urban places rather than drivable suburban places.

“You are on the right path by investing in walkable urbanism,” said Leinberger, adding that Atlanta was going to become economically more vibrant by investing in transit and walkable communities.

Of the 761 walk-ups in the 30largest metro areas, 17 percent are in the suburbs.

The nation’s metro areas with the most walkable urban real estate are New York City (which has 149 walk-ups), Denver, Boston, Washington, D.C., Chicago and San Francisco.

Leinberger said that doesn’t mean that walkable urban real estate is contributing to our region’s problems with equity. 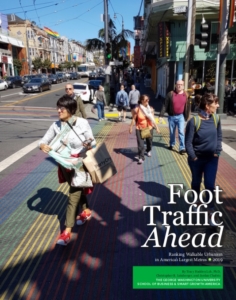 The cover page of the 2019 Foot Traffic report. Click to open the report.

Smart Growth America, along with Cushman & Wakefield and others, was one of the partners in the study of the 30 metro areas.

“Foot Traffic Ahead shows that the future is walkable, mixed-use places,” said Calvin Gladney, president and CEO of Smart Growth America. “Metro areas have a choice to make: continue distorting the market by subsidizing an outdated form of sprawling growth that separates residents from their daily needs, cuts them off from opportunity, and costs more to serve and maintain. Or, realize the massive potential benefits of meeting the pent-up demand for walkable places—which is one of the best ways to help more residents live in places that are affordable, healthy, and prosperous.”

Leinberger summed up his thoughts about Atlanta by saying: “You are doing a lot of things right.”

Previous Article
‘The Dead Don’t Die’ – most of the movie is ‘watchable’
Next Article
A 17-mile trail system taking shape in Sandy Springs to connect parks, neighborhoods, destinations