School might be back in session, but that doesn’t mean the summer fun has to end! This weekend, the 85th annual Atlanta Dogwood Festival is coming to Piedmont Park. The festivities include a 5K race, booths from over 200 artists and a variety of live performances.

On to other news around the metro area: 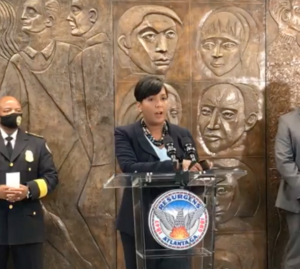 During Tuesday’s press conference, Mayor Keisha Lance Bottoms urged residents to get vaccinated against COVID-19. (Image taken from the livestream.)

On Tuesday, Aug. 3, Atlanta Mayor Keisha Lance Bottoms held a press conference about the rising COVID-19 cases and crime rates in the city.

Bottoms gave updates on recent tragedies, like the murder of Jakari Dillard, a 17-year-old who was shot at the Anderson Park pool. She announced that APD has identified the killer, and there is a warrant out for their arrest.

Atlanta has also been rocked by an unsolved crime, including the fatal stabbing of Katherine Janness in Piedmont Park. The police have yet to publicly name any suspect, and the city is offering $20,000 for helpful information.

The reward amount was originally set at $10,000, but PETA doubled the reward, as Janness’ dog, Bowie, had his life taken that night, too.

Bottoms asked reporters to get information directly from APD and to avoid sensationalism.

“I know there have been several rumors that there is a serial killer on the loose in our city. We don’t have any evidence of that. Also, that this was a hate crime. As of now, we don’t have any proof of that as well,” she said. “That’s not to say that things won’t change, but at this point, we don’t have any confirmation of either of those things.”

The City of Atlanta was in phase four of the five-phase plan, but with rising rates of infections and an increase of the Delta variant, Bottoms reports that the city could soon return to phase two. Prior to the extension, almost 20 percent of metro Atlanta renters owed back rent, according to Atlanta Civic Circle. (Credit: Unsplash)

But on Aug. 3, the CDC issued a new eviction moratorium for areas of substantial or high transmission, which applies to most counties in Georgia, according to their data.

The eviction ban covers 80% of U.S. counties and 90% of renters, according to CNN, and will last until Oct. 3. Renters behind on rent must file a declaration with the CDC and prove that the pandemic impacted their financial stability to be protected from displacement.

Some landlords aren’t happy. A group of real estate groups and landlords filed an emergency motion to uphold the U.S. Supreme Court’s ruling that the moratorium couldn’t be extended past July 31.

Judge Dabney Friedrich of the U.S. District Court for the District of Columbia set a deadline for the Justice Department to respond by Friday, Aug. 6, at 9 a.m., and the plaintiffs must respond by 7 p.m., according to CNN. 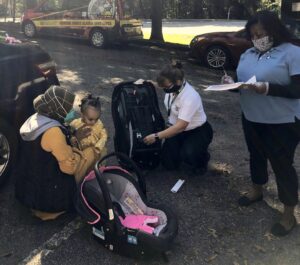 A mother learns how to properly use a child restraint from Scottdale Early Learning. (Credit: SEL)

A DeKalb County early learning program that helps low- and moderate-income families learn to provide care and educational support for infants and children has won a national award for creating a distance-learning program during the coronavirus pandemic.

Based in Scottdale, SEL received the Losos Prize for Innovation from the international organization Parents as Teachers program. PAT awards two Losos Prizes a year to PAT blue ribbon affiliates. The award is named for Carolyn Losos, a noted advocate of early childhood learning and founding board member of St. Louis-based PAT.

The PAT program helps adults learn to teach their children, and helps watch for signs of developmental delays and health issues, Mason said in the statement: 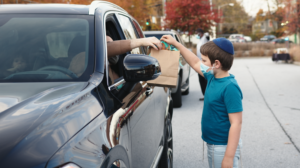 The feature documentary titled “Atlanta The City Too Busy to Wait” was featured in the 2020 Atlanta Jewish Film Festival. (Credit: Jacob Ross)

Over $21 million in funds to support Atlanta’s Jewish community

The Jewish Federation of Greater Atlanta has committed to investing $21.4 million into programs and resources that serve the Jewish community in the next year.

The funds will support the Atlanta Jewish community in several areas: inspiring Jewish journeys, making Jewish places, rising up to strengthen our communities and ourselves, moving towards global Jewish peoplehood and creating radically welcoming spaces.

The Atlanta Jewish Film Festival North, a mini-version of the annual film festival, receives a portion of these funds.

The festival will showcase five feature films and six short films. Showings will be offered in-person for the first time since the pandemic at the Aurora Cineplex in Roswell and online on Aug. 28 and 29.

Tickets to the Atlanta Jewish Film Festival North can be found here. 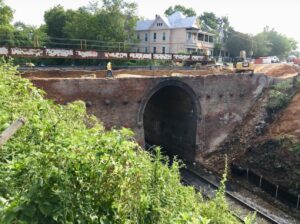 Bricks from the demolished College Street bridge, in Macon, were reused in a nearby monument that details the bridge’s history. (Credit: Liz Fabian, CC-BY-SA, via bridgehunter.com)

Bricks from the demolished College Street Bridge in Macon have been reused to build an historic monument in a bridge replacement project that won GDOT a top award in the category of, “Quality of Life/Community Development, Small Project.”

The task was to raise two bridges to raise their vertical clearance, which was necessary to accommodate the double-stacked train cars used to transport cargo to and from the ports of Savannah and Brunswick, according to a statement released Wednesday by the Georgia Department of Transportation.

GDOT highlighted the fast design/build aspect of the project. The bridges had to be replaced by August to avoid any delays in freight mobility. Using the design/build business model that has become a standard for GDOT, the Pio Nono Avenue bridge was completed in 25 days and reopened June 2. The College Street bridge reopened in February.

Community engagement and the historic preservation aspects of the project were highlighted in a statement issued by the entity that made the award, Southern Association of State Highway and Transportation Officials:

The project tied for first place, out of 80 projects, in the American Transportation Award sponsored by the regional affiliate of ASSHTO, the U.S. Chamber of Commerce and AAA, according to GDOT’s statement.

The festival has two competitions, one for high school students and one open to the general public.

Films must be submitted by Oct. 15, and accepted works will air at screening events the weekend of Oct. 29.

Click here for more information on the Bring Your Brilliance Short Film Festival. 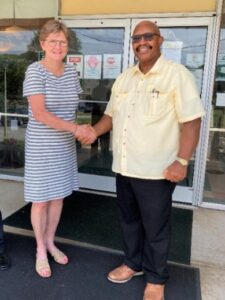 Sadie G. Mays is a nursing rehabilitation center in Northwest Atlanta that offers hospice care and nutritional and rehabilitative services.

Robinson made history as the first African American certified by the American College of Healthcare Administrators in 1993.

Beth Laxton, who served on the board for 11 years, has replaced Robinson as CEO.

“Sadie G. Mays has always had a special place in my heart because of our mission – serving the community,” Laxton said in a press release.

She previously worked as the Chief Operating Officer and Administrator at the William Bremen Jewish Home for over 30 years.

Aug. 5 would have been Sadie Gray Mays’ 121st birthday. Consider donating to celebrate her birthday and keep the Center’s 74-year-legacy of service going strong.

In his talk to the Rotary Club of Atlanta on Aug. 2, Lt. Gov. Geoff Duncan urged Georgians to get vaccinated to prevent the spread of COVID-19 and its variants.

Duncan’s position was stronger than the one Gov. Brian Kemp has taken. Instead of coming out forcefully and urging people to get a vaccine, Kemp told Georgians to talk to their doctors, pharmacists or health providers about getting vaccinated.

Without mentioning the governor by name, Duncan said that sometimes it’s difficult for people to reach out to their health providers.

“Many Americans are one question away from being vaccinated,” said Duncan, who said he has been able to answer questions that led to people being willing to get the vaccine.

Duncan said there are strong reasons for Georgians to get vaccinated because that will “keep our businesses open; keep our schools open; and keep our streets safe.”

Duncan, who has announced that he will not seek re-election, reminded Rotarians that he still has 17 months in office, and he intends to do what he can to build a more inclusive and innovative economy in Georgia. His vision is to make Georgia the technology capital of the East Coast. A big challenge will be to get the biggest thinkers with the biggest ideas to stay here in Georgia rather than have their ventures be bought out by West Coast companies.

Duncan also said he will work to build GOP 2.0 to help reduce the polarization that exists in today’s political environment.

“Both political sides are guilty of trying to politicize every single issue,” said Duncan, who said he’s not looking to start a new party – just bring a new approach to the existing Republican party. said. “GOP 2.0 will make both parties find better solutions for real problems and for real people.” 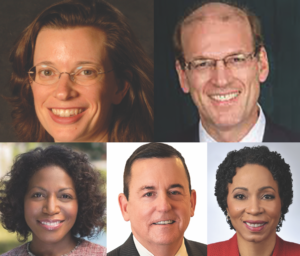 Nonprofit leaders in Georgia get recognized

Two Georgia leaders were named to the NonProfit Times Power & Influence Top 50 for being able to maneuver their organizations through the COVID-19 pandemic.

“The year was a showcase of frontline heroes, many of whom were tied to nonprofits, and leaders who with their staffs found a way to adapt and overcome the hardship of a 100-year pandemic,” according to the publication.

The 2021 Top 50 honorees were selected from a group of about 300 top executives for the impact they have had during the previous 12 months.

Michelle Nunn, president and CEO of CARE, was recognized for innovative micro-savings programs and business training for women and driving the evolution with “her own entrepreneurial spirit” and working to help the developing world get vaccinated.

Jonathan Reckford, CEO of the Habitat for Humanity International, was recognized for being “a serial networker and collaborator in acquiring financing, land, and down payment assistance” in leading the “world’s largest homebuilder.”

Barron Segar, president and CEO of World Food Program USA in Washington, D.C., was an executive with UNICEF in Atlanta before moving to New York. He was recognized for going after billionaires to step up during the pandemic.

Lisa Hamilton, president and CEO of the Annie E. Casey Foundation in Baltimore, Md., spent 14 years at Atlanta-based UPS before being named president of the UPS Foundation. She joined the Casey Foundation in 2011. She is being recognized for her economic strategies for children and neighborhoods that are having an impact on the city.

Helene D. Gayle, CEO of the Chicago Community Trust, used to be the CEO of Atlanta-based CARE. She is being recognized for her creating a coalition of two dozen Chicago businesses, philanthropies and academia working for collective action.