Mother's Day is right around the corner! The celebration accounts for 24% of all flowers bought on holidays, according to Society of American Florists. (Credit: Hannah E. Jones)

Mother’s Day is on the horizon — Time to kick back with family, whether in-person or via FaceTime, and enjoy the day. Versions of Mother’s Day have existed for quite a while, but the second Sunday in May officially became a national holiday in 1914 under President Woodrow Wilson.

Through the years, Mother’s Day festivities have broken a few records, like the highest volume of phone calls in the U.S. and the busiest day for restaurants.

More news from around the city:

Ex-Atlanta Police Officer Garrett Rolfe has been reinstated — but on a technicality.

But the city’s civil service board this week ordered Rolfe’s reinstatement after finding that the police department made several errors on dismissal paperwork and didn’t follow the city code.

Rolfe will remain on administrative leave until his criminal charges are resolved, the Atlanta Police Department told NPR.

The board was not determining whether Rolfe’s actions on that June night were criminal, according to its five-page statement

Rolfe’s attorney Lance J. LoRusso said his reinstatement is “the first step in the total vindication of Officer Garrett Rolfe.”

“Had immediate action not been taken, I firmly believe that the public safety crisis we experienced during that time would have been significantly worse,” Bottoms said. 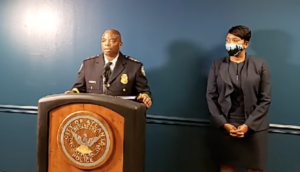 Bottoms described Bryant as a “capable, able, solid leader” and asked the City Council to confirm him immediately.

She added that a national search can be conducted as needed following the mayoral election. 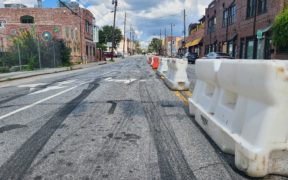 The fight against street racing continues

On May 3, Gov. Brian Kemp signed House Bill 534 into law, aiming to curb drag racing around the city and metro area.

The bill does several things, like defining the new crime of promoting a drag race. Penalties could now reach as high as $5,000 for repeat offenders.

“HB 534 simply adds another tool to the tool belt for these officers to help keep our streets safe,” Kemp said.

In just one weekend, from April 30 to May 2, the Atlanta Police Department handed out 184 citations and made six arrests for street racing.

The race for Georgia Secretary of State gets bigger

State Representative Bee Nguyen, D-Atlanta, has joined the race for the secretary of state’s seat.

Nguyen, the daughter of Vietnamese refugees, is the first major Democrat to announce a run against incumbent Brad Raffensperger.

Nguyen outlined her priorities in her announcement video — equity, efficiency and access to good schools, safe homes, and strong communities.

“Every person deserves to have their voice heard in our democracy,” she said.

Hice has the backing of former President Donald Trump. Trump is vocal about wanting Raffensperger out of office and wrote in a statement, “Unlike the current Georgia secretary of state, Jody leads out front with integrity.”

Trump also promised to advocate against the re-election of Gov. Brian Kemp in 2022.

“I’m going to be here in a year and a half, and I’m going to be campaigning against your governor and your crazy secretary of state, I guarantee you,” Trump said back in January.

Atlanta-based Chick-fil-A has pledged $500,000 towards the leadership development program that will prepare students for hospitality and restaurant management after graduation.

“We are thrilled to continue our partnership with Chick-fil-A,” said Morris Brown President Kevin James in a statement announcing the pledge. “I look forward to Morris Brown being a direct pipeline of diverse leaders within the career fields of hospitality and organizational leadership for organizations like Chick-fil-A.”

“One of our goals is to ensure that every student achieves their full potential,” Vice President of Corporate Social Responsibility for Chick-fil-A, Inc, Rodney Bullard, said in a statement. He continued that the way they achieve that is through education.

The fast-food company provides scholarships, educational programs, grants and more to students throughout the nation.

Construction for the 90,000 square-foot facility will occur later this year and no word on when the leadership program will begin.

Polk County, Fla. had the largest methamphetamine bust in the county’s history. Why does that matter here? Because an Atlanta inmate had a hand in the operation, according to a Florida lawman.

Judd said that several people involved in the drug ring are undocumented in the U.S., and Judd expressed support for strong border control, adding “there’s a crisis at the border.”

But the person that Judd called the “mastermind” is a white man in federal prison. According to the sheriff, one Brian Staton arranged the sale and delivery of meth to the Florida county, all while sitting in the Atlanta federal pen.