A nighttime view of the Atlanta skyline. (Photo by Christopher Alvarenga, Unsplash)

The City of Decatur school system is giving employees until the end of October to get the COVID-19 shot, according to WABE, and appears to be Georgia’s first school district to implement this mandate. Staff can also complete the exemption process, which replaces the vaccination requirement with a daily rapid test.

The school board plans to vote on requiring vaccinations for students next month. 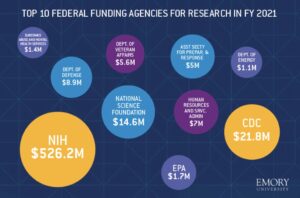 Atlanta’s quest to establish its niche in global health was furthered by Emory University’s report Wednesday of $847 million in research grants in the fields of medicine, public health and nursing in the fiscal year that ended Aug. 31.

The remaining sum, as Emory noted in a statement, funded research into basic sciences; clinical and social sciences; creative arts, business and theology.

One such topic involves an exploration of racial history and the 1906 Atlanta Race Riot led by Hank Klibanoff, a veteran journalist who shared the 2007 Pulitzer Prize for History for the non-fiction book, “The Race Beat: The Press, the Civil Rights Struggle, and the Awakening of a Nation.” 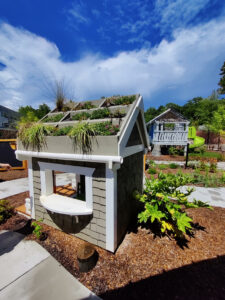 Each playground design aims to increase the connection between kids and the natural world.

It’s opening at a time when students are connecting maybe too much with their screens. Tweens were spending an average of 4 hours and 44 minutes on their devices daily in 2019, according to a study by Common Sense Media — not including school work that’s gone online since the pandemic.

The Grove Park site features two playgrounds with treehouses, “mud kitchens,” sensory gardens and chalkboards. It even includes a reading nest, where kids can hang out or add grass and sticks to the nest.

You’ve seen one of these biophilic playgrounds too — the classic ATL slide in Woodruff Park, which is one of ten projects in metro Atlanta.

“Play is such an important part of early childhood learning and development,” said Cynthia Gentry, founder and president of Living Playgrounds, in a press release. “After being cooped up inside for a year, we want to inspire, captivate and challenge the children with all that is possible outdoors. We hope we’ve done that by using natural elements that we find in our everyday lives and landscapes, but not usually found on playgrounds.” 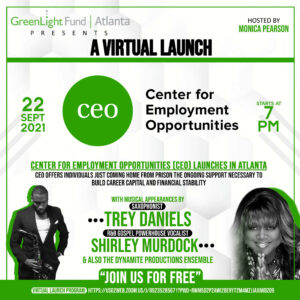 Log in to welcome CEO to Atlanta on Sept. 22. (Photo courtesy of Greenlight Fund Atlanta)

The Center for Employment Opportunities (CEO) is coming to metro Atlanta, its first office in Georgia, in collaboration with GreenLight Atlanta. The two organizations aim to increase economic growth and mobility among folks who are coming home from prison.

The center goes all out with its services, offering employment training and supporting those in the job search.

After completing a one-week job-readiness orientation, participants are guaranteed a position on a transitional work crew. Afterwards, CEO will support members for a year after finding full-time work.

GreenLight Atlanta chose to invest in CEO after a year-long partnership investigation with community leaders and residents to identify systematic challenges within the community. Their findings included criminal justice reform and “smart decarceration” for those returning home as ways to close socioeconomic gaps.

“CEO believes that everyone, regardless of their past, deserves a chance to work toward a stronger future for themselves, their families, and their community,” GreenLight Atlanta Executive Director Joli Cooper said in a press release. “We affirm that belief and remain committed to helping expand economic opportunity and financial stability in metro Atlanta, no matter someone’s background or zip code.”

The Emory University School of Law is receiving $5 million from the foundation tied to the biggest utility company in the southeast — all for injustice.

The Southern Company Foundation’s grant, the largest single gift to Emory Law, will go to the Law Center for Civil Rights and Social Justice.

The new center focuses on human rights and social justice and will offer scholarships, research and community outreach to help those who have experienced injustice.

“By making this historic and timely gift to Emory University, they have sent a powerful message about our shared commitment to civil rights and social justice. This grant will provide our students and scholars with the resources to lead in their fields and make breakthroughs to serve communities in Georgia and across the nation,” Emory President Gregory L. Fenves wrote.

This is another win for the new center after Darren Lenard Hutchinson, a legal scholar and social justice advocate, was named the inaugural John Lewis Chair in April.

Another $2 million from the foundation will support the Winship Cancer Center and other Emory initiatives. 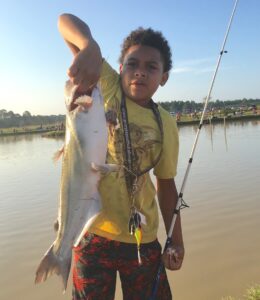 Bragging rights don’t get much better than catching a huge fish, as this youth did during a previous Outdoor Adventure Day in Berrien County. (Photo courtesy of Georgia Department of Natural Resources)

Adults can fish for free on Sept. 25, which offers an opportunity for adults to take children fishing without having to spring $15 for a fishing license or $5 for a one-day trout license to drop a line in state waters.

Georgia is waiving the license requirement as part of its celebration of National Hunting and Fishing Day. Georgia parks have scheduled a number of special events around the state. Children under age 16 year always may fish without a license in Georgia waters.

The event in Northwest Georgia is near Summerville, at the James H. “Sloppy” Floyd State Park. It will offer prizes for tagged fish caught by children under 16 years, along with free hot dogs, chips and drinks provided by the park’s friends group. A $5 parking fee will be charged.

Congress designated National Hunting and Fishing Day in 1972. The Census conducts one of the oldest recreation surveys on hunting and fishing, since 1955, and the latest report is packed with “who knew it?” tidbits – such as the nation’s 36 million anglers spend $46 billion a year on their sport. 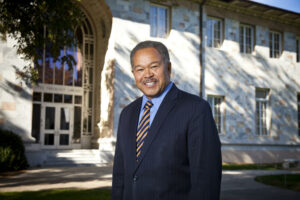 Robert Michael Franklin is selected to serve a five-year term on the Board of Directors at the CDC Foundation, which helps manage philanthropic and private-sector resources that support the CDC.

Among many other positions, he’s a past president of Morehouse College and is the senior advisor to the president of Emory University. He also holds the James T. and Berta R. Laney Chair in Moral Leadership at the Candler School of Theology at Emory, where he guides students to explore moral leadership across different cultures and situations.

He also worked on the Human Rights Campaign’s project council, aiming to expand inclusion for members of the LGBTQ+ community at HBCUs.

“Robert is an impassioned educator, theologian and leader,” Judy Monroe, president and chief executive officer of the CDC Foundation, said in a press release. “I welcome his experience and value the insights and perspectives he will bring to our board, including his guidance on the path toward health equity for people in the United States and across the globe.”

Previous Article
As General Assembly Gathers, Give the WHO Its Due
Next Article
Nonprofit urges 10 reforms of Atlanta’s Neighborhood Planning Unit public input system